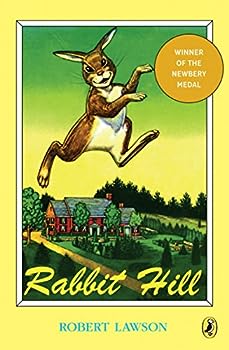 (Part of the Rabbit Hill Series)

It has been a while since Folks lived in the Big House, and an even longer time has passed since there has been a garden at the House. All the animals of the Hill are very excited about the new Folks... This description may be from another edition of this product.

Rabbits and squirrels and mice, oh my!

Published by Thriftbooks.com User , 18 years ago
On a hill in the peaceful Connecticut countryside stands an old foursquare house, in which for many years there lived a family of good Folks. They respected the Small Animals that shared their Hill, their children played hide-and-seek with them on warm evenings and their old lady Spaniel even raised an orphaned fox cub. Then they moved away, and hard times fell upon the Hill. The Small Animals, forced to do their "marketing" in Fat-Man-at-the-Crossroads' garden, have wondered for a long time whether they would ever get such Folks again. Now, at last, New Folks are coming, and the question in every Animal's mind is, what kind of Folks will they be? "Rabbit Hill" is perhaps Lawson's best-known book, though he wrote many that deserve to be returned to print. Based upon the actual hill on which he lived, it follows the adventures of the Rabbit family, Father (a Southern gentleman from the Kentucky Bluegrass who talks like a dictionary), Mother (a chronic worrier), Little Georgie, and the permanently-visiting Uncle Analdas, and their many animal neighbors--Willie Fieldmouse and his vast family, the forgetful Gray Squirrel, Foxy, Phewie the Skunk, old Porky the Groundhog, the Red Deer and his Doe and Fawn, Mole for whom Willie must often "be eyes," and more. His Animals are drawn lovingly and accurately both in words and pictures (he did his own illustrations) and behave recognizably as we might expect them to do if they were intelligent enough to speak to one another. And there's a surprising amount of excitement for such a short book: Georgie's flight from a pursuing dog and his remarkable leap across Dead Man's Brook, the question of whether the Folks will be Good Folks or not, and the aftermath of Georgie's mishap with a car on the Black Road. The close of the tale is heart-warming and beautiful. This is a kids' book to which I return over and over.

At 42, I still remember this book

Published by Thriftbooks.com User , 18 years ago
As a kid, I really preferred non-fiction to fiction (and still do!) But this book helped me accept my very own dilemma---fitting in. Whatever abilities a child has, somewhere along the line, most begin to wish that they were someone else. Robbut has this problem too. As a rabbit, he just doesn't see much use or elegance in his tail. Robbut is given the opportunity to try out other tails. Each one ends in misadventure or disatisfaction. The story concludes with Robbut's new found appreciation of his very own tail. I am SO HAPPY to be able to find this book for my own kids. Some of them don't quite fit in either!

Published by Thriftbooks.com User , 19 years ago
One great book I've read is Rabbit Hill by Robert Lawson. It contains advernture, expression, and animals. There's a skunk (who eats garbage), a red buck, a fox, a mole, fieldmice, a cat, dogs, rabbits, and new Folks. The new Folks don't set out traps, poisons,etc., but grow extra fruits and vegetables for the animals! The new Folks even put up a sign that reads 'Please Drive Slowly on Account of Small Animals'.(Talk about nice!) There are food problems,tragedies, and other plots (such as the main character,Little Georgie, being hit by a car, will he survive?). I enjoyed this book because the plots weren't too serious and they weren't difficult to figure out. If you like stories with happy endings, or stories with animals, you will enjoy this book!

Published by Thriftbooks.com User , 20 years ago
New Folks are coming to the Hill! All of the animals are very excited, especially the rabbit Little Georgie. Times have been hard, food scarce - what a change New Folks would provide! But would they be decent Folk, or gun-slingers? The whole Hill watches and waits. The New Folks arrive, and they seem decent people - very decent indeed, and understanding of the needs of Small Animals. And it seems that good times have finally arrived - until something terrible happens to Little Georgie, and the Hill becomes filled with spite. Will good times ever TRUELY come? I love the characters - Father, the prim Southern gentleman with a love of bluegrass, Mother, the chronic worrier, Uncle Analdas, the grumbling bachler rabbit; and of course Little Georgie. I love the illustrations as well!Subnote: Be sure to buy a copy with the Newbery medal seal displayed on the cover, copies without it cut out all mention of the Folk's black cook, Sulpheria. While she is not an important character, we just can't let censorship get in the way >: -(

Published by Thriftbooks.com User , 21 years ago
I bought this book to accompany the purchase of a rabbit for my son. We used this book for our family's read aloud time. We are already fans of Mr. lawson so it was with high hopes that we began this wonderful book. It is about animals and the hardships creatures encounter as a result of man's carelessness and selfihness. We rarely think about the impact our daily existence has on nature, especially the one that makes up our backyards. When kindly people move into the house on Rabbit Hill, the pooor existence of the animals takes a definite turn for the better. The humans are kind and are able to co-exist with all the different kinds of animals on their property. This book is fun but it an allegory for modern times as well. it ends with the placing of the statue of St. Francis of Assissi in the garden; a powerful reminder that we are stewards of God's creation.
Trustpilot
Copyright © 2022 Thriftbooks.com Terms of Use | Privacy Policy | Do Not Sell or Share My Personal Information | Accessibility Statement
ThriftBooks® and the ThriftBooks® logo are registered trademarks of Thrift Books Global, LLC