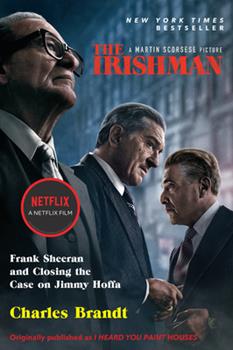 The Irishman (Movie Tie-In): Frank Sheeran and Closing the Case on Jimmy Hoffa

Published by Judy , 2 years ago
I enjoyed the facts of the book n I liked the fact that Joe Biden was mentioned several times in this book just goes to show what a gangster he is

Published by Thriftbooks.com User , 17 years ago
Charles Brandt has proved twice over the last twenty years that he is a pretty good author. This non-fiction work (the title refers to the code Mafiosi used to inquire whether someone did hits -- the blood spatter being the paint) detailing the life of Frank Sheeran and his buddy Jimmy Hoffa is first rate. Brandt combines passages of Sheeran's own words with the author's background and fill-in's to tie together an impressive mob memoir. Frank Sheeran, besides hailing for a time from my own Wilmington, Delaware, was one vicious and disciplined mobster. This is his story. His hardscrabble life (his father would make him fight people in bars as a teen for beer -- the beer going to his father, not Frank) perhaps made a life a amorality unsurprising. What is amazing is that this recount by an old man facing death is not a repentance for a life lived horribly wrong, but a simple detailing of the events of that life. The banality of Sheeran describing his career -- hits, butchering, beatings told the way an accountant would detail audits or financial statement presentations -- is fascinating and speaks to a man wholly absorbed in doing his part for organized crime and the Teamsters. Hoffa is presented as an interesting figure; one who starts using the mob for the benefit of "his" teamsters but makes the tragic mistake of believing he is too big to be bound by mob rules. His story and will to take over what was once the most powerful union in America is a remarkable tale in its own right and told interestingly in this book. Sheeran idolizes Hoffa. Then he kills him (according to Sheeran). The punch of this book is a detailed and blow-by-blow telling of Hoffa's supposed meeting with his executioner (the mob supposedly sends someone you would never expect when it is decided you've pushed their patience too far) and the deed. Sheeran is detailed and convincing in his telling. Sheeran also hints that Hoffa and certain mob bosses were behind the JFK assassination as a payback for Bobby Kennedy's war against organized crime as a Senate attorney and later Attorney General. In fact, Sheeran thinks he may have delivered a package that was Lee Harvey Oswald's rifle to a contact in Baltimore days before the shooting of the president. Whether or not this is the true story of what happened to Jimmy Hoffa (and whether or not he was involved in JFK's assassination) will have to be for each reader to judge. But the story is one heck of an interesting ride into the sordid doings of organized crime. Mr. Brandt, you should pick up the pen more frequently.

Published by Thriftbooks.com User , 18 years ago
When I read this book's review in the NY Times, I knew I had to read it, and I was not disappointed. No one should miss this absolutely compelling and fascinating insider's story of his life with the Mafia, Jimmy Hoffa and the Teamsters.In addition to making some very astonishing revelations about Joe Kennedy, The Bay of Pigs and the assassination of John F. Kennedy, this book also reveals Frank Sheeran to be a rather likeable character. And that was a complete surprise to me. I anticipated a far more despicable personality.Is it all true? I think it is. Read it and make your call.

Great Story But Not Sure if It's True

Published by Thriftbooks.com User , 18 years ago
Sheeran now has three purported deathbed confessions: 1. In this book he shot Hoffa twice in the back of the head as he tried to run from the mystery house. 2. In a Detroit Free Press article (3/13/04), he got to the house after the deed was done and took the body to Vitale's incinerator. 3. In a Philadelphia Daily News article (3/17/04) he claims to have shot Hoffa while they were in the car after leaving the Red Fox.What surprises me is that no one has made an issue over his insinuation in the book that the mob assassinated JFK as a favor to Hoffa. He claims to have delivered the rifles to David Ferrie to take to Dallas. I have always believed it was the mob and Hoffa because of the pressure RFK put on them along with the double cross by Joe Kennedy to Sam Giancana.I really looked forward to buying this book. It gives some fascinating insight about the infiltration of the mob into the teamster's. Hoffa has the classic little man's syndrome and he sold out his fellow teamster's so he could be a big man. In the end, that probably led to his sad ending.Sheeran knows something.

"Brandt has reserved himself a place in literary history."

Published by Thriftbooks.com User , 18 years ago
Brandt--with his experience as a former prosecutor and Chief Deputy Attorney General of the State of Delaware and an expert on cross-examination--has provided more than enough evidence to, finally, solve one of the greatest mysteries of our time. His book is extremely well written, exciting to read, and very informative, as it dives into an amazing and fascinating life story of the real life Mafia hit man Frank Sheeran. This is better than any Soprano's episode ever written, and it is the "real deal." I couldn't put the book down! Know doubt, Brandt has reserved himself a place in literary history.
Trustpilot
Copyright © 2022 Thriftbooks.com Terms of Use | Privacy Policy | Do Not Sell or Share My Personal Information | Accessibility Statement
ThriftBooks® and the ThriftBooks® logo are registered trademarks of Thrift Books Global, LLC