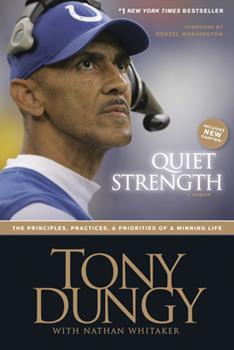 Quiet Strength: The Principles, Practices, & Priorities of a Winning Life

2008 Retailer's Choice Award winner Tony Dungy's words and example have intrigued millions of people, particularly following his victory in Super Bowl XLI, the first for an African American coach. How is it possible for a coach--especially a football coach--to win the respect of his players and lead them to the Super Bowl without the screaming histrionics, the profanities, and the demand that the sport come before anything else? How is it possible...

An Excellent Book that Uplifts the Reader

Published by Thriftbooks.com User , 15 years ago
I received my copy of Quiet Strength from the hands of Coach Dungy himself on the day the book was released in Atlanta, GA. The humble man from Jackson, MI was wearing the Super Bowl ring as he handed me the autographed book. This is an extremely well written book! I was a big fan of Coach Dungy from his Tampa Bay Buc days (I am a Buc and Jaguar fan) and because like him I ended up in Indiana about the same time that he moved up here, I've followed his career up here--but this book unveals so much about the man and how his faith helps him to interpret the events of his life--both the good and the bad. What many people would consider insignificant events, Coach Dungy helps the reader to reevaluate and to see in their correct light. I think anyone who reads this book will come away a better person than they were before they read the book--truly a mark of a great book, but also a mark of the quiet strength that motivate Tony Dungy!

Quiet Strength Means Never Having to Apologize for Being Kind

Published by Thriftbooks.com User , 15 years ago
The head coach of the Indianapolis Colts, Tony Dungy has written an incredibly touching biography. For years Lovie Smith (coach of the Chicago Bears) and Dungy were considered "too soft' to be effective leaders in the NFL. They were also regarded to be two of the finest individuals associated with professional sports: both have genuine character, are humble, give thanks to God instead of themselves, and have a strong sense of family. The players on the Colts feel that kind of closeness to Dungy: a family spirit. Imagine the difficulty of uniting and motivating 44 of the toughest men on the planet into a common goal without resorting to strong-arm tactics that they are used to. Tony's book is a testament to making life a `family moment.' Achievement shouldn't be made at the sacrifice of the achiever's soul. There are many real life lessons in Tony's biography, but this book is much more than that. They detail how to deal with issues with maturity, humility and thoughts of others first. Does it work? Well, he just won the Super Bowl with that philosophy, and believe me, 100's of sportswriters woke up the next day with stale egg on their face. Dungy agonized whether to put the heartbreaking story of his son in the book, but finally relinquished to help others who have to somehow come to terms with family tragedies. I've grown so weary of endless sport exposes' that emphasizes the negative. That is one of the delights I had when reading this book- the absence of sports self-glorification in the Dungy story. This is far from being your average sports tell-all. In August of 2007, this book was number 1 in the country in sales, proving that you don't have to write a gossip book for a novel to be successful about sports. Despite the disrespect by the Tampa Bay Bucs, despite losing his son, despite taking criticism for being too easy on his players and despite being misunderstood by the sports media, Tony Dungy has emerged positively. Lessons in life are not just learned: they are earned. 10 years from now his players will glowingly talk about the influence of Coach on their lives. Until then, when the final vindication comes for his selfless efforts, this book: "Quiet Strength" will serve as a monument to old-school values and the wonderful results they can bring. Jeff Feezle of Macafeez

A Different Kind of Leader

Published by Thriftbooks.com User , 15 years ago
Super Bowl championship coach Tony Dungy writes a tell-all book that the entire family can read. In fact, Dungy would not start his own bio with "super bowl championship coach." Instead, he would begin it with "Christian," then "husband," "parent," and "friend." Even when talking about coaching, Dungy's philosophy is on coaching the entire person--mentoring. "Quiet Strength" is one part autobiography, one part thrilling sports biography, one part coaching technique, one part dealing with suffering, one part family life narrative, one part social commentary, and one part Christian living teaching. Woven together seamlessly, the subtitle accurately provides the beautiful tapestry that results: "The Principles, Practices, and Priorities of a Winning Life." Reviewer: Bob Kellemen is the author of Beyond the Suffering: Embracing the Legacy of African American Soul Care and Spiritual Direction , Soul Physicians, and Spiritual Friends.

Published by Thriftbooks.com User , 15 years ago
This book proved to be much more than I'd expected. I've read the books of many famous personalities (in and out of sports), and I can honestly say that Coach Dungy breaks all the stereotypes. When he's at the top of his game, he gives the glory to God, his family and his team. When he's in the worst places of life, he praises God for His goodness. When he's searching for answers, he chooses to lean on God for direction. He consistently lives a life of integrity, sacrifice and service.....and allows the glory to go to the One who deserves it, not to himself. Wouldn't it be great if all of our professional sports figures conducted themselves in a similar way? Though I've never been a Colts fan, this book and the various interviews I've recetnly seen with Coach Dungy have won me over. I'd HIGHLY suggest this book for your summer reading list.
Trustpilot
Copyright © 2022 Thriftbooks.com Terms of Use | Privacy Policy | Do Not Sell or Share My Personal Information | Accessibility Statement
ThriftBooks® and the ThriftBooks® logo are registered trademarks of Thrift Books Global, LLC