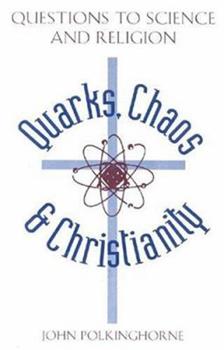 This book discusses the belief in God, Chaos, evolution, miracles, and prayer, and gives an answer to the question Can a scientist believe?

A Superb and Thoughtful Analysis

Published by Thriftbooks.com User , 14 years ago
This is the first work I've read by this author. It is a thoughtful examination of the premise that both science and religion are involved in seeking the truth about the world. The author is a former theoretical physicist turned Anglican priest and theologian. The description of some very abstract science is done clearly enough so that a non-scientist reader can grasp the concepts and understand their extension into the realm of theology. I gather that he has written a number of books that go into many of these ideas in more detail. This book is an overview of those writings. It is a small book but very thought provoking, I need to read it again.

HOW God acts in the world today

Published by Thriftbooks.com User , 15 years ago
I highly recommend this book for Christians who are seeking to better understand HOW God acts in the world today and/or seeking to better understand the effectiveness of our prayers, which of course is related to the first issue. Polkinghorne's answer is summed up in Chapter 5: "Can a Scientist Pray?," which alone is more than worth the price of the book and the time required to read it. His answer, BTW, is yes.

Published by Thriftbooks.com User , 21 years ago
Simplistic and erroneous thinking about "religion" and "science" is rife in our era. John Polkinghorne sets himself the task of accurately describing the relationship between them. He refutes the usual lazy assumption that the two belong to completely unrelated categories, like walruses and carpenters. Polkinghorne is convinced that in fact science and religion (at least Christianity) both require a similiar method of truth-seeking. He believes that the search for truth in science was influenced by the Christian belief in God, and that the logical connection between believing in a Creator and studying the creation still holds. He thinks scientific metaphors shed light on theology, and vice-versa. Thus, not only is there no conflict between being a scientist and a follower of Christ, the two disciplines inform and supplement one another. Polkinghorne's words seem to carry a special gravitus. Part of the reason for this, of course, is that he knows his stuff: he was a first-class scientist, physics prof at Cambridge, before getting into theology. Also, in this book, he writes with the kind of restrained simplicity that is good style for scientists writing for the masses, that strongly suggests great intellectual power, sheathed as it were. But probably what gives his argument greatest force is his honesty. The more I read Polkinghorne, the less believable it seems to me that his argument for Christianity might be given either in ignorance or in defiance of the evidence. He might concede too much at times, and he tends to be cautious, but he does not seem to put more weight on an argument than the evidence can bare. I especially liked what Polkinghorne said about faith and reason. "Many people seem to think that faith involves shutting one's eyes, gritting one's teeth, and believing X impossible things before breakfast . . . Not at all! Faith may involve a leap, but it's a leap into the light, not the dark. THe aim of the religious quest, like that of the scientific quest, is to seek motivated belief about what is the case. . . " While a lot of people (both Christians and skeptics) seem to prefer to define faith as believing something contrary to the evidence, I don't think that is either the Biblical or the historically usual Christian point of view. Polkinghorne's argument on this point stakes out the mainstream of Christian thought, in my opinion. Readers who would like to think through the relationship between faith and reason, and between various faiths, in more detail, might find my book, Jesus and the Religions of Man, worth a read as well.

Can a scientist believe in God?

Published by Thriftbooks.com User , 22 years ago
In this short book, Polkinghorne describes how a scientist can intelligently believe in God by exploring the various ways that science reveals God's interaction with the world. I especially appreciated his exploration into God's interation with the world and the issues surrounding God's knowledge of the world. He carefully explained how science may provide a model (through chaos theory and quantum theory) for the "openness of creation," and God's knowledge of such a creation. This is a great book, written relatively non-technically, for those interested in the related subjects of science and theology.

Great for your soul

Published by Thriftbooks.com User , 24 years ago
This is a great book for soul-nurturing. If you enjoy reading this book, you might also want to read another book, titled: "Get Real: A Philosohical Adventure in virtual Reality." It demonstrate how we humans can re-create the whole universe through virtual reality and teleoperation, and thus become co-creators of a new world.
Trustpilot
Copyright © 2022 Thriftbooks.com Terms of Use | Privacy Policy | Do Not Sell My Personal Information | Cookie Preferences | Accessibility Statement
ThriftBooks® and the ThriftBooks® logo are registered trademarks of Thrift Books Global, LLC