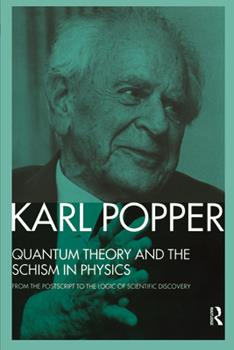 Quantum Theory and the Schism in Physics: From the PostScript to the Logic of Scientific Discovery

Published by Thriftbooks.com User , 13 years ago
This book made me realize that material could be presented as fact and I wouldn't know the difference. it was way over my head because I think you would need a strong backround in science.

A world of propensities and metaphysical dreams

Published by Thriftbooks.com User , 13 years ago
During the early 1950s Popper prepared almost a thousand pages of manuscript for publication as a companion volume to the English translation of his "Logik Der Forschung" (1934). This material started as a series of appendices to "The Logic of Scientific Discovery" but some of them grew into a book to be called "Postscrip to the LSD: After Twenty Years" (from 1934 to 1954). "The Logic of Scientific Discovery" appeared in 1959 but the "Postscript" lagged behind until eventually Bill Bartley took over the editing and it appeared in three volumes in the 1980s (after 50 years). In the meantime photocopies of the galleys circulated among Popper's colleagues and this had some impact, especially by way of Imre Lakatos and his "methodology of scientific research programmes" (MSRP. Unfortunately, this development caused a great deal of confusion and misplaced effort which might have been avoided if Popper's theory of programs had appeared earlier. The three books of the "Postscript" are "Realism and the Aim of Science" (Volume 1), "The Open Universe: An Argument for Indeterminism" (Volume 2) and "Quantum Theory and the Schism in Physics" (Volume 3). They contribute to Popper's long campaign in support of realism, indeterminism and objectivism which in turn support human freedom, creativity and rationality. "Realism" has two parts, the first pursues various forms of inductivism and the second attacks the subjective interpretation of the probability calculus. "The Open Universe" critiques both scientific and metaphysical determinism and traces the linkage between metaphysical determinism and subjective probability theory. This volume carries the defence of realism and objectivism into the heart of quantum theory to challenge the dominant assumptions of the Copenhagen interpretation. Bartley points out in the editor's introduction that this is a profoundly cosmological work, where "the basic theme of Karl Popper's philosophy - that something can come from nothing - obtains its basis in physics". The book contains a 'Metaphysical Epilogue' that is remarkable (in addition to being the basis of Lakatos's theory of scientific research programmes) because it provides a key to understanding a set of themes that unify Popper's whole system of thought (the keystone to his arch of thought it you like). This gives some clues as to the depth of his thinking and the reason why it has been so badly received in the profession at large. Popper's theory of MRPs flows from his theory that we should look at the history of a subject, and its current status, in terms of its problem situations. "In science, problem situations are the result, as a rule, of three factors. One is the discovery of an inconsistency within the ruling theory. A second is the discovery of an inconsistency between theory and experiment - the experimental falsification of the theory. The third, and perhaps the most important one, is the relation between the theory and what may be called the "metaph
Copyright © 2020 Thriftbooks.com Terms of Use | Privacy Policy | Do Not Sell My Personal Information | Accessibility Statement
ThriftBooks® and the ThriftBooks® logo are registered trademarks of Thrift Books Global, LLC