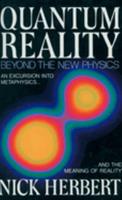 Quantum Reality: Beyond the New Physics

This clearly explained layman's introduction to quantum physics is an accessible excursion into metaphysics and the meaning of reality. Herbert exposes the quantum world and the scientific and philosophical controversy about its interpretation.

Didn't even get to start the book until I realized the writer is a pervert.

Published by okiteru , 14 hours ago
"Modern Physics is fully erect science; Quantum Tantra is physics on all fours." - Nick Herbert

Published by Thriftbooks.com User , 18 years ago
There's something about this book that makes it an instant classic. Though it is not the newest and most "user-friendly" book on quantum physics out there, I recommend this title as a great way to kick-off your knowledge search into this and related subjects. Despite the "mystifying" subtitle, the book is not purely "pseudo-science" and is packed with a lot of detailed and concrete information. From classic experiments such as the "photon slit experiment" and the "russian gravity wave detector," this book bravely plunges into the enticing riddles of the physics world. Struggling with the wave-and-particle-like duality of forces, and listing the different types of possible realities proposed by different theorists, this book serves a great window into the complicated beauty of a world unseen.

Get ready to sacrifice your convictions to physical laws!

Published by Thriftbooks.com User , 20 years ago
"For if quantumstuff is all there is and you don't understand quantumstuff, your ignorance is complete." pg. 40This book delves into the realm of accuracy in certainty and certainty in randomness and beyond! Afraid of math? Don't worry, this book does a superb job of explaining the subject in terms a layman can understand. Is probability an optimists way of expressing uncertainty, or is uncertainty really random, or is random just a term to conceal our ignorance? You'll get the answer. Very weird!It explains very succinctly the two most important waveforms in science, sine waves and spherical harmonics. Thought color was an inate attribute? Wrong! Learn the 5-steps to take to find a attribute of a quon using quantum theory! You'll think you're Steven Hawkings after reading this great book! Now I can say with confidence that DNA is to genetic code what a waveform attribute is to cosmic code! What the hell did I just say? You'll know after reading this book! Become a genius (or at least look like one) in a week! Even if you don't like scienctific "stuff", you'll love this book just for its weirdness! You'll see why possibility squared equals probability! heh heh... You'll also find out if a tree really makes a noise if it falls in a forest when you're not there! :)Wondering about the finer aspects of the photoelectric effect? It's in here. Why does a camera lens look purplish? It's in here too! What is reality? ... :) If you thought Bell's Theorem was weird, you haven't seen nothin' yet! There is nothing as weird as quantum theory. You won't want to believe it, but "quantum theory boldly exposes itself to potential fasification on a thousand diffent fronts. Its record is impressive: quantum theory passes EVERY test we [physicists and philosphers alike] can devise. After over 60 years of play, this theory is still batting a thousand." pg. 94Buy this book and enjoy! That is... if the book is real!

Published by Thriftbooks.com User , 20 years ago
If your aiming to simply understand as much as possible about quantum theory by reading one popular science book, then look no further. This book deals with all important theories and experiments in a clear way, without omitting the more difficult stuff. I have also read "taking the quantum leap" by Fred Alan Wolf but find it incredibly unclear because of its reluctance to show real physics. Talking about quantum physics without getting into too much detail for the coffee table reader makes it fragmented and obscure. Wolf favors vague talks of wonders over the step by step explanation of experiments that lead you to the heart of the problem. Herbert made me understand quantum reality as much as possible by using clear text with clear diagrams, explaining enough physical detail for me to appreciate the wonders of quantum reality. And yes... I'm still wondering. Enjoy!

Quantum - The dreams that stuff is made of.

Published by Thriftbooks.com User , 22 years ago
This book was the easiest of all of the many popularizaitons of quantum theory for me to understand. Nick presents the material clearly, yet without "dumbing down" the physics.He shows how the strangeness of the quantum world is implicit in the ordinary experiments of physicists. (what he calls the "Cinderalla Effect.") The best thing about this book is that the main thrust of the book is speculation on the nature of deep reality, without it being a "New Age" treatment like the "Tao of Physics" and other books. Yes, reality may be affected by consciousness, he says, but only in certain contexts and only for dynamic attributes of particles.The book ends with a discussion with Bell's theorem that reality itself is nonlocal (unmediated, unmitigated, and immediate action-at-a-distance forces acting upon objects.) He explains that this nonlocality exists even if quantum theory eventually turns out to be false.The quantum world is strange and mysterious enough without "New Age" explanations added unto it, as you will discover when you read this book.

Published by Thriftbooks.com User , 22 years ago
This book is, without a doubt, one of the best nontechnical physics books I have read. As a kid in high school, this book was my first introduction to the mysterious world of quantum physics. I was amazed that, despite my technical illiteracy, Herbert gave me both insight into the inner mathematical workings of quantum mechanics, and into the deeply troubling conceptual problems that this radical theory forces upon us. Even today, as a graduate student in theoretical physics, I have a more profound appreciation for quantum mysteries than any of my classmates, simply because I read this book in highschool. I would recommend this book for the layperson and the quantum feild theorist alike!
Trustpilot
Copyright © 2022 Thriftbooks.com Terms of Use | Privacy Policy | Do Not Sell or Share My Personal Information | Accessibility Statement
ThriftBooks® and the ThriftBooks® logo are registered trademarks of Thrift Books Global, LLC