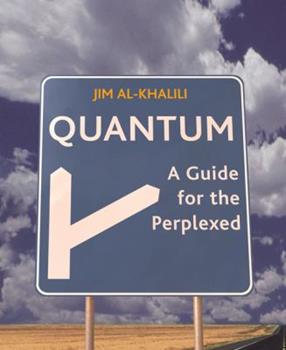 Quantum : A Guide for the Perplexed

In this lively look at quantum science, a physicist takes an entertaining and enlightening journey through the basics of subatomic physics Along the way he examines the paradox of quantum mechanics beautifully mathematical in theory but confoundingly unpredictable in the real world. Marvel at the Dual Slit experiment as a tiny atom passes through 2 separate openings at the same time. Ponder the peculiar communication of quantum particles, which can...

Published by Thriftbooks.com User , 14 years ago
I've read several books on Quantum Mechanics and Physics. This book is the best I've read to date. Very well written, great illustrations, entertaining, and thought provoking. The books gracefully takes you to a higher level of Quantum understanding without blowing you away with PHD level discussions. Great book!!

Published by Thriftbooks.com User , 15 years ago
This book has one of the best presentations of Quantum Mechanics that I've read. It explains three to four questions deep on most all concepts. The author seems to anticpate your next question and then deals with it a few pages later. The historical background leading up to the current theories is excellent without getting bogged down. He cuts to the heart of the priciples and allows you to understand the difference between wave probability and actual quantum behavior at any given instant. He then goes on to practical applications that take advantage of this strange behavior. Now I won't have to go to my grave without a decent understanding of the current state of the theory of matter.

The World As We Can't Imagine It!

Published by Thriftbooks.com User , 17 years ago
Biologists have to a great degree ignored the strange world of quantum physics. As Chet Raymo (actually an Astronomer) observes it is difficult to see how quantum effects could really touch the scale at which we function. Raymo in fact believes that such effects may cancel each other out at our scale. I think, however, that this may be a narrow, if comfortable, view. Roger Penrose has proposed that consciousness itself may be a quantum effect and Johnjoe McFadden believes that quantum effects may very well have bearing on the evolution of life. As a biologist I am struck with the inability of scientists to actually define life, other than by the reductionist view that it is a series of chemical processes. There are in fact many chemical processes that are not life and so this does not quite satisfy.However, this is not to get into heavy metaphysics or to take on some mystical view of life. It is, however, to acknowledge the basic weirdness of life that fits, it seems to me, into the weirdness of the quantum universe. I suspect that future scientists will discover that life has more to it than fits the conventional view. But then our view of the universe, including life, has always changed with new insights and I doubt that we have (or will ever) reach full understanding of it all. Jim Al Khalili has caught the excitement of the old and new developments in quantum theory in "Quantum: A Guide for the Perplexed." Once you get past the somewhat glitzy format, you find a solid and fascinating description of the extremely weird quantum world in which matter acts like waves and waves act like matter and in which mere observation can and does change results. The extreme weirdness of Bell's theorem and entrainment soon make the reader realize almost against their will that we live not in the neat ordered universe envisioned by Newton or even Einstein, but in the much stranger world of entrainment and "chance" events. To top it all off we discover that the brain may be a "quantum computer" that functions in ways quite different from the desk top computers that we use every day.If you thought the universe made perfect sense read this book and be disillusioned!

Published by Thriftbooks.com User , 18 years ago
This book is beautiful in all aspects. It is very well written, interesting and has great illustrations. The author takes a very complex and many times seemingly illogical topic and makes it both understandable and interesting. We are also given alternative views and told when the state of the art falls short of understanding. I would like to see a second edition in 10 years covering new advances in the topic. One of the best books I have seen in science in the past few years.

Published by Thriftbooks.com User , 18 years ago
I became interested in quantum theory after reading Brian Greene's "The Elegant Universe" about six months ago; since then I have gone to some lengths to find a book that would explain quantum theory in a way that was non-formal enough for me to understand but not excessively simplified. Until recently, I hadn't found any thing that fit this description -- until, that is, I ran into this book at my local book store. It is BY FAR the best explanation of quantum theory for someone who is relatively (or even completely) unfamiliar with it. The author explains the theory in a step by step fashion, not leaving anything implied or unsaid, but in no way is insulting to one's intelligence. As a philosophy grad student, I especially appreciated the chapter on the various interpretations of quantum theory, including the 'many-worlds' interpretation that reminded me very much of David Lewis's metaphysical system (in which all possible worlds actually exist somewhere). I bought this book at 10:30 p.m. and had read half of it by the time I went to bed, and finished the rest of it the next day. It is that good! Highly, highly recommended.
Copyright © 2020 Thriftbooks.com Terms of Use | Privacy Policy | Do Not Sell My Personal Information | Accessibility Statement
ThriftBooks® and the ThriftBooks® logo are registered trademarks of Thrift Books Global, LLC