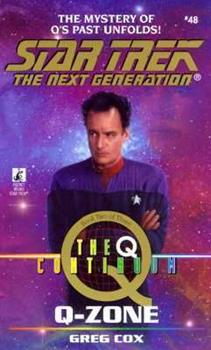 This description may be from another edition of this product. The puckish super-being called Q has bedeviled Captain Jean-Luc Picard and the crew of the Starship Enterprise since their first encounter at Farpoint Station. But little was known of Q's enigmatic...

A great contiuation of the first book

Published by Thriftbooks.com User , 21 years ago
For those of you who like Q, space battles, and mystery, you'll like this book. Read the first one too!

Published by Thriftbooks.com User , 21 years ago
This entire trilogy is a gold mine for those of us who are fascinated by Q. Unfortunately, it is probably not going to appeal to those who find Q annoying, or those looking for a classic Picard-centered adventure (even though he appears on the cover).In this book, Q, having kidnapped Picard right off the bridge of the Enterprise-E, begins sharing parts of his past with Picard in typical Q fashion... by transporting them both back in time to witness the events first-hand. As he does this, he shows us a completely different being, in attitude at least, than the smug, self-assured Q we are used to seeing on the TV series. We also see that Q was at least indirectly behind several of the adventures of Kirk and his Enterprise.

Published by Thriftbooks.com User , 23 years ago
For absolutely anyone who was intrigued with Q and the Q Continuum when they first appeared in Encounter at Farpoint. Although a bit lacking in developing the secondary plot of the Enterprise's troubles, the novel more than made up for it in its developement of Q. Greg Cox truly brings Q to a new light, and shows us a side of the super-being we have never seen. Watching Q struggle through witnessing his own past is an emotional experience at the least. A great read. The only problem is, can the final installment live up to the expectations formed by reading the first two?

Published by Thriftbooks.com User , 23 years ago
Greg Cox again proves his skills at writing an original story that avoids the stale plots and repetitiveness of most recent Star Trek books. Cox manages to weave in details of Q's life that seem plausable given Q's history. The characters are solid and the action is gripping--especially the scenes revolving around the Tkon empire.
Copyright © 2020 Thriftbooks.com Terms of Use | Privacy Policy | Do Not Sell My Personal Information | Accessibility Statement
ThriftBooks® and the ThriftBooks® logo are registered trademarks of Thrift Books Global, LLC