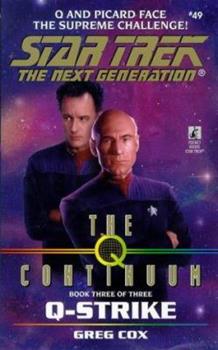 The third in the Q Continuum trilogy, a sequel to Q-Space and Q-Zone. The Q Continuum is an extradimensional domain in which Q, and others of his kind, exist in immortality.

Published by Thriftbooks.com User , 19 years ago
Star Trek: The Next Generation - The Continuum: Q-Strike written by Grex Cox is the concluding part of the trilogy called the Continuum. As Riker heads for the "safty" of the outer fringes of the galactic barrier to escape the Calamarain, as the Enterprise is in grave circumstances, with psychokinetic energy of the barrier battling the Enterprise crew, as the shields are modified to absorb this energy; and the Q going to war with O and Jean-Luc Picard is still along for the transcendental ride through the galaxy with Q.This book does grab you and it does keep you interested as to how will this Q-ish nightmare of cosmic war will end, as Jean-Luc Picard completes this strangest of all experiences through demensions... will the galaxy be doomed. As ancient conflicts resume between powerful enemies... Picard is now in the middle and the consequences are existence itself.This book wraps-up some of the loose ends that Q has created and has a rather Picard solution to it. As this third installment of the trilogy was the best of the lot, you will find that the narrative to be the best, also. All in all, with the surpreme challenge at hand, who better to trust the galaxy's fate... none other than Captain Jean-Luc Picard.

This is what a Q book should be!

Published by Thriftbooks.com User , 20 years ago
After starting well in book one, and then slowly down to a crawl in book two,book three lets loose with some of the best story telling in the book series! Q faces an enemy more powerful than himself (a storyline touched on in Peter David's incredible "Q-Squared"), but this time he is trapped aboard the Enterprise and must play a sadistic game of "Hide and Seek" against his enemy, O. The storyline involving the female Q and baby q was equally gripping, as they faced the Betazoid professor now enhanced by the Galactic Barrier (as happened to Gary Mitchell in the original series episode "Where No Man Has Gone Before"). The story races along incredibly well, and makes up for the horrible sluggishness of the second book in the series. Definitely not one to miss!

Best of the trilogy

Published by Thriftbooks.com User , 21 years ago
In this conclusion of this incredible trilogy ends with anoutstanding climax. After the destruction of the Tkon Empire, leadsthe first Q Continuum war, which Q is torn to whose side to be on. In the past of this book, we see the other Q also from the episode, "Deja Q", the female Q, Quinn from the second season episode of Voyager, "Death wish", and a Q who looks remarkably like Picard....

So good it's anoying!

Published by Thriftbooks.com User , 22 years ago
Aparently Cox decided he had explain every undefined mystery in the star trek universe! From the dinos, to the barier on the inner and outer part of the galaxy, to why Q hangs around with humans, and even people from TOS! That's the only thing I can complain about, his obvious need to stop watching Star Trek for a few days. The book was good, but the cover was better! How come we can't review the cover?

Published by Thriftbooks.com User , 22 years ago
Well, these three books are the first that I've read from any of the Star Trek novels. I think they were great! I finished all three books in two days, and I want more. A lot of you seem to claim that this trilogy was not good, and that an author named Peter David is much better. I don't see how that's possible because this series was so good. A lot of the reviewers claim that it was too drawn out with details and Star Trek tv show references, and I just say, "so what?" If you don't like the references, just skip over them, although I don't see how it's so hard to read a couple more pages. A great trilogy!
Copyright © 2020 Thriftbooks.com Terms of Use | Privacy Policy | Do Not Sell My Personal Information | Accessibility Statement
ThriftBooks® and the ThriftBooks® logo are registered trademarks of Thrift Books Global, LLC