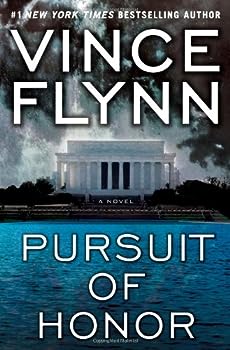 Mitch Rapp--the "mainstay of the modern techno-thriller" ( New York Journal of Books )--returns in this exhilarating political thriller as he fights for the sake of his country and the pursuit of... This description may be from another edition of this product.

Published by Thriftbooks.com User , 12 years ago
Vince Flynn writes the best, suspenseful books that I've ever read! This one does not disappoint. His stories are so very real that they make you wonder how much of the story is pulled from actual events that we know nothing about? They are very believeable. Once you pick this novel up and get started, it's really hard to put it down. I can't wait for the next one!

Could not put down.

Published by Thriftbooks.com User , 12 years ago
I bought this as a gift for my husband and he could not put it down. He loves all the Vince Flynn novels and this is no exception.

Published by Thriftbooks.com User , 12 years ago
Mitch Rapp has been spending a lot of time in Washington lately, and the alarming thing is that Rapp and Irene Kennedy, head of the CIA are fighting the exact same battles we read about in the newspapers and hear about on television every day. Congress and the American people who were so supportive of their efforts after 9/11 have now become moralists and are more worried about protecting the rights of foreign detainees than supporting Rapp, Kennedy and those sworn to give their lives to protect us. This is a major thrust of "Pursuit of Honor," but it is also the major thrust of what is going on in Washington and politics today. Most of what the American people hear today would condemn what Rapp, Kennedy and the Vince Flynn's CIA call "extreme measures." To support or condone "extreme measures" today (October,2009) would be considered to be un-American. Vince Flynn and Mitch Rapp at least give us the other side of the debate--and what could happen if the United States' loses its focus on the War on Terror. Sometime truth is stranger (and more tragic) than fiction. Let's hope this is not one of those times. Let this be said for Mitch Rapp--he is an over-achieving, under- appreciated American, counterterrorism at its best. And Vince Flynn? He's the best, simply the best. And this is another great read from Flynn. His magic continues. Be prepared to the read the last 75-80 pages at one sitting. And if you have a weak heart, have your medicine near by. This is a thriller. You would expect nothing less from Vince Flynn and Mitch Rapp.

Published by Thriftbooks.com User , 12 years ago
As a huge Vince Flynn fan, I ran out and purchased this the minute the bookstore opened this morning and then sat and read it for most of the day. I think this is his best book in the last five years or so. If you read Vince Flynn, then you know you can depend on him to tell it like it is with regards to Washington politics and terrorism through his political thrillers and in particular his hero Mitch Rapp. This book is off and running from the first sentence and doesn't stop until the end. The book continues where Flynn's Extreme Measures: A Thriller (Mitch Rapp Novels) left off and opens after 185 people are killed in Washington DC; many at the National Counterterrorism Center and they include senators, staff, and cabinet. Mitch Rapp has rounded up the terrorists, but three escape and the chase is on. While Rapp is trying to find the escaped terrorists before they kill again, he is being investigated over his interrogation methods in Extreme Measures. Rapp also has to contend with Glen Adams, Inspector General of the CIA who wants to bring Rapp down via a Deep Throat scheme. Mitch Rapp is both a simple and yet a complicated hero. He is single minded in his pursuit of America's safety. He is a pragmatic operative in terms of how he looks at terrorism and has little time for the games politicians play. Vince Flynn has developed a strong hero with many layers that when delicately pulled back reveal a complicated man on a mission to counteract terrorism; sanctioned or not. He'll do what is necessary to keep America safe. I hate to get too specific since this is a thriller and it is easy to give spoilers that will ruin the read for folks, but this book rocks! Flynn has really managed to revitalize the series with this offering!

Published by Thriftbooks.com User , 12 years ago
Before someone accuses me of being a Mitch Rapp junkie, and say I could not have possibly read the book yet, I am going to admit the addiction myself - yes, I am and no I have not. I am half way into the story since this morning. One correction though - I am not just Mitch's character junkie, I am more of a Vince's narrative style addict. Term Limits got me hooked worse than any existing drug known to a Medic (or a Corpsman, if you play the Navy). Pursuit of Honor does not disappoint, even if you flip the book upside down and try to read it that way... I have not found any implausible twists yet and I doubt it there are any, if you know something about anything.. My favorites were Term Limits and Consent to Kill but the list warrants the revision now. I'll skip the plot introduction, there are a few editorials out there. Any of you guys and gals who are into Mr.Flynn's or Mr.Thor's stories are in for a treat with this book. That about sums it up.. And Mr.Flynn, I have only one request for you, sir, would you consider allowing your fans to make a clone of yourself so that prolific Vince 1 and Vince 2 pop out at least three or more books a year?
Copyright © 2022 Thriftbooks.com Terms of Use | Privacy Policy | Do Not Sell My Personal Information | Accessibility Statement
ThriftBooks® and the ThriftBooks® logo are registered trademarks of Thrift Books Global, LLC