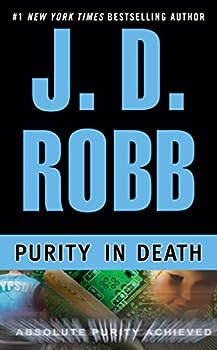 Lieutenant Eve Dallas must take down a group of terrorists who use a computer virus to kill in this thriller in the #1 New York Times bestselling In Death series. Louie Cogburn had spent three days... This description may be from another edition of this product.

JD Robb is a wonderful read

Published by Thriftbooks.com User , 13 years ago
I think I have all the "In Death" books and have even re-read them and enjoy them everytime.

Published by Thriftbooks.com User , 14 years ago
Nora Roberts/J. D. Robb is excellent. I don't think I've found a book of hers that I didn't like.

Published by Thriftbooks.com User , 20 years ago
The last few books have been good but not great. With her latest installment, Purity in Death, JD Robb aka Nora Roberts hits a home run. It's got the whole package. If you were wondering whether or not you wanted to pick up the latest installment in this series, hesitate no more. This one is a keeper.

The Mother of All Computer Viruses

Published by Thriftbooks.com User , 20 years ago
A computer virus from hell is infecting more than machines in New York City circa 2059. Launched by a self-righteous terrorist organization (aren't they all?), this baby seeps into the brains of its victims, causing paranoia, extreme violence, unbearable pain, and unspeakable death. The victims are not stellar human beings--most are drug dealers and/or child molesters--but in the throes of the virus, each has murdered an innocent victim, including a cop. Besides, thinks Eve Dallas, who is primary on the case, vigilante justice is never warranted.The story of the terrorist organization, Absolute Purity, and Eve's desperate fight to bring it down, is one of the best JD Robb/Nora Roberts has written in this series. It's fast, it's furious, it's interesting, and not entirely predictable. The deep introspection that has so plagued the last few books in the series is gone, as is the endless back-and-forth battle Eve wages to accept that she is loved. MacNab and Peabody are back, and their relationship has, just in the nick of time (for the reader, anyway), deepened. Roarke is his usual inhumanly gorgeous and brilliant self, Feeney is aboard with his omnipresent bag of candied almonds, and Eve's "rad" friend Mavis has a surprise that far surpasses her purple hair. All in all, this is one fun read. Unlike the last few in the series, it left me wanting more, and I'm looking forward to the next In-Death release.

Published by Thriftbooks.com User , 20 years ago
Lt. Eve Dallas is back in another action packed who dun it. Citizens of New York are under assault from a group who calls themselves The Purity Seekers. Granted the only ones targeted are the bad guys; drug dealers, pedophiles, and flesh procurers. The method of assault is a computer virus that can be transmitted through the computer into the human brain. Eve, along with the yummy Roarke and a few other recurring cast members, sets out to solve the crime before any innocent bystanders get caught in the crossfire. As if that weren?t enough on Eve?s plate, she gets lessons in the much dreaded game of politics and public relations.With Ms. Robb?s usual flair, she presents a story full of ...-kicking action and a pretty nifty plot line. Dialogue is at times witty and others heart wrenching. We see the return of several delightful characters that have been missing for the past few books. Namely Jamie, Baxter, Webster, Trueheart, and Mavis (who makes a brief but important appearance). Purity in Death ranks fairly low on the gore scale ? its no worse than any other thriller or mystery. Foul language is medium on the sailor scale ? about like NYPD Blue. ?Adult Content and Nudity/Sex Scenes? - well, it is pretty steamy and if this offends you just skip the pages. They don?t happen that often. J As far as how this book ranks along with the rest of the series? It?s okay. There have been others in the series with more excitement. I would think of this one as a ?secondary? character book; meaning that Ms. Robb seems to be focusing more on the development of secondary characters than with Eve and Roarke. It was a very enjoyable read.
Trustpilot
Copyright © 2022 Thriftbooks.com Terms of Use | Privacy Policy | Do Not Sell or Share My Personal Information | Accessibility Statement
ThriftBooks® and the ThriftBooks® logo are registered trademarks of Thrift Books Global, LLC