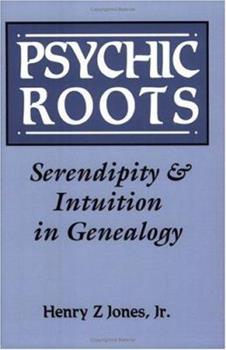 Psychic Roots is all about the influence of coincidence and serendipity on genealogical research, the chance combination of events over which the researcher has no control but which nevertheless... This description may be from another edition of this product.

Published by Thriftbooks.com User , 14 years ago
Has an ancestor ever just 'fallen' into your lap? Have you ever found what you were not looking for? Have you ever pulled the `wrong' book off the shelf and found an answer in it? Have you chased ancestors until they found you? If you can answer 'yes' to any of these questions as they pertain to genealogy - and even if you can't - you can certainly appreciate unexpected surprises. I would venture to say that most of us have experienced things like this even in non-genealogical situations. Hank Jones's "Psychic Roots: Serendipity and Intuition in Genealogy" and his follow-up book, "More Psychic Roots: Further Adventures in Serendipity and Intuition in Genealogy" demonstrate the reasons for his venture into the `less scientific' methods of finding ancestors. He begins with the premise that our ancestors want to be found. For him, it all started when he was a young boy peeking into a forbidden trunk in an attic. In writing this book, he is, as far as I know, the first professional genealogist to mention out loud and in print, the possibility that our ancestors want us to find them and will use various ways to get us to do that which are not always based solely on solid, scholarly research methods. As a genealogy librarian, I've heard stories like those in Hank's books many times. Hank says initially he was concerned about taking some flack for his theory, which some professionals would criticize as undermining years of attempts to make genealogy a more solid, respectable field of research, based on sound reasoning, solid research methods, and hard evidence. His call for examples of `psychic roots' experiences brought stories even from some of the most respected names in the field. He was surprised that even the genealogical scholars had moments like this that they were willing to share, that they also wondered if something unexplainable was at work all along but were reluctant to share it. Hank's books provided a `safe place' to share stories of strange coincidence and serendipity. He had so many responses to his invitation to genealogists to share their own stories that he wrote the second book. I think Hank's theory has been more than validated. I suspect that any qualms he may have had about being taken seriously diminished as the stories rolled in. Hank does not for a moment lessen the importance of sound, solid research methods. He himself is a distinguished Fellow of the American Society of Genealogists. But neither does he discount or dismiss the less-scholarly methods that bring us many of the answers we seek. He's seen, heard, and read far too many examples to brush them off simply as stories of just dumb luck, although even dumb luck can sometimes be a factor in a fortuitous find. Another concept Hank discusses in conjunction with serendipity and intuition is psychologist Carl Jung's theory of synchronicity, which is the occurrence of two seemingly unrelated events that come together in a meaningful way that cannot be explained to

Not "hard-core" genealogy but fun and interesting

Published by Thriftbooks.com User , 14 years ago
Hank Jones spent twenty years in movies, especially Disney films, and that freed him up later on to pursue his genealogical interests, both as an author and as a well-known national conference speaker, for both of which he received the NGS Award of Merit. He's best known as the expert on the Palatine German immigrants, but also for this volume about the influence of coincidence, intuition, and serendipity in family research -- and we've all experienced it: The nagging feeling that you really need to venture up into a strange courthouse attic, no matter how dark it is; the discovery that the person sitting next to you on your flight to Salt Lake is your fourth cousin; the search through a cemetery for a particular grave that unexpectedly turns up a branch of the family you had no idea was there. (All three of those examples have occurred in my own immediate family, by the way.) The author relates his own brushes with the preternatural and brings together the similar experiences of several dozen other researchers, including such well known figures as Carl Boyer, William Filby, Charles Hansen, Helen Leary, Joan Kirchman Mitchell, Marsha Hoffman Rising, Christine Rose, Eugene Stratton, Neil Thompson -- and Winston De Ville.

Waking up to invisible around us

Published by Thriftbooks.com User , 21 years ago
I had always avoided the subject of genealogy as being completely boring. It conjured up visions of people sitting in libraries for hours and hours going over ancient records trying to find names of their long-dead ancestors. What a weary way to waste one's days! However, a friend recently put into my hand Henry Z. Jones' PSYCHIC ROOTS, Serendipity & Intuition in Genealogy. It has totally changed my views. I was amazed to find success in genealogy often comes from intuition, searching not with just the mind, but also an open heart, enjoying warm feelings with the desceased. Again and again in his book, Jones describes how helpful hints, items seemingly droppped from nowhere, somehow unite the living with the thoughts and deeds of the departed. As the author concludes:"I do believe that our ancestors have no wish to be forgotten: they want to be found." And I would add, our ancestors have been over and about us since we were born, seeking to lead us into ever greater dimensions. Genealogy can open the doors to deeper understanding of our larger family "in the beyond," but still close in influence and love. Don't miss this book. It will open your heart to ancestors who are as close as breathing.
Trustpilot
Copyright © 2022 Thriftbooks.com Terms of Use | Privacy Policy | Do Not Sell My Personal Information | Accessibility Statement
ThriftBooks® and the ThriftBooks® logo are registered trademarks of Thrift Books Global, LLC