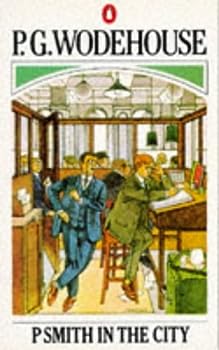 Psmith in the City

(Book #2 in the Psmith Series)

Psmith in the Cityfinds the inimitable Psmith working at a bank and determined not to let honest toil depress him. This description may be from another edition of this product.

Published by Thriftbooks.com User , 19 years ago
"Psmith in the City" marks something of a transition piece for Wodehouse. Here, two of his principle "School" characters are taken away from the school environment and put into the real world. Psmith is elevated to the principle character quite clearly - a trend which continues in "Psmith, journalist", and of course is entirely dominant in the concluding "Leave it to Psmith", where Mike is relegated to the background. There is also an element of the autobiographical in this work, for Wodehouse spent his post school days in much the same position as Mike finds himself - working in a city job for which he had little aptitude and did not like. Dulwich College, Wodehouse's school, also makes a cameo appearance. The character of Psmith (based on a real person, unusually for Wodehouse) lends himself well to Wodehouse's skill at dialogue. Psmith's unique character traits are generally revealed in his conversation, and Wodehouse makes the most of this - certainly more than he was able to in the earlier school settings for Mike and Psmith. The dialogue does not, perhaps, soar to the heights it achieves in "Leave it to Psmith", but this is a distinctly earlier piece of writing. Indeed, the reader is occasionally brought up with a jolt to just how early in the twentieth century this is, with some of the settings and phrasings.Overall this is a very enjoyable book, and interesting because of the transition role it plays in shifting from the more serious "School" series to the more frivolous work for which Wodehouse is more remembered. The autobiographical aspect is also of interest, and though the historical reminders may shock a little, they are a reminder of how long Wodehouse was writing.

Published by Thriftbooks.com User , 21 years ago
There's little I can say about this book other than if you love lighthearted comedy and 'comedy of errors', read this book. There's not a single book by Wodehouse that I haven't enjoyed to some extent, but the Psmith books are among my top favorites. Psmith's urbane charm and sly wit, combined with the typical miscommunication of a Wodehouse novel are perfect.

Hilarious reading from cover to cover.

Published by Thriftbooks.com User , 22 years ago
I read this book a dozen times and it still makes me laugh out loud. In the ten years since I have read it, I have given it away as a gift, and lent it out to scores of people, all of whom have enjoyed and went on to read other works by Wodehouse. What makes it so enjoyable? Perhaps the autobiographical nature of it (wodehouse worked in a bank and hated it) that adds an authenticity, and is just as fresh as when it was written over 80 years ago. But mainly, it is the character Psmith, one of the most delightfully eccentric characters in literature; based on an aquaintance his cousin knew at a public school, who was "impeccably dressed in savile row suits", called his fellow students comrade and had a "fatherly" way of talking to his headmasters. Also highly rec. is "leave it to Psmith"
Trustpilot
Copyright © 2022 Thriftbooks.com Terms of Use | Privacy Policy | Do Not Sell My Personal Information | Cookie Preferences | Accessibility Statement
ThriftBooks® and the ThriftBooks® logo are registered trademarks of Thrift Books Global, LLC