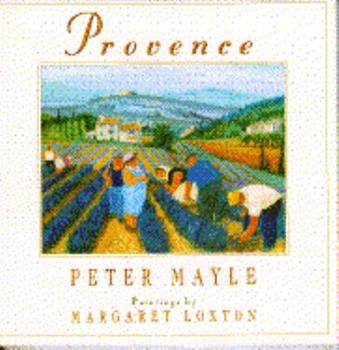 (Part of the Provence Series)

The author of the bestselling A Year in Provence and Toujours Provence has joined forces with one of England's most admired painters to create a vibrant and evocative book that brings to life the exquisite countryside of southern France. 30 full-color illus.

The Fantasy and Reality of Provence

Published by Thriftbooks.com User , 14 years ago
Peter Mayle's "Provence A-Z" is a collection of personal interests and discoveries. There are amusing stories of construction complexities, the celebration of truffles and humorous stories of wild pigs eating perfectly ripe melons. Peter invites you into his world and as he explains the reality of Provence he keeps the fantasy of the perfect vacation alive and well. Since I recently made my own tapenade it was interesting to see a new recipe. There is also an explanation of why tomatoes are known as pommes d'amour. There are stories of unique fruits and visions of hills that are home to two thousand types of butterfly. I loved the story of the new puppy and you can't help but smile when you think of all the adventures Peter has on a daily basis. Overall, this collection of writing makes winter days seem a bit warmer and it is perfect as a cozy read by the fire. ~The Rebecca Review Once I spent a weekend in Provence

Published by Thriftbooks.com User , 15 years ago
This is a collection of short essays about the culture of Provence in alphabetical order. I think it is typical Mayle, intelligent, bright, and whimsical without being "cute". It's a writing you can sample in at odd times.

A 'Dictionary' Full of Love

Published by Thriftbooks.com User , 16 years ago
Here's a book of a couple of hundred entries, from A to Z of course, about life in the Provence region of France. Each entry then has from a short paragraph to a few pages of description. The author is Peter Mayle who has almost made a careet of writing about Provence. He's a Brit who moved there many years ago. He was going there to write a novel, but instead wrote a book on Provence which to the surprise of many turned into a best seller. This started a trend with 'A Year in Provence' and 'Toujours Provence' being the best known. Like expats everywhere who have permanently moved from their homeland, Mr. Mayle is in love with his new chosen country. It shows through his selection of words to include in the book and in the dedication with which he has given these words their Provence meaning. It's almost enough to make people who don't like France ready to go visit.

Everything the guide books leave out -- plus: great charm

Published by Thriftbooks.com User , 16 years ago
t was at a show of paintings by Cezanne and Pissarro at the Museum of Modern Art that I realized I wanted to spend my declining years in the South of France. Specifically, in Provence. My bedroom was the key image: a big bed, whitewashed walls, a shuttered window. And this, most of all --- a view of rolling fields of lavender. This was not a fantasy of a late-life invalid. Of course I'd write. Probably about Provence. And then I remembered: Peter Mayle has already been there, done that. Indeed, he owns the franchise on Provence. I would be annoyed by Mayle's dominance, but the thing is, I know him ever so slightly and he just might be the most pleasant guy on the planet. Opens the good wine for guests. Laughs at your jokes, etc. And is so not a greasy careerist, eager to sell out a beautiful patch of France for a bag of Euros. Listen to Mayle tell the story of his success: I was doing some work for GQ magazine and I had a little bit put aside. We sold our house in England. But I had an idea for a novel that I had sold to a publisher in England. I was going to go out to Provence, lock myself away and whack out this novel and financial things would be more comfortable. I got there and was so distracted by what was going on that I didn't do anything on the novel. My literary agent kept ringing me up and asking to see pages and I eventually sent him some pages on why I couldn't start the novel. He took them to the publisher and said this actually is a much better idea than the novel and the publisher agree. "If he can do another 250 pages like this we've got something." They gave me a "modest advance" -- so modest in fact that it was self-effacing. We had a two-man publication party -- me and the publisher -- and he printed 3,000 copies and said, "There'll be a few left over but I'll give them to you at a discount so you've got them for Christmas gifts." About six weeks later, I was back in France and he called and said. "We sold them all. We're reprinting another 1,500 copies." Gradually it snowballed and then the paperback came out and sold a million copies in England... And then Knopf picked "A Year in Provence" up for the American market, and you know the rest. In "Provence A-Z," Mayle shares the offbeat information he has gathered while living in Provence for almost two decades. Very little of it is the stuff you find in guidebooks. Much of it is information gathered in cafes, where Mayle is fond of pastis (at 45% alcohol, the most intoxicating drink in the house). All of it makes you want to fly to Paris --- tonight, if possible --- and then take the TGV down to Aix. (Cautionary note: There are 16 million visitors to Provence each year. Try not to go in August.) Here's a sample of Mayle's gleanings: -- the origin of a bamboo forest near Nimes -- the charms of Beaumes-de-Venice, which is so much more than a dessert wine -- the genius of the bouffadou in lighting fires -- the Provencal sun tan (Picasso, Mayle notes, was "the color of

Published by Thriftbooks.com User , 17 years ago
Provence, that sunny, charming unforgettably beautiful region of southeastern France has become a longed for Valhalla to many Americans, thanks to Peter Mayle's best selling A Year In Provence and Toujours Provence. Now, Mayle teams with English painter Margaret Loxton to offer 30 delightful scenes of Provencal life. Loxton's figures, which, to me, are reminiscent of Botero, are robust pillars of village life engaged in everyday tasks - tending the vines at the hem of dusky mountains, intense during a game of boules or observing the street scene from a sidewalk café. Her sun-washed colors are as tantalizing as the aroma from a field of lavender. Mayle's refined on-target text adds the perfect touch of explanation to each painting. "Provence" is a small treasure for those who want to remember and those who want to dream. - Gail Cooke
Trustpilot
Copyright © 2022 Thriftbooks.com Terms of Use | Privacy Policy | Do Not Sell or Share My Personal Information | Accessibility Statement
ThriftBooks® and the ThriftBooks® logo are registered trademarks of Thrift Books Global, LLC