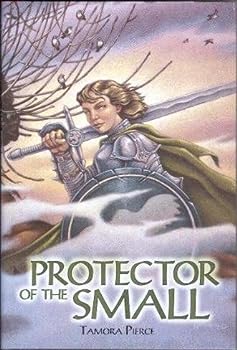 (Part of the Tortall Series and Protector of the Small Series)

Minimal shelfwear. No markings. Pages are clean and bright. Binding is tight. This description may be from another edition of this product.

Published by Thriftbooks.com User , 13 years ago
Tamora Pierce's YA novels are all spectacular, the Protector of the Small quartet included. I was quite happy to get back to Tortall. The omnibus edition takes up less space on the shelf than individual books would, so that's a plus, and the hardcover will hold up better than paperback, as I re-read these books regularly.

Published by Thriftbooks.com User , 13 years ago
While many of Pierce's novels have main characters who have special abilities, Kel is one of the few that serve as rolemodels a girl could achieve since no special power is needed. Great story. Good to see a continuation of the existing characters from previous books.

Published by Thriftbooks.com User , 16 years ago
This is a wonderful fantasy series, with this particular group of books focusing on Keladry of Mindelen, who aspires to be a knight of Tortall. This shouldn't be a problem since it has been ten years since the kingdom proclaimed that girls could enter knight training, however, Kel is the first girl to actually do so. Each book takes us through a year of Kel's training, from probationary page up through knighthood. During the first book, Kel has to contend with the hostility of the other trainees and the instructors who object to her simply because she is a girl. Kel has to be as good as, or better than her classmates to prove that she is entitled to the training. However, Kel gradually wins respect from the other students, and from the trainers. She also has a mysterious benefactor who sends her expensive gifts that assist her in her training, and she discovers in herself a gift for communicating with small creatures. Kel also gains admiration and respect for her courage and for her protection of those who cannot protect themselves. Her strength of character and her willingness to not give up on those under her protection make her an admirable character, and a good role model for young adults. This series of books is admirable in producing a series of strong female role models for girls to read about and emulate. Keladry of Mindelen is another good, strong character, and this group of books in the series is a "can't put it down" type of read.

Published by Thriftbooks.com User , 17 years ago
I am reading this series for the third time right now. They are great! I love them. Tamora Pierce books are so great!! She is my favorite author!! In this book: It has been 10 years since it was allowed for girls to become knights, and the first KNOWN girl page in over a century is Keladry of Mindelan, the Protector of the Small. Kel used to live in the Yamani Isles, and learned some forms of fighting there. Her mother and father helped secure an alliance between the Yamani Isles and Tortall. Kel is the 4th child in her family to become a Tortallan knight (her three older brothers have already been knighted.). Kel finds out that it takes a lot to prove that she is as good, or better than the boys when they refuse to except her. 4 thrilling tales of the hard life of a probationary page, a page, a squire, and a young knight. For more thrilling tales of Tortall women heroes read the other Tortall boooks by Tamora Pierce (They are in this order): 1. The Song of the Lioness Quartet (Alanna: the First Adventure, In the Hand of the Goddess, The Woman who Rides like a Man, & Lioness Rampant.)-About Alanna of Trebond, the first woman knight in a century. 2. The Immortals series (Wild Magic, Wolf Speaker, Emporer Mage, & In the realms of the Gods)-About Veralidaine Sarrasri (Daine), the wild mage 3. Protector of the Small (First Test, Page, Squire, & Lady Knight)-about Keladry of Mindelan (Kel), the first KNOWN woman knight in over a century 4. Daughter of the Lioness (Trickster's Choice & Trickster's Queen)-about Alianne of Pirate's Swoop (Ali), a spy who is the daughter of Alanna
Trustpilot
Copyright © 2022 Thriftbooks.com Terms of Use | Privacy Policy | Do Not Sell My Personal Information | Cookie Preferences | Accessibility Statement
ThriftBooks® and the ThriftBooks® logo are registered trademarks of Thrift Books Global, LLC