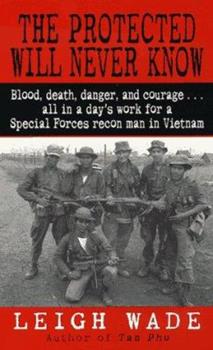 A five-year veteran of Special Forces combat provides unique insights into the combat, courage, and carnage he witnessed during his tours in Vietnam and Cambodia. Original.

The Protected Will Never Know

Published by Thriftbooks.com User , 19 years ago
Reading a book by Leigh Wade is like listening to the man speak; it is a good writing style. Those who were not over there will feel like they were after reading this, or any other book, by Mr. Wade.

FROM THE WHORE HOUSES TO THE KILLING FIELDS.

Published by Thriftbooks.com User , 22 years ago
Whore houses,booze and killing fields. This book gives good insite to the failure of this war. The negative attitude reflected towards other arm forces (other than the Special Forces) shows are own internal conflicts. "Well Written."

Published by Thriftbooks.com User , 23 years ago
Leigh Wade was at the RECONDO School in 1966-67 at the same time I was. Later we served in the 46th Special Forces Company in Thailand. Leigh is for real--he lived what he writes about and it really shows. Buy this book! LTC Jeff Berry (ex-SSG Berry of 66-68).
Copyright © 2020 Thriftbooks.com Terms of Use | Privacy Policy | Do Not Sell My Personal Information | Accessibility Statement
ThriftBooks® and the ThriftBooks® logo are registered trademarks of Thrift Books Global, LLC