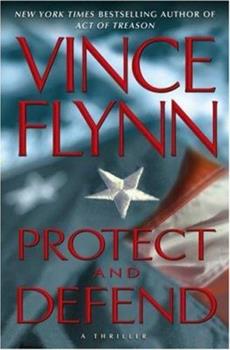 #1 New York Times bestselling author of American Assassin --soon to be a major motion picture Vince Flynn's thrilling bestseller sends counterterrorist agent Mitch Rapp on a collision course with America's most feared enemy. No longer willing to wait for the international community to stop its neighboring enemy, Israel brings down Iran's billion-dollar nuclear program in an ingeniously conceived operation. The attack leaves a radioactive tomb and...

Mitch Rapp is one of the best series written

Published by Thriftbooks.com User , 5 years ago
Love every single one of these books... own and have read all 13 (I think there’s that many) and they are all fantastic

Published by Thriftbooks.com User , 13 years ago
Great book, facts make sense, I like that an educated woman has the power of the CIA and can tough it out when it gets tough. Just enough real culture and politics to keep you hooked. Fun thrill read. Good guy and gal book - not all spy novels can reach both.

Published by Thriftbooks.com User , 14 years ago
You have no basis upon which to trust my opinion, but this is a great series that I could not recommend more highly. If you liked Clancy's "Jack Ryan", you'll love Flynn's "Mitch Rapp" and company. Techno-thriller, action adventure. conspiracy and political intrigue wound with mainspring breaking tension on every page. Rapp is a one man war on terror and bureaucracy: a sophisticated junkyard dog of a man who cuts to the heart of every situation despite obstacles erected by his enemies and nemeses foreign and domestic. Careful, or you might even learn something along the way. The series is best read in chronological order by date of publication. Each adds to the personalities and historical context of those that follow. However, each can be read alone. The settings are contemporary to the real-world events occuring at the time the volume was written, and are somewat in the roman a clee genre. Term Limits (1997), Transfer of Power (1999), The Third Option (2000), Separation of Power (2001), Executive Power (2003), Memorial Day (2004), Consent to Kill (2005), Act of Treason (2006), Protect and Defend (2007), Extreme Measures (2008). Extreme Measures: A ThrillerTransfer of PowerProtect and Defend: A ThrillerThe Third OptionAct of TreasonConsent to Killthe roman a clee genre. However, each can be read alone.

Published by Thriftbooks.com User , 14 years ago
Vince Flynn did not disappoint with this one. I finished the book in 7 hours because I could not put it down. Great story ripped from tomorrow's headlines.

Published by Thriftbooks.com User , 15 years ago
I personally liked this new book much better than Flynn's last novel (Act of Treason). While not the best one of the Flynn series, this book was still an excellent read. I was glad that Mitch Rapp tied up the loose end from the previous book very early in this one. I thought this story took a little while to get going after the aforementioned loose end was tied up. But once I got to the middle of the book, I did not put it down until I finished it. Looking forward to Flynn's next book...

Published by Thriftbooks.com User , 15 years ago
Vince Flynn returns to what he does best in Protect and Defend when he delivers an international pot boiler. Last year's Act of Treason was a departure for Flynn when most of the action and intrigue took place on US soil. Something was missing. I didn't know what it was at the time, but I do now after completing Protect and Defend. After he ties up some loose ends on the domestic front (in delicious fashion, I might add) the focus turns to Iran and their Nuclear program. Without giving too much away, Mitch Rapp is called in to clean up a mess that the US didn't make and in turn attempt to turn lemons into lemonade for our foreign policy. Flynn's bread and butter has always been delving deep into the intricacies Middle East politics and Protect and Defend excels in that department. Not only was the story and action top notch but it was a real education into the workings of the Iranian government. Protect and Defend is an A+ read.
Trustpilot
Copyright © 2022 Thriftbooks.com Terms of Use | Privacy Policy | Do Not Sell My Personal Information | Cookie Preferences | Accessibility Statement
ThriftBooks® and the ThriftBooks® logo are registered trademarks of Thrift Books Global, LLC