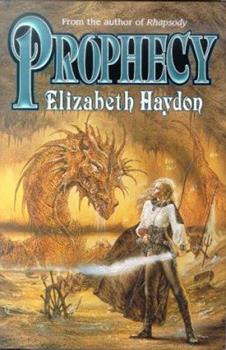 (Book #2 in the Symphony of Ages Series)

In Rhapsody, a fellowship was forged--three companions who, through great adversity, became a force to be reckoned with: Rhapsody, a singer of great talent and even greater beauty; Achmed, an assassin with unearthly talents; and Grunthor, a giant Sergeant-Major whose jolly disposition stands at odds with his deadly skill at weapons. Having fled the F'dor--an ancient, powerful evil--the three emerged on the other side of the world, only to discover...

Published by Thriftbooks.com User , 20 years ago
Elizabeth Haydon is the Jane Austen of the Fantasy world! In a genre populated by stereotypes straight from Dungeons and Dragons she has developed characters that are wonderfully orginal and compelling. In Prophecy we get to know them even better while they establish themselves in their new world. Rhapsody continues to be endearingly naive as she searches for her role in this world and her almost childlike adoration of Ashe, which is sucking her dangerously into the devious political machinations of the Cymrians. Ashe seem to mean well but somehow in spite of his love for Rhapsody, seems to lead her into danger, deception and tragedy. In contrast Achmed, who in most books would be the archetypal villain, always seem to be on hand to help and support her, in spite of his suspicious and cynical nature (not to mention a deliciously dry sense of humour). Between these two opposites stands Grunthor, who gets some of the best lines in the book (and thats saying something!), loyal and protective of them both. Even the minor characters in this book are richly drawn, from the selfish Tristan to the manipulative and amoral Llauron and the unforgettable oracle sisters.In terms of the plot, the story moves forward with increasing pace. We learn more about Achmed and his Dracian heritage, some of Ashe's secrets and Rhapsody comes to terms with her past and her powers. We also learn quite a few of Grunthor's increasingly gory marching songs. Just one thing- Who on earth is the F'dor? Roll on book 3 to find out all and complements to Elizabeth Haydon for resisting the temptation to stretch the story out into a never-ending multi-book saga like so many others. Still, I do hope that she will write may more books in this universe and about these characters - I will read them all!

Published by Thriftbooks.com User , 21 years ago
Prophecy, child of earth is easily the best book I have read this year, just as Rhapsody, child of blood was the best one I read last year. It is vastly superior to the works of the current "masters" of the genre. The battle scenes are sharp and focused, the emotions raw and real, and the characters are the best in fantasy, bar none. Four different people recommended this series to me before I finally bought Rhapsody because I am so sick of what passes for Epic Fantasy these days.The female characters in this book are amazing--whether it's the dragon, the Grandmother, Oelendra or the two women from the previous book. I think Grunthor and Achmed are the best pair of male characters around.I would recommend this book to anyone who has a taste for fantasy, and even those who don't.

Published by Thriftbooks.com User , 21 years ago
Even the curmudgeons seem to have a hard time dismissing this new writer. They fume about the "hype" her first book, Rhapsody, received, try to pick it apart and complain, and yet in the end they all kind of grudgingly admit they enjoyed it a lot. Perhaps I am unique in that when I don't like something I'm reading, I don't bother to finish it.It was literally painful for me to put this book and its predecessor down. The characters are beautifully written, full of warts and hidden gifts. The plot hums along, with fast paced action giving way to more methodical, contemplative passages, similar to, gee--life! This is not a book for someone who enjoys mindless pap. It's a book that makes you think, and feel, and marvel that one person can devise such a clever history, can show so many different sides of people, can make you laugh and shudder and cry and want to scream all within a few pages.Prophecy is a much faster read than Rhapsody. It is written without compromise; Haydon takes brave steps with characters that NO other fantasy writer would dare take. She is the new master of this genre.

Published by Thriftbooks.com User , 21 years ago
I have been hungering for this book since last fall when I read Rhapsody. Haydon is an extremely talented author, certainly the brightest to come along in this field for a long time. Her characters are well drawn and her use of language is superlative. My favorite is Achmed, the sour mooded king of the Firbolg, but was a hard choice between him and Grunthor, who is even more visible in this book than he was in the first. Haydon's female characters are not the cool and flawless heroines of more typical writing styles. This was worth every minute of the wait. Great; now I have to suffer for a year until Destiny: Child of the Sky.

Published by Thriftbooks.com User , 21 years ago
As hard as it was for me to believe that an author could make magic of this intensity twice, Elizabeth Haydon has repeated the glory, and in fact surpassed RHAPSODY, in the sequel, PROPHECY. The book picks right up where the first left off, and lets loose action twice as fast as before. This book, unlike the single point of view in RHAPSODY, splits into two fronts, following Achmed and Grunthor through mysterious ruins in Canrif to discover deep magic and tragic answers there. In the meanwhile, Rhapsody and Ashe travel westward to find the ancient lair of the fierce and mighty dragon Elynsynos.PROPHECY is full of mystery and magic, more action, romance, sadness and trimph. It also has some of the most beautiful "music" [well, lyrics] I have ever read. I could hear the tunes in my head as I read the words.I HIGHLY recommend this book. I read every fantasy I can get my hands on, and I don't believe I have ever read better epic fnntasy than this, at least any that was written in the second half of the 20th century.
Copyright © 2020 Thriftbooks.com Terms of Use | Privacy Policy | Do Not Sell My Personal Information | Accessibility Statement
ThriftBooks® and the ThriftBooks® logo are registered trademarks of Thrift Books Global, LLC