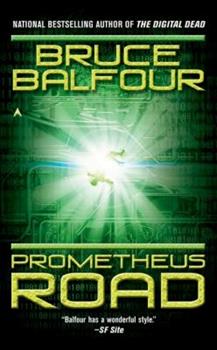 The national bestselling author of The Digital Dead transports readers to a future Earth, where one man's defiance of the gods leads him to discover they are actually artificial intelligence. Now, only he can follow the terrifying, mystical Prometheus Road to a face-off on a virtual reality battleground. Original.

Published by Thriftbooks.com User , 17 years ago
After reading three of his books, I love this author. I strongly recommend this book to anyone who has even the faintest interest in the future, or science fiction, or good novels. You won't be disappointed. Mr Balfour weaves fascinating stories, with characters you will care about. For those who are well read in the classics, there is yet another level in this book with subtle, amusing references to great poetry and literature (which is also why I enjoy the novels of Dan Simmons). In fact, I read Prometheus Road twice (something I never do) to make sure I caught everything. Even without that undercurrent, the metaphysics, the multilayered worlds, and the character development were very strong. Judging from one or two of the negative reviews, I think perhaps they missed the point, and from their references they seem to only watch movies, but anyone who likes good novels will like Prometheus Road. Be prepared to lose some sleep if you read late at night, because this book makes you want to read just a bit more, and a bit more, and a bit more.... This book isn't connected with Balfour's last two, which were more oriented to a hard science fiction audience, and it's nice to see the variety in his style, which is becoming more polished with each of his books. I'm anxious to read the next one.

Published by Thriftbooks.com User , 17 years ago
The Gods decreed that no one is allowed to enter the Forbidden Zones or the Water of Bey, but Tom Eliot is not like any of the other inhabitants of the small farming community of Marinwood. He escapes into the Zones and the Water whenever he can as an individualist in a sea of conformity. He comes to the attention of the Gods who treat him and his family like a contagious infection that needs quarantine and destruction. They kill the Eliot household, but Tom was not there so he goes on the run once he learns what happened. Tom meets the mystical hermit Magus, who explains that the Gods are actually AIs; they developed so quickly they took control from their human creators by demonstrating the ability to destroy cities like San Francisco rather easily. The western region of the United States was sealed off because of runaway nanotech reactions and the AI's knowledge that it is easier to control the area by isolating it. The AIs are fearful of Tom because with his genetic makeup, he, with the proper training, has the ability to destroy their heart (the data center in their stronghold). Tom begins his learning process as his strategic objective is to defeat the AIs. The hero's innocence at learning that the Gods are crazy AIs will endear him to readers who already will sympathize with him over the murders of his family and empathize with his desire for freedom. The villains are an enigmatic delightful seemingly omnipotent pantheon. With plenty of action and a naive champion, Bruce Balfour's work is a cross between The Matrix and the Terminator; thus would make a terrific movie. Harriet Klausner
Trustpilot
Copyright © 2022 Thriftbooks.com Terms of Use | Privacy Policy | Do Not Sell My Personal Information | Accessibility Statement
ThriftBooks® and the ThriftBooks® logo are registered trademarks of Thrift Books Global, LLC