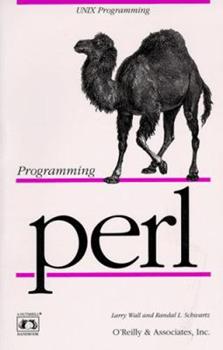 This is the authoritative guide to the hottest new UNIX utility in years, coauthored by its creator, Larry Wall. Perl is a language for easily manipulating text, files, and processes. Perl provides a more concise and readable way to do many jobs that were formerly accomplished (with difficulty) by programming in the C language or one of the shells. Even though Perl is not yet a standard part of UNIX, it is likely to be available wherever you choose...

Published by Thriftbooks.com User , 20 years ago
If you're like me, and you're shopping for a book, you immediately start reading the negative reviews and work upwards. So I started reading the reviews and read through them all, bought the book despite the many negative, and frankly, snippish comments made by many reviewers and decided that I need to respond.Many say that the examples are convoluted, or that he focuses on obscure language references. One says the book starts quickly with a discussion of the splice function. The first mention of splice is on page 355, which I certainly don't define as 'quickly'....Others say that there are no examples, or they are not explained clearly, but there's a short sample program right on page 18, and then 4 pages are devoted to analyzing the program and how it works. Further review through the book shows many small examples, especially in the sections that outline the core functions of Perl, and the core modules of Perl.Others come here and criticize Perl the language, and use this as a platform for their own advocacy of other languages. This is just silly. If you're interested in Perl, or you've been using Perl and you want to know more, buy this book. In the universe of computer programming, every language choice you make is controversial, and subject to debate, and just because some reviewers do not like Perl the language, it does not mitigate the quality of this book.That all being said, and debunking the frankly lousy reviews, I'll caution that this is NOT for beginning programmers, or people with limited technical knowledge. O'Reilly knows this, and anyone who has read this book should know this too. There is a book called 'Beginning Perl', also from O'Reilly, and written by one of the other top minds in Perl. It is easy to follow, provides many concrete examples and is where a beginning programer should begin. If you have a technical background, you will probably be able to start with this book, though Learning Perl is still worth reading.What this book provides is not only an exhaustive guide to the language of Perl, and it's abilities, but also insight into it's design, the decisions of the creator of the language (Larry Wall, the main author of the book created Perl), and the major philosophy behind Perl.This is a valuable reference and worth having.This is the book that I turn to when I have Perl questions.And this book is worth every penny I spent to get it.

Step 3 in learning Perl (for CGI)

Published by Thriftbooks.com User , 21 years ago
Why step 3? Step 1, Learning Perl; Step 2, CGI programming with Perl; and this is three. A perfect book for explaining the how and why of what you've learned along the way, yet too deep for the very beginner. I read the chapter on regular expressions first, and now my regexps are much cleaner and more powerful. Then I went to chapter one and read the rest of the book to the end. You can program just fine without this book, but you'll be working too hard. I've cut my programs down in size, while making them much more readable (and faster too!). So do yourself a favor and buy this mug. You'll be glad you did. It's such a wealth of knowledge, and it rubs off on you.

If you buy one Perl book, make it this

Published by Thriftbooks.com User , 21 years ago
Perl has affectionately been described as the swiss-army chainsaw of languages. While Java gets all the press, it is Perl which is quietly working in many back-offices, doing all sorts of menial tasks which take too long in other languages.I depend upon Perl to write small one-off programs that access and transform data. I also used it to migrate data for 1,800 employees from unstructured Excel spreadsheets to a relational database. It took me far less time and was essentially free when compared to other data migration approaches.This book is the definitive work on Perl. The authors' love of Perl comes through. What also comes through is that the authors genuinely love their audience. While you will find that they are endowed with laziness, impatience and hubris, you will soon discover that there can be an immensely positive slant to these "vices". Their sense of humor lends fun to what could become a dry subject in others' hands.Learn Perl from the people that invented the language, that work and train others in the language everyday. Buy this book.

A wonderful book, for the bright and patient

Published by Thriftbooks.com User , 22 years ago
While I was still working my way through Programming Perl, I wrote on comp.lang.perl.misc:"The authors aren't afraid to use a construct before they've even mentioned it, let alone described how it works, and at least some of the (mostly uncommented) examples are distinctly non-trivial. It's very dense, with a single sentence often expressing something that I'd spend a whole pp on, were I writing it for a programmer's magazine. It's not quite as slow going as some of the page-an-hour philosophy texts I read in college, but it's probably the closest I've come to that in the nearly twenty years since then. Definite perceptual bi-stability: It flickers between 'loads of fun' and 'intensely frustrating'."Having finished it and having written more than a few Perl scripts, I find it an invaluable reference - I look forward to the day when I can write a non-trivial script without referring to it!All in all, I found it a wonderful book, the One Book To Get If You're Only Getting One. I do think that the density of the book (and its free use of 'forward references') is a good preparation for Perl programming: If you can understand the book and its examples, you'll have little trouble reading any Perl you might come across.But - as you can gather from some of the pans here - this book isn't for everyone. If you already know two or three other languages and have a deep-seated need to understand a language's semantics, buy this book. If what you really want is just to quickly learn how to modify some scripts you found on the Net, then this probably isn't the book for you.

Not a beginner book, but a must-have Perl reference

Published by Thriftbooks.com User , 22 years ago
If you just start learning Perl, don't buy this book. It is a reference book, not a tutorial book. If you are a serious Perl programmer, I will be surprised if you don't have this book by now.
Trustpilot
Copyright © 2022 Thriftbooks.com Terms of Use | Privacy Policy | Do Not Sell My Personal Information | Accessibility Statement
ThriftBooks® and the ThriftBooks® logo are registered trademarks of Thrift Books Global, LLC