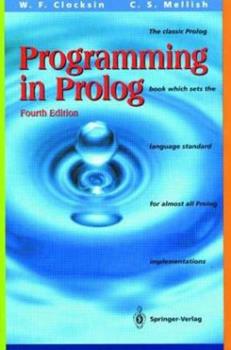 Here is the book that helped popularize Prolog by making it accessible to a wide range of readers. This edition includes much new material and improved presentation. It will serve as an invaluable reference work for anyone who wants to study and use Prolog as a practical programming language.

Published by Thriftbooks.com User , 13 years ago
Programming in Prolog is a clear, precise introduction to Prolog from the ground up. While is does start with the basics, it is an incredibly thorough text, covering all minutia of the language. The text is clear, easy to understand, and to the point, moving quickly through topics without sacrificing understanding. I used this book as a supplementary text in an upper-division college course. After reading only the first four chapters, I knew things about the language that the instructor did not. I highly recommend this book to any programmer of any skill level that is interested in learning the Prolog programming language. Additionally, The following two books were recommended in the preface of Programming in Prolog. The first as a quicker (though not as complete) overview for the experienced programmer, and the second as a language reference. Clause and Effect: Prolog Programming for the Working Programmer Prolog: The Standard: Reference Manual

The Best Book on Prolog

Published by Thriftbooks.com User , 15 years ago
As good in 2007 as it was when published first time. There is no better introduction to Prolog

Published by Thriftbooks.com User , 21 years ago
This is an extreme valuable book on the Prolog programming language that every computer science person should own. Prolog itself is actually a fairly simple language to learn, albeit slightly obscure. It's reputation for complexity comes from its non-standard implementation, but if you don't enter into it expecting it to look and behave like other languages then you should be all right. Once you get past the mathematics and logic, you should be able to get your mind working in that particular direction. This book is a very handy guide for getting the programmer into the Prolog mindset as well as bringing one up to speed on all the (sometimes very confused) syntax.This book, like Prolog itself, is not for the beginning programmer. If you have a good background in logic or mathematics, then you should find this book to be very rewarding.

Published by Thriftbooks.com User , 22 years ago
Prolog is a complex subject, especially for someone not well familiar with mathematical logic. Thus, it is very important how the foundation would be laid down. Typically the books I had read on Prolog tend to two extremes. They are either too condensed for such a complicated subject as logical programming, or too broad and mathematically intensive. I would put this book into the first category. Though very concise and well structured, this book does not seem to be a good primer. I would rather recommend the book of Ivan Bratko "Prolog Programming for Artificial Intelligence (International Computer Science Series)" 2nd edition (the third edition of this book is due in August 2000). Ivan Bratko had managed to find the optimal style of presenting both the essence and the practical aspects of the language. Bratko's book covers various practical applications of the language and manages to convey the basic concepts of Prolog without overwhelming the beginner with too abstract or too condensed passages.Nevertheless, "Programming in Prolog" could be a very good programming reference once you are relatively comfortable with the language.

Published by Thriftbooks.com User , 23 years ago
Programming in prolog is an excellent book, good reference about the core of prolog and its Edinburgh implementation. This book contains all you have to know about the "core". Easy to understand and fast to read.
Trustpilot
Copyright © 2022 Thriftbooks.com Terms of Use | Privacy Policy | Do Not Sell or Share My Personal Information | Accessibility Statement
ThriftBooks® and the ThriftBooks® logo are registered trademarks of Thrift Books Global, LLC