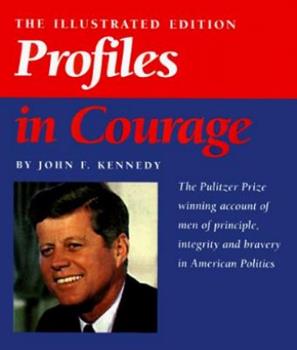 The Illustrated Edition: The Pulitzer-Prize winning account of men of principle, integrity and bravery in American politics is now available in a handsome, illustrated format . Eight men who served in the United States Senate were selected by John F. Kennedy as models of virtue and courage under pressure.

Published by Thriftbooks.com User , 14 years ago
Liane's notebooks are beyond charming -- she carps about the quality of her dresses from Poiret on one day, reads the "Imitation of Christ" the next, disses Collette rather harshly, and pleads with God to reveal himself to her. Her contradictions are marvelous, she's funny and fearless in her way. I adore this book, and am on my second reading of it.

Published by Thriftbooks.com User , 17 years ago
Here is a book of immeasurable value, a postcard from another age. Liane is a woman who flourished in the 1880s and 1890s (although she is writing in the period 1919-1941) who can speak to this age and this reader. This is a journal, it's content the minutiae of life, and is marked by lack of pretension, realism and extreme honesty. Famous names abound - Proust, Max Jacob, Poulenc, Coco Chanel... but the underlying story is a love story. It is the love story of Liane and Nathalie Barney, and the love story of Liane and Georges Ghika. The story is marked by reticence, by a finesse one recognises as a characteristic of pre world war European culture. In itself this is a disturbing measure of how our world has been transformed, and lessened, by the loss of cultural standards as a result of the extermination in the wars. Be warned, this is a foreign territory; we have to try a bit harder to appreciate this sensibility. Liane portrays herself as human, as ignorant, as determined to survive, as damaged by her origins and her associates, and as someone who succeeded on the path of the 'artiste', the beautiful woman who successfully sells herself while allegedly practising an art. She knew and admired Sarah Bernhardt, and pays tribute to her dominant gift, her marvellous voice. It is said that Nathalie Barney was the love of Liane's life, and Liane's journal bears this out by what it does not say, by what it does not reveal. Every statement about Nathalie, who rejected Liane's love to play the field, reveals Liane to be a woman who had given all of herself, unaffected by the distance and lack of contact with Nathalie. Liane was one of the great romantics. Her romanticism makes of her a great contemporary, of all eras. This sensitivity married to such pragmatism and determination makes Liane someone to value and respect. How sad that modern readers have rejected her book because it does not reveal intimate lesbian details of who touched who where. Perhaps lesbianism in the 1890s was a bit more innocent than it is now? The period of Liane's fame is well in the past when she begins writing. She has mundane worries such as inflation and war wiping out most of her income, an ailing and discontented husband to contend with, and her own failing health. When her loves failed her (for both Nathalie and Georges rejected her for others, despite her beauty and charm - perhaps she was too honest for them), Liane turned to the Catholic Church for solace, and became a rather saintly woman, though she didn't herself think she was more than a sinner. Liane is someone I like enormously, and I am sad that I was only four years old when she died, for I would have liked to know her. In a sense, a poignant one, I know her through these notebooks.

what a big life

Published by Thriftbooks.com User , 19 years ago
Imagine if Satine from the movie Moulin Rouge had lived and actually married the Duke. That's the life of Liane De Pougy. Long before the sexual revolution was even daydreamed about Liane was doing exactly what she wanted. Instead of being crushed by society she soared, married well, enjoyed life and in her old age, she changed her mind,repented and became a nun. This should be made into a movie. I liked it.

Don't pass this one up

Published by Thriftbooks.com User , 21 years ago
"Profiles in Courage" does not belong to any of my preferred genres. I became interested in it after researching John Quincy Adams. The film "Amistad" started me down this path and eventually led to JFK's Pulitzer Prize winning book. It was written while he was still a Senator and focuses, for the most part, on historic politicians. Kennedy obviously admired these men, not for their great successes but for the personal price they all paid as a result of choosing to do what they felt was right.Each man gets at most a chapter, and so Kennedy limited himself to one or two important events in their political careers, often their last stand. Not only are these men admirable but they are also very real. He manages to show us the human, less than perfect, side of each while convincing us of their moral strength. Each chapter leaves you wanting to know more about these men, who helped to shape American history.The nice part about the book, and probably the key reason it won a Pulitzer, is that each event reads like a thriller. These are interesting stories and because Kennedy wrote them in chronological order with a few historic segues, the whole thing holds together to give us a better feel for the sweep of history. We willingly learn about the underlying currents that can inexorably drive a country in a certain direction."Profiles in Courage," is an easy read that teaches as it entertains. Kennedy seems to be encouraging us to look back at a past where "politician" was not a dirty word and in so doing, we are left with the suspicion that Kennedy himself, was trying to live up to those outmoded ideals. Knowing his fate, every word seems to have a poignant aura that makes it all the more memorable.

A must read for anybody who follows politics

Published by Thriftbooks.com User , 22 years ago
JFK's profiles in courage, is simply a look at six differnent senetors who faced tough situations, and made the right choice. This book is about how people can overcome popular opinion and the pressure of their peers to make a desion that they know is right. What JFK points out is that while in hindsight many of these choices that were made by these politicans were very obviously correct, they went aginst overwhelming odds to what was right. If the people examined in this book had lacked this courage, the Lousiana purchace whould still be French, Andrew Johnson would have been expelled from office and congress would have almost totall power over this country. This is not a book with a lot of brilliant politcal commentary, but a book showing people just what pressures that people who are in high office face, and what characteristics they must have to overcome them. Everyone who votes should have to read this book, just so they can know what courage it has taken to build this country.
Trustpilot
Copyright © 2022 Thriftbooks.com Terms of Use | Privacy Policy | Do Not Sell or Share My Personal Information | Accessibility Statement
ThriftBooks® and the ThriftBooks® logo are registered trademarks of Thrift Books Global, LLC