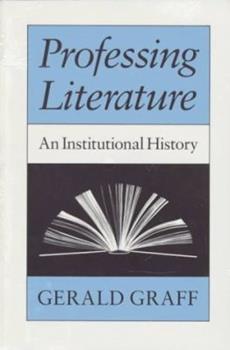 This description may be from another edition of this product. Widely considered the standard history of the profession of literary studies, Professing Literature unearths the long-forgotten ideas and debates that created the literature department as we know it...

Published by Thriftbooks.com User , 14 years ago
This book was a set text on a PhD course and it was interesting and useful, particularly for anyone who is looking to enter higher ed as a lectureer/professor.

Published by Thriftbooks.com User , 21 years ago
This detailed history of the rise of English departments in the U. S. is lucid, cogently argued, and replete with quotes from primary sources. By detailing the arguments over how (and, in the very beginning, whether) English should be taught, from the pre-English department days of the early nineteenth century into the 1960s, Graff takes the reader decade by decade through the controversies of the period, showing how theory is often mitigated by practice and how we have uncritically adopted "the habit of thinking of institutions as if they were unmediated projections of the values, methods, and ideologies of major individuals and movements." Graff would argue that though ideological debates help shape the institution, the process of institutionalization also reshapes ideologies.For the reader interested in current developments in literary theory, this should prove an invaluable sourcebook.
Copyright © 2020 Thriftbooks.com Terms of Use | Privacy Policy | Do Not Sell My Personal Information | Accessibility Statement
ThriftBooks® and the ThriftBooks® logo are registered trademarks of Thrift Books Global, LLC