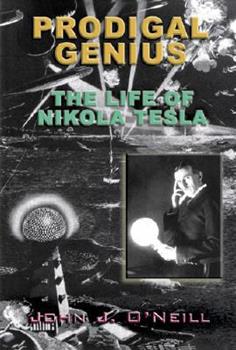 First published in 1944 and long a favorite of Tesla fans, this is a definitive biography of the man without whom modern civilization would not exist. Nikola Tesla, pioneer of electrical engineering, was a close friend of Pulitzer Prize-winning author O'Neill, and here, O'Neill captures the man as a scientist and as a public figure, exploring: . how Tesla's father inspired his life in engineering . why Tesla clung to his theories of electricity in...

The seminal biography of a staunchly ethical man of science

Published by Thriftbooks.com User , 14 years ago
Prodigal Genius: The Life of Nikola Tesla is the amazing true-life biography of inventor extraordinaire Nikola Tesla (1856-1943), a friend of Mark Twain and George Westinghouse, and a rival of Thomas Edison. Tesla invented the AC electrical current; his talent for inventions and scientific advancement was enhanced by his ability to visualize three-dimensional images of his inventions, saving money and effort on prototype constructions. Though his prodigal talents brought him great wealth and recognition - he made his first million before he turned forty - he refused to accept the Nobel Prize, chose to give away his royalties as a token of friendship, and died nearly penniless. His dream was to provide the world with sources of energy and wonders of technology that were free to enrich the lives of all, rather than fuel the profit margin of corporate sponsors. Yet for his selfless ideals, he received derision and disdain. Written by John J. O'Neill, a personal friend of Tesla's, and originally published in 1944, Prodigal Genius remains the seminal biography of a staunchly ethical man of science, who deserves far more honor than history has given him.

A Fascinating Book About the Amazing Life of Nikola Tesla

Published by Thriftbooks.com User , 17 years ago
This book tells the fascinating story of an amazing Serbian boy, Nikola Tesla, who was born in 1856, in the area we now call Bosnia. The author explains how Tesla's accomplishments brought forth our modern electrical power era and provide the foundation for the industrial system on which the entire world is built. Tesla's mother could repeat, without error or omission, thousands of verses of the national poetry of her country. Tesla shared her retentive memory. He had another ability that he only revealed to his mother. If Tesla thought of an object, it would appear before him exhibiting the appearance of solidity and massiveness. He used this ability to visualize the solution to creating the first alternating current generator. The first time Tesla's ability to visualize helped him in his quest to develop an alternating current generator, occurred when he suggested to a college professor that alternating current would solve some of the problems with a piece of electrical equipment that could be used either to generate electricity or if supplied energy could operate as a motor. As his professor demonstrated the machine, the solution to the problem came to Tesla in such a vivid, illuminating flash of understanding that he knew his visualization contained the correct and practical answer. He saw both the equipment operating without the problems and doing so efficiently, however, he could not see the essential details of how this could be accomplished. In Feb of 1882, Tesla took a walk in the city of Budapest with a former classmate. While a glorious sunset overspread the sky, Tesla engaged in one of his favorite hobbies-reciting poetry. The setting sun reminded Tesla of some of Goethe's beautiful lines: The glow retreats, done is the day of toil; It yonder hastes, new fields of life exploring; Ah, that no wing can lift me from the soil, Upon its track to follow, follow soaring... Suddenly, Tesla snapped into a rigid pose as if he had fallen into a trance. "Watch me!" he said, "Watch me reverse it!" Tesla's friend said, "I see nothing, are you ill?" "You do not understand," said Tesla, "It is my alternating-current motor I am talking about. Can't you see it right here in front of me, running almost silently? It is the rotating magnetic field that does it. See how the magnetic field rotates and drags the armature around with it? Isn't it beautiful? I have solved the problem." Tesla now had an electrical system utilizing alternating current, which was much more flexible and vastly more efficient than the direct-current system then being used. But now Tesla had another problem, convincing the rest of the world that his alternating-current power system was simpler, flexible and freed electricity to be sent long distances. The direct-current systems being used at that time were not able to send electricity long distances without major problems. The fact that our power system today uses alternating-current shows that Tesla was finall

This book is an experience that will change your life.

Published by Thriftbooks.com User , 23 years ago
Here is a story of a man born in the glorious womb of science, a man who so completely understood the laws of nature and the scientific method that he commanded total dominion over the physical universe.Once you read this book you will find it difficult to name an aspect of modern life that hasn't been affected by the hand of Nikola Tesla.Some of Tesla's ideas were so far ahead of his time that to the people of his day, they were considered impossible; his vision of the world of the future was mocked and laughed at even by other scientists. Over time scepticism about the possibilities of science and technology has waned. Unfortunately for us the world was not yet ready for Tesla, this man out of time, and he died with his greatest achievments alive only in his mind.

Published by Thriftbooks.com User , 24 years ago
I read this book in April 1945, just after it first appeared. A fantastically inspiring book for me, then a 14-year-old would-be genius. It nourished me intellectually and emotionally for five years -- until I outgrew it. The author was science editor for the New York Herald Tribune, but like so many Tesla enthusiasts today, was uncritical of Tesla's theoretical ideas, neither recasting them in today's language of physics, nor criticizing them where they are clearly wrong (or wrong-headed). Still, it's a book scientifically-oriented folks should read.

Who was Nikola Tesla? Here's your answer...

Published by Thriftbooks.com User , 25 years ago
If you've never read anything by or about Tesla, or even if you've only read his technical writings, here's the book that will answer your questions about Tesla. Written from the point of view of someone who knew him, Prodigal Genius gives an amazing glimpse into the personality of this remarkable inventor. There are lengthy passages about his childhood and early career including how he got cheated out of $20,000 for inventing alternating current. There are also thought-provoking stories about how some of his inventions backfired and almost shook down a city block or two! Even if you're not a Tesla nut, Prodigal Genius is a great read--it's exciting enough that it's hard to put down. If you weren't a Tesla nut when you picked it up, you will be when you put it down!
Trustpilot
Copyright © 2022 Thriftbooks.com Terms of Use | Privacy Policy | Do Not Sell or Share My Personal Information | Accessibility Statement
ThriftBooks® and the ThriftBooks® logo are registered trademarks of Thrift Books Global, LLC