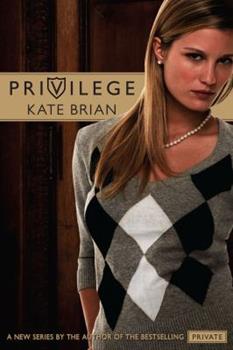 (Book #1 in the Privilege Series)

MOST GIRLS WOULD DIE FOR A LIFE OF PRIVILEGE.... SOME WOULD EVEN KILL FOR IT. Ariana Osgood ruled exclusive Easton Academy -- until she was arrested for murdering Thomas Pearson. She's spent the past two years at the Brenda T. Trumbull Correctional Facility for Women plotting her escape and is determined to get a second chance at the glamorous life she left behind. And Ariana will do anything to get her way.... From the author of the bestselling Private...

Published by Thriftbooks.com User , 12 years ago
Ariana Osgood is obviously a girl that has had everything handed to her for her entire life. There have never been any consequences to any of her actions, because Daddy just buys them off. The necklace is a perfect example. She truly believes she did nothing wrong to land her in this mental hospital. Everything is everyone elses fault. Her victims "had it coming" or "they forced her to do it". In the end she finds yet another person to blame for her actions because, as she put it "she misread the person and their intentions". Rather than just take her punishment, she finds a way out. Breaking into people's houses and complaining about the selection of clothing you have to choose from to steal, is another example of how highly she thinks of herself. When someone opens their home to her and access to everything that's theirs, all she does is complain about how it's not to her standards. Now what I found interesting was, rather than try to blend in with society and live a normal life, she decides that's not good enough, so she finds a way to pick up where she left off two years ago, and get her privileged lifestyle she's always had. But how long can she keep this up? I really liked this book because it keeps you guessing. Things aren't as they appear. I can't wait to read Beautiful Disaster.

Published by Thriftbooks.com User , 12 years ago
Having read Kate Brian's Private series, I think that "Privilege" is better. There are more twists & turns that I never saw coming, & we are introduced to a whole new cast of characters. Ariana Osgood, from the Private series, is the main character, & she will do anything to break out of prison & get her former life back. Well, in "Privilege" we see that she does do anything. Even though Ariana is clearly a psychopath, she does have some human moments, so it is easy to have at least some compassion for her. Some of the things she gets away with are a little far fetched, but it all adds to the over-the-top feel of the novel.

Published by Thriftbooks.com User , 12 years ago
REVIEW of Privilege by Kate Brian By Anna R. Haze When I read a book I look to see something that will help me better understand myself or my friends. Privilege by Kate Brown was provided to me for a review by the wonderful Simon Pulse Teen division for Simon & Schuster. I learned nothing about myself or friends but I certainly learned that I could escape into a masterfully told exciting novel. Kate is a marvelous story teller. Without being too weird this book reminded me of some of the great French masterpieces by Victor Hugo and Alexander Dumas. Not by the prose but by the intricate storytelling that defies the expected. I never want to tell anything about a plot or give even a hint as to what to expect. Suffice it to say Ariana is not your typical girl and she should not be messed with if you value life and living. She is quick to make decisions but when she is wrong they cannot be corrected. She is conniving and ingenious and while not to be emulated she is certainly interesting. I admit I am hooked and will order the second book In this series when it is released.

Published by Thriftbooks.com User , 12 years ago
Privilege centers around the beautiful and formerly rich Ariana Osgood. She used to have everything.. before she was put away for the murder of one of her friends. She now resides at the Brenda T. Correctional Facility for Women. A more upper class type of incarceration unit that she will now do anything to get out of and get her luxurious former life back.. at any cost. While there she meets a girl named Kaitlynn. They both share their stories. It turns out Kaitlynn was due for an inheritance from her father but never recieved it due to her best friend who cheated her out of it and framed her for the murder. As the year goes on they become closer and tell eachother their secrets as it seems they only have eachother at Brenda T. Soon Ariana vows to get them both out of there and get some revenge, freedom and redemption for both herself and Kaitlynn and what she finds along her journey after escaping will keep you enthralled and interested till the end. She plans her escape and devises a perfect plan to get both Kaitlynn and herself out of Brenda T. so they can live the lives she thinks they both deserve and unjustly lost. She soon finds the friend who betrayed Kaitlynn and from there on out she slowly plans her revenge and tries to get her hands on the money Kaitlynn's friend Briana stole in order to get back their former lives. Ariana is a very interesting character. She will do anything to achieve her aims and despite losing it and "accidentally" killing some of her friends she finds herself to be above that of a normal murderer. This book is so good you won't be able to put it down. I read the whole thing nearly straight through and the book will keep you on the edge of your seat with all the twists and mystery. The detail to all the upper class luxuries and lifestyle's of the girls and people involved in the book was perfect. The book reminded me of The Fugitive meets Dallas, with hints of American Psycho thrown in, except involving young adult girls. After reading this excellent mystery I think I may buy another in the "Private" series, the only thing that I didn't like was that I wanted to know more about what exactly happened to Kaitlynn after the secret was revealed and Ariana finally knew the truth. Excellent book. Highly Recommended.

Published by Thriftbooks.com User , 12 years ago
When I ordered this, I fully expected to dislike it. I am reviewing new books for a library in a new high school, and I have read some books recently that have made me cringe. I was surprised, to say the least, when I found that I enjoyed this book. The story has been rehashed by a number of reviewers, so I will stick with the writing and subject matter. The author's writing is crisp and clean and the subject matter was appropriate for the age group intended. There is certainly male/female attraction, but nothing overt happens. There is drinking and partying in the story, but most teens have been exposed to this by this age. There were sufficient twists and turns to keep the readers attention and the plot was not as predictable as it might have been. Overall, this is a great book for the intended age group. I believe it would be well received by average middle school and lower high school level readers. Higher level readers will not be particularly interested, but it wasn't written with that group in mind.
Copyright © 2020 Thriftbooks.com Terms of Use | Privacy Policy | Do Not Sell My Personal Information | Accessibility Statement
ThriftBooks® and the ThriftBooks® logo are registered trademarks of Thrift Books Global, LLC