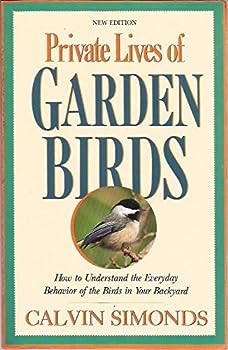 Private Lives of Garden Birds: How to Understand the Everyday Behavior of the Birds in Your Backyard

Brimming with stories, wisdom, and expert knowledge, this delightful book gives enthusiasts a peek into the private worlds of eleven North American birds: swallows, blue jays, chickadees, song... This description may be from another edition of this product.

I recommend for rookie bird watchers

Published by Thriftbooks.com User , 18 years ago
By focusing on common birds (birds that are common in North America, that is), this book gives readers a very good chance of being able to go somewhere nearby and engross themselves in watching some of the birds they just read about. It is also a rather engaging, quick read and contains many interesting kernels of information. This combination makes it the most un-intimidating introduction to bird watching I have read. Wildlife watching is often frustrating, but searching for these birds is rewarding whether one lives in the country or the city. This is not one of those books that overwhelm readers with lists and pictures of species beginners will probably not see. Simonds' love of birds is apparent, even though he digresses a bit too much.Although the book does contain an index, information would be easier to find if the chapters were subdivided. In addition, a few references are recommended in the last chapter, but I wished the book had a full bibliography.

Essays that surprise and intrigue.

Published by Thriftbooks.com User , 18 years ago
I am not a birder nor much of a gardner, but I love this book. Birders and gardners I know also love it. The woman in the campsite next to mine in a Maine campground explained to me the lives of the osprey nesting nearby. When I tried to show her that I knew a thing or two about birds that I had gleaned from Calvin Symonds, she came back with "Oh yes, I have that book at home and enjoy rereading it." My mother who at 97 can still tell you the names of all the birds at her many birdfeeders keeps a copy of Symonds on the crowded table next to the recliner where she spends her days.To understand what the birds around you are doing you need to see them, identify them, observe them over a period of time, and know how to interpret what you see. I often fail steps one and two and do even worse on steps three and four. Calvin Symonds moves through all four steps with grace and humor. He regards the everyday birds of his New England farm with such affection that he cedes his garage to swallows for four months every summer. He makes out the cacaphony of the blue jays as an animated assertion of family ties and draws useful life lessons from activity that many find annoying and even criminal.The gentle expressive essays repeatedly surprise and intrigue me as they explore benieath the surface of what eleven familiar birds - from mockingbirds to crows - do. Symonds shows the reasons for their actions and describes the debates among scientists about how to explain what they observe. I hope one day he will extend the list of birds he has made familiar and fascinating to at least one non-birder.

Published by Thriftbooks.com User , 19 years ago
When I discovered and read the book "Private Lives of Garden Birds" I felt as if I had been given a very special gift that enhanced and broaden my understanding of the nature that surrounds my everyday life. Like many, I love birds and enjoy observing them in my back yard and have often wondered what is really going on with all the fluttering and chattering. With this book, Calvin Simons has given everyone who enjoys birds a head start in understanding the dynamics that are being played out between the birds. All the social interaction, the whys and wherefore, and even the "hootenanny" is explained in a way that make you feel as if Calvin Simons is sitting with you in your back yard having a conversation about your birds. I especially enjoy the layout of the book which gives each of the several birds described an entire chapter, allowing the reader to become very familiar with that species. After reading about a particular bird it is easy to focus on that bird alone and understand more clearly the dynamics and social interactions that are going on in your back yard. After reading this book one cannot help but discover all sorts of secrets about the bird activities going on in the neighborhood. I learned that I had a Phoebe living near me that had previously gone unnoticed. This is a wonderful book to give as a gift to anyone who has a bird feeder because the fluid style of writing and clarity with which a complicated topic is explained, makes this book a pleasure to read.
Trustpilot
Copyright © 2022 Thriftbooks.com Terms of Use | Privacy Policy | Do Not Sell or Share My Personal Information | Accessibility Statement
ThriftBooks® and the ThriftBooks® logo are registered trademarks of Thrift Books Global, LLC