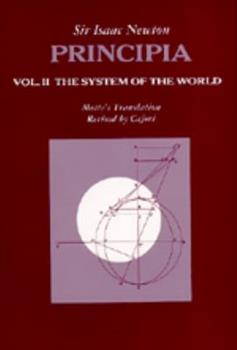 Principia: Vol. II: The System of the World

I consider philosophy rather than arts and write not concerning manual but natural powers, and consider chiefly those things which relate to gravity, levity, elastic force, the resistance of fluids, and the like forces, whether attractive or impulsive; and therefore I offer this work as the mathematical principles of philosophy.In the third book I give an example of this in the explication of the System of the World. I derive from celestial phenomena...

Must for Physicists and Historians of Science.

Published by Thriftbooks.com User , 23 years ago
Newton's "Principia" was the crowning achievement of 17th Century Natural Philosophy, bringing together the works of great thinkers like Galileo and Johanes Kepler. This great work supplied the momentum for the Scientific Revolution and dominated physics for over 200 years. Although it was later demonstrated to have limitations at the atomic level, the principles of Newtonian physics are still applicable to much of our everyday lives. The casual reader may find this book difficult to work through, however. Newton's three laws of motion are not stated in the language that is used in modern introductory physics texts. A good companion to this book is "Feynman's Lost Lecture" in which Richard Feyman demonstrates planetary motion using the same geometric techniques employed by Isaac Newton, but in a more clear, modern style.
Copyright © 2020 Thriftbooks.com Terms of Use | Privacy Policy | Do Not Sell My Personal Information | Accessibility Statement
ThriftBooks® and the ThriftBooks® logo are registered trademarks of Thrift Books Global, LLC