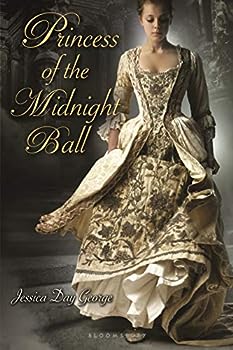 (Book #1 in the The Princesses of Westfalin Trilogy Series)

Published by Thriftbooks.com User , 12 years ago
Based on the fairy tale of The Twelve Dancing Princesses, Jessica Day George pens her version of Rose and her eleven sisters. Due to a bargain their mother made, they must go down to Court of King Under Stone and dance the night away. What first begins as a mystery to the numerous ruined pairs of dancing slippers soon becomes the most gossiped rumor in the land. The girls are forbidden to talk about their curse; thus their father has no idea what's happening. Only death can cure the curse their mother left upon them when she died. Soon, however, the sisters become gravely ill. Even in sickness they must dance, causing their health to linger in and out of danger. Princes come from all over the land to unravel the mystery - only to die a mysterious death some days after leaving the castle. The deaths of so many princes cause alarm throughout the land. A lowly gardener, who has fallen in love with Rose, is determined to uncover the secret. When he does find out, is there anything that he can do to save the girls? The cover alone attracted me to this book. It's gorgeous, but the delightful tale sucked me in. The dark undertones combined with the forbidden love story made the book extremely hard to put down. Reviewed by: Jennifer Rummel

Published by Thriftbooks.com User , 12 years ago
Jessica Day George revisits another fairy tale in "Princess of the Midnight Ball," a retelling of the classic "Twelve Dancing Princesses" story. Princess Rose of Westfalin and her eleven younger sisters (all named after flowers) are under a curse. Doomed to spend their nights dancing for the fearsome King Under Stone, their worn out slippers cause their father, the king, to declare that any prince who can discover the princesses' secret can marry the daughter of his choice and be the next king. But the princes from the neighboring kingdoms not only fail in the quest, they die in mysterious accidents after leaving Westfalin. And the princesses are helpless to break the enchantment, as they are unable to even speak of it to their loved ones. Enter Galen, a young soldier newly returned from a war. He takes on the quest (with the aid of magical gifts) to not only discover the secret, but to save the princesses before their fate is sealed. George has all the elements of the original fairy tale in here, and doesn't deviate too much from the original story line. The only difference she introduces is the fact that the princesses are dancing against their will, as in most retellings (and the original story) the princesses want to go to the secret kingdom to be with their magical suitors. But she does a great job of keeping the original spirit and plot of the story and embellishes it in a way that enhances, not detracts. Being a knitter myself, I also enjoyed the addition of the hero who knits - and the patterns that George includes at the end of the book. Overall, an enchanting version of the "Twelve Dancing Princesses". Great if you're into fairy tales and their retellings. Highly recommended.

Published by Thriftbooks.com User , 12 years ago
A beautifully written fantasy novel based on the fairy tale "Twelve Dancing Princesses." There are many delightful twists that make this story all its own. The hero is a wonderful character, and he knits! The princesses are appealing, and I got caught up in their conflict. The plot is involved and compelling, and has enough depth to satisfy the tastes of adventure lovers everywhere. I have loved the author's previous novels, so when I say this is my favorite so far, that's saying a lot. Highly recommended to anyone who enjoys fantasy or fairy tales or adventure novels.

Published by Thriftbooks.com User , 12 years ago
A thuroughly fun read. Perfect for reading to my eight-year-old daughter and a no-stress read for me.

Published by Thriftbooks.com User , 12 years ago
Every night, twelve princesses go to bed and are locked into their room. Every morning, their dancing shoes are worn through. In Jessica Day George's retelling of the famous fairy tale, the dozen princesses are dancing in order to fulfill a contract their mother made with an evil sorcerer imprisoned beneath the earth--the King Under Stone. But the sorcerer manipulated their mother, who is now deceased, and he has nefarious plans for the girls, who will clearly never escape his clutches... Not without help from a very nice and brave young soldier named Galen, who ends up working as an undergardener at the palace and quickly develops feelings for eldest princess Rose. Rose is the weary, harried mother figure to her eleven younger siblings. When she falls ill, the King Under Stone has no patience with her troubles. One thing this book does is give us a sense of how hard it would be to be one of the twelve dancing princesses of fairy tale fame. Apparently enchanted princesses don't get any nights off! Add in political intrigue and the ominous fates of those who try to help the princesses, and things seem to get worse by the minute. But Galen has received magical help in the form of an invisibility cloak, and he also has a talent for knitting--which turns out to be surprisingly useful. A familiarity with the fairy tale does not detract from the suspense as the author's retelling takes unexpected twists and turns within the parameters of the original story. It is, of course, difficult to sort out twelve characters--of Rose's sisters, Pansy and Poppy stand out the most. But this is really Rose's story, and Galen's even more so. A wholesome and intriguing read for the 9- to 12-year-old crowd, who might also want to take a look at Jessica Day George's previous books, Dragon Slippers and Sun and Moon, Ice and Snow.
Copyright © 2020 Thriftbooks.com Terms of Use | Privacy Policy | Do Not Sell My Personal Information | Accessibility Statement
ThriftBooks® and the ThriftBooks® logo are registered trademarks of Thrift Books Global, LLC