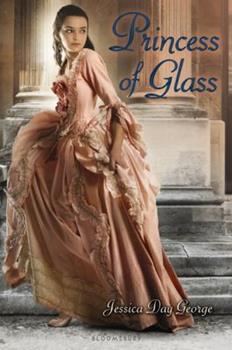 (Book #2 in the The Princesses of Westfalin Trilogy Series)

Hoping to escape the troubles in her kingdom, Princess Poppy reluctantly agrees to take part in a royal exchange program, whereby young princes and princesses travel to each other's countries in the name of better political alliances-and potential marriages. It's got the makings of a fairy tale-until a hapless servant named Eleanor is tricked by a vengeful fairy godmother into competing with Poppy for the eligible prince. Ballgowns, cinders, and enchanted...

Published by kayleen , 2 years ago
this book keeps the love you developed from the first book and gives a new side to one of the sisters. which allows you to enjoy yet another adventure.

Published by Thriftbooks.com User , 11 years ago
There is nothing better in a fairy tale than magic, intrigue, a little flirtation, a dastardly smart evil villain and a strong leading woman. Poppy makes a wonderful heroine by defying evil faerie, meets her Prince Charming, saves her Prince Charming, saves him again, knits a bit, then conquers her own nightmares that have followed her from her past midnight dancing days. Altogether a wonderful success from the wonderful Jessica Day George!

Published by Thriftbooks.com User , 11 years ago
Had I not received this book during the last week of school, it's quite likely that I would not have been able to read it for months, because my students would have taken it from me by force and refused to return it. (Honestly, they nearly came to blows when they saw it on my desk). My girls that read Gossip Girls wanted it just as much as the girls who read Warriors, which is, I think, saying something. And having read the book, I'm happy to say that my students' anticipation would have been rewarded with a fine read. Princess of Glass is more a companion that a sequel to Princess of the Midnight Ball; though some of the characters are the same, the story is brand new. Freed from the curse of the King Under Stone, Princess Poppy and her sisters have each been sent to a different kingdom to foster peace between the nations. Poppy has been sent to Breton to stay with relatives, including her cousin Marianne. Prince Christian of Danelaw has also been sent to Breton, and along with Dickon Thwaite, Marianne's suitor, the four young people become fast friends. Another force is at work, however, and when a beautiful young woman in glass slippers appears at a ball and entices all the men, Poppy will be forced to use both her knitting needles and her dancing slippers to save her new friends. Jessica Day George has again rewritten a fairy tale and made it into something new and entirely refreshing. The elements of the original are all there, but the result is fresh instead of predictable. The characters, especially Poppy, are delightful, and my students will like this book as much as I did. I doubt this book will spend a single night in my classroom once school starts in the fall. Fortunately, Princess Poppy has many more unwed sisters. I can't wait to read their stories.

Published by Thriftbooks.com User , 11 years ago
An avid fan of fairytales and anything by Jessica Day George, I loved spending a summer evening with Poppy. I spent time with the sisters as they danced for the King Under the Stone and was excited to be able to enter the world of the courageous and spunky Poppy. What a wonderful twist the author takes messing together Twelve Dancing Princess and Cinderella. I didn't like Ella (Eleanor) in the beginning. She was whiny and selfish but then her story is revealed and the reader ends cheering on Poppy and Ella as they take on evil and also get their prince. Poppy is a wonderful, capable, intelligent princess and Christan, her prince, comes across pretty much like a normal handsome young man. It's great what Jessica does with a familiar tale. It's all their the pumpkin coach, the glass slippers and the midnight transformation just with a twist that is just scary enough to keep you reading. I hope Jessica will keep writing these wonderful takes on fairytales.

Smashing Sequal to "Princess of the Midnight Ball"

Published by Thriftbooks.com User , 11 years ago
After all the nights she has spent dancing for the wicked King of Under Stone, Princess Poppy refuses to dance. She has plenty else to do: knitting, gambling, and participating in an exchange program concocted by her father and the rulers of Ionia. Enter a miserable servant named Ellen, a former lady who is desperate to reagain her wealth, no matter what. Add a vengeful fairy godmother, glass slippers, and spells, and you got a huge enchantment. As a supporting character, Poppy gave off a determined and fiesty air. As a main character, you can't help but like her. She's got a mind of her own and is intelligent, but at the same time, she's haunted by nightmares of the King of Under Stone and his court. I'm glad she gets her own story. Christian was a real person. He was neither the classic "perfect prince", or the selfish spoiled brat. He clearly knows his duty is to his country, yet at the same time, he feels the need to escape it all. Christian shows clear intelligence, loyalty, and courage. The only part of the book where he annoyed me was when he was mooning over "Lady Ella". At first, Ellen seemed like a selfish brat. She can't do anything right, and she's rude to the people who have taken her in. But as the story progressed, you couldn't help but sympathise for her misfortune. This is the most original "Cinderella" retelling that I've read. I enjoyed how Ms.George kept key points in the story (the glass slippers, fairy godmother), yet was able to write a whole new take on a popular tale. I would recomend this book to anyone who enjoys unique fairy tale retellings.

Published by Thriftbooks.com User , 11 years ago
Poppy from PRINCESS OF THE MIDNIGHT BALL returns and, along with her unmarried sisters, is currently helping her father regain political alliances by participating in a royal exchange. Now she's living with her cousins, Lord and Lady Seadown, and their daughter, Marianne. She turns down invitations to balls because she refuses to dance after surviving the curse from her mother. Society soon frowns upon her absence, thus forcing Poppy to attend the balls. Instead of dancing, she joins the gentlemen and plays cards. She and Marianne become friends with the young royal prince staying with the King. When Prince Christian notices how different Poppy is from other girls, he's intrigued and happy to spend time with her. Some assume a marriage isn't far behind, but before anything transpires, a young, mysterious, beautiful woman enters the picture. Before long, all the men are falling in love with her and making absolute fools of themselves, while the women detest her. Poppy notices that something's not right. Could the magical protection she's wearing stop her from seeing an enchantment? Seeing clearly, she recognizes the mystery girl as a previously wealthy young lady fallen on hard times. Instead of dancing and enjoying frivolity, Ellen's now forced to become a maid. Can Poppy stop Ellen from making a terrible bargain with a creature who will demand something horrible in return? Just when Poppy thought she'd finished with evil, she must battle the Corley to save the lives of those she loves dearly. One can only hope that Jessica Day George will continue to write more about these charming sisters and their battles with magical, evil creatures. The friendship, sense of self, evil beings, drama, and romance make PRINCESS OF GLASS a must-read for lovers of fairytales and fantasy stories. Reviewed by: Jennifer Rummel
Copyright © 2020 Thriftbooks.com Terms of Use | Privacy Policy | Do Not Sell My Personal Information | Accessibility Statement
ThriftBooks® and the ThriftBooks® logo are registered trademarks of Thrift Books Global, LLC