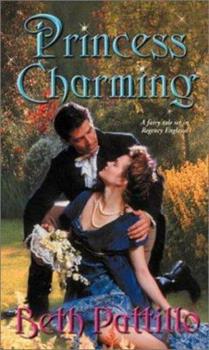 This description may be from another edition of this product. “. . . high on wit, tension, and passion. . .” - Romantic Times“Pattillo charms with a delightfully funny Regency tale . . .” - BookloonsA hero's work is never done.Haunted by his past, Nicholas St....

The Epitome of Romance Novels

Published by Thriftbooks.com User , 18 years ago
Princess Charming has it all. From damsel in distress to royalty in disguise. A great get away read!

A Charming Book of a Classic Tale...

Published by Thriftbooks.com User , 18 years ago
Beth Pattillo does a wonderful job of taking the concept of Cinderella and giving it more backbone and humor. Lucy Charming is the daughter of a Duke. But when her father dies of suspicious circumstances she is thrust into servitude under her stepmother and two step sisters...(okay so this sounds vaguely familiar)...However you find Lucy is not at odds with her position in the family, rather she embraces it so she can further her cause of reformation and the right to vote for ALL men regardless of status, just as her father had before her. And of course every Cinderella story needs a Prince. Nick, the crown prince of Santadorra has been living in England since the death of his Mother and has a somewhat polite relationship with his father. As a result of being so young and unable to prevent his mother's death that he develops this hero complex. He believes he must save any person with in his reach or power.It is on this premise that the book opens up with the two meeting. Lucy manages to knock Nick unconscious with the gate door as she tries to slip into the garden of her neighbor and get the men who are pursuing her off her tail. This meeting results in a sort of 'love at first sight' situation and some comedy of errors to follow as she mistakes him for a gardener and he mistakes her for a common maid.Neither character was super-human but very real and passionate. I liked how both Lucy and Nick had to struggle with their personal beliefs before they could ever make any true commitment to each other. And Yes Lucy was beautiful but in this book you felt her inner beauty far surpassed her physical beauty...and quite frankly it was the same with Nick... These two were so meant for each other, how could you not have a happy ending...?Beth I think your first book ROCKS! And I look forward to the next. You definitely have a very promising career ahead of you!

Published by Thriftbooks.com User , 18 years ago
In 1819, Crown Prince of Santadorra Nicholas St. Germain works as a gardener as payment of a bet he lost to his friend Lord Crispin Wellstone. Nick curses his canine companion Wellington for costing him the wager of not performing a heroic deed for twenty-four hours as he had to rescue the dog. When Wellington takes a leak on his shoes, an irate Nick gives chase. However, instead of catching his canine enemy, Nick runs face first into a door being opened by a maid. However, Lucinda Charming is not a servant as she is the daughter of the late Duke of Nottingham and stepdaughter to a nasty social climber.Lucy does not want Nick's involvement in her troubles, but he cannot help but intercede when two thugs accost her. Crispin sees the whole thing from his hiding place and realizes that neither aristocrat knows that the other is also part of the nobility. Unable to resist matchmaking, Crispin decides the hero and lady needing rescue are perfect for his machinations.This adult Regency version of Cinderella is an amusing historical due to the antics of the cast including a precocious pug. The humorous plot employs an undertone of serious issues debated between Lucy (women's suffrage) and Nick (the Locke monarchy contract). Beth Petrillo debuts with a wild, wacky, witty winner that hopefully will have a follow-up perhaps in 1850 Santadorra where women vote and the son of the this lead couple is a thirtyish prince.Harriet Klausner
Copyright © 2020 Thriftbooks.com Terms of Use | Privacy Policy | Do Not Sell My Personal Information | Accessibility Statement
ThriftBooks® and the ThriftBooks® logo are registered trademarks of Thrift Books Global, LLC