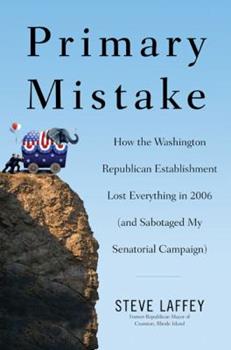 Primary Mistake: How the Washington Republican Establishment Lost Everything in 2006 (and Sabotaged My Senatorial Campaign)

"When I ran for reelection as the mayor of Cranston, there was an independent candidate running whose only claim to fame was that he wanted to keep a thirty-five-foot inflatable gorilla in his backyard. He was endearingly referred to as Gorilla Man. I never thought to say, 'Why is Gorilla Man running? 'When the debates were scheduled, I showed up and debated him along with the Democratic candidate. I never said, 'I won't debate Gorilla Man.' I never...

How the GOP nominated an incumbant liberal over a conservative Mayor

Published by Thriftbooks.com User , 14 years ago
Steve Laffey was the Mayor of Cranston, Rhode Island when he decided to run for the Senate in 2006. The problem was that the GOP already had an incumbent Senator in Lincoln Chaffee and their ironclad policy of supporting incumbents would not allow them to support Mr. Laffey. This book is Mr. Laffey's account of his experiences in becoming Mayor without the support of the local Republican Party and his campaign for the nomination against Senator Chaffee and the entire weight of the National Republican Senatorial Committee. So, why would Laffey run against an Republican incumbent? The Chaffee family is one of the original settlers of Rhode Island are treated in Rhode Island similarly to the way the Kennedys are treated in Massachussetts. However, the Chaffees tend to vote with the Democrats much more often than they have voted with the Republicans since the era of Ronald Reagan. Lincoln Chaffee took over the Seanate seat from his father John and carried on the family tradition of caucusing with the GOP when selecting leadership, but otherwise voting against most everything the GOP has stood for since Reagan. Laffey's positions, and he provides them side-by-side with Chaffee's, are fiscally traditional Reagan Republican conservative positions and somewhat socially conservative as well. His positions in this book are somewhat at odds with what you can find out about him on the Web, but do you believe what the author says he stands for or what others say about him? Whatever the case, the point is Laffey is clearly much more traditionally conservative and Republican than Chaffee. If you want proof of this, note that once Chaffe was defeated in his bid for re-election he left the GOP and became an "independent". Here is Chaffee's quote from Feb 14, 2008 endorsing Barack Obama for President, "I believe Senator Obama is the best candidate to restore American credibility, to restore our confidence to be moral and just, and to bring people together to solve the complex issues such as the economy, the environment and global stability.'' How many other Republicans have you heard endorsing either Hillary or Obama? What you will find stunning in this book is the kind of smear tactics the GOP used to defeat Laffey and benefit Chaffee. They used the exact words to go after Laffey as they do Democrats. They sound absurd to the ears and read very strangely, but there they are. Because he had worked in the private sector, they claimed that he couldn't stand up to the special interests such as oil companies. It sounds like Democrats! They dug up articles Laffey had written for his college newspaper to try and make him sound like a crank. And so much more. However, the people of Rhode Island finally had to face a choice: a Chaffee as a Democrat wearing a GOP hat, or a real brand-name Democrat. And they chose the real Democrat with 53% of the vote since there was no advantage to putting a mole into the GOP that was becoming a minority party o

Published by Thriftbooks.com User , 14 years ago
Being a resident of Steve Laffey's hometown of Cranston RI, I was able to observe the Laffey-Chafee primary in 2006 first hand. I was contacted at least a dozen times during the summer of 2006 by the Lincoln Chafee organization conducting the infamous "push polls" Mayor Laffey discusses in his book. And while I had never met Mayor Laffey and did not agree with him on a few of the issues I had made up my mind that despite the fact that he was somewhat of a long shot he was the right guy to be the next United States Senator from Rhode Island. You see Steve Laffey stood for something and his Republican primary opponent Lincoln Chafee did not. "Primary Mistake" is Steve Laffey's personal memoir of the 2006 Republican Senatorial primary here in little Rhode Island. You will be amazed at how the Republican establishment simply dismissed the Mayor and threw virtually all of the available resources to an incumbant U.S. Senator who many were predicting would leave the Republican party after the election win or lose. In "Primary Mistake" Steve Laffey details the three-pronged strategy that was employed by the Chafee campaign and the National Republican Senatorial Committee to defeat an upstart Mayor who dared run for a seat in the Senate that Mr. Chafee felt was his legacy. Early in the campaign the NRSC launched a series of personal attacks on Steve Laffey. This was virtually unheard of in Republican circles and violated one of Ronald Reagan's cardinal rules "Republicans should never launch personal attacks on other Republicans." Next, the Chafee campaign imported a cadre of out-of-state volunteers in a desperate effort to bolster it's sagging fortunes in the summer of 2006. As I indicated earlier I was contacted by the Chafee campaign almost every week during that summer and it was clear to me that the Chafee folks were extremely worried. The final piece of the Chafee strategy was to take advantage of a quirk in Rhode Island election law that allowed independents to vote in the Republican primary. It had become quite apparent that true blue Republican voters were heavily tilting towards Laffey. After all, he was right on this issues that mattered to most Republican voters. He opposed partial birth abortion and was against granting amnesty to illegal aliens. Laffey also thought that school vouchers were a good idea and was determined to do something about the expensive and wasteful pork-barrel projects that Congress had been doling out for years. Yes, if Lincoln Chafee was going to win this battle he would have to identify and encourage moderate and liberal independents to vote in the Republican primary. It was his only chance. Well, as we now know with the help of all those independent voters Lincoln Chafee would go on to win the Republican primary in a fairly close race. But Mr. Chafee's victory would be short-lived. In November Rhode Island voters elected liberal Democrat Sheldon Whitehouse as their next United States Senator. The National R

Published by Thriftbooks.com User , 14 years ago
Lincoln Chaffee has now officially left the Republican Party. The reality, of course, is that in his heart of hearts he left it a long time ago. He openly warned that this might be a possibility. George W. Bush goes out of his way to give everyone the benefit of the doubt. He sometimes even trusts those who obviously don't deserve it. Steve Laffey found out that his well-earned conservative credentials were not deemed sufficient to encourage the abandonment of the very left-wing incumbent. The GOP establishment treated him disgracefully. What happened to Laffey in the Rhode Island U.S. senatorial race ultimately angered conservatives throughout the United States. It is safe to assume that this contributed greatly to keeping many home on Election Day. One finds it impossible to disagree with Laffey's opinion that the Democrats didn't really win in 2006. No, "The Republicans lost." Steve Laffey particularly takes to task the country club Republican Elizabeth Dole. "Clearly, Liddy Dole's management of the NRSC was not that different from how the Republican-controlled Congress ran the country," asserts the author. No truer words were ever spoken. These so-called centrists feel uncomfortable around conservatives. And this is the irony of the situation. Laffey realizes that the majority of Americans prefer supporting candidates in the mold of Ronald Reagan. Everyone preparing for the 2008 elections should read Primary Mistake. The nation is in crisis. We are in an existential fight to the death against the Islamic totalitarians. The self-hating Americans who dominate the Democratic Party are not up to task. I also highly recommend that you read Norman Podhoretz's most recent work, World War IV: The Long Struggle Against Islamofascism.

Published by Thriftbooks.com User , 14 years ago
This is a must read for anyone interested in politics. This Laffey Guy has really hit it on the head. As they say in baseball, he knocked the cover off of the ball. As a Republican this is a really hard read in that the book provides "tough love". Reading this book is like taking a long look in the mirror. I have read a lot of political books, this one has a style all of its own, it is human and real. A must read.
Trustpilot
Copyright © 2022 Thriftbooks.com Terms of Use | Privacy Policy | Do Not Sell My Personal Information | Accessibility Statement
ThriftBooks® and the ThriftBooks® logo are registered trademarks of Thrift Books Global, LLC