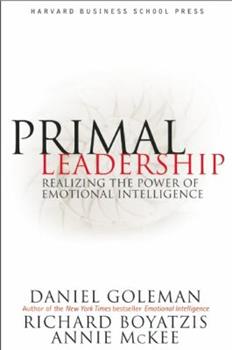 Looks at the role of emotional intelligence in leadership, discussing the characteristics of a good leader and leadership styles, and outlines the steps to becoming an effective leader.

Opens up another dimension for leadership

Published by Thriftbooks.com User , 18 years ago
Emotionally intelligent leaders connect with their people. This leadership quality speaks for itself, unites employees behind the leader's mission, encouraging them to be more productive. This book is uniquely valuable in that it explains the value of different types of repertoire -- visionary, coaching, affiliative, and democratic -- and when to apply them. Daniel Goleman should be applauded for restoring humanity into the workplace with his concept of Emotional Intelligence. Personally, I achieved emotional intelligence with a practical how-to book called "Optimal Thinking: How To Be Your Best Self." Optimal Thinking explains the message behind each emotion and provides the best questions to ask ourselves and others to obtain emotional resolution and optimal results.

Published by Thriftbooks.com User , 19 years ago
This book is unique because it recognizes the value of feeling good about ourselves in the workplace. The author is a courageous pioneer in this field. I also believe that personal leadership is the foundation for leading others, so I suggest that Optimal Thinking: How to Be Your Best Self to learn how to make the most of oneself and then bring out the best from others.

Published by Thriftbooks.com User , 20 years ago
First off, I really hate the title "Primal Leadership." I picture a gorilla beating the ground with a branch to show he's dominant, which isn't quite what this book is about. The authors use 'primal' to mean primary, as in first and most basic. The basic underpinning of great leadership is emotional intelligence."Primal Leadership" is written to help leaders become better leaders by improving their emotional intelligence. The book gives insight into the collective feeling of an organization, or its emotional climate, and how this is influenced by the people at the top of the organization and the leadership methods adopted by the organization.The authors identify four key aspects of personal competency in emotional intelligence:* Self-Awareness* Self-Management* Social Awareness* Relationship ManagementThe stronger a person is in these, the better leader he or she will become. Unless we are aware of our own emotions, we won't know how to control them. For example, if you make a unintentional, snide remark to an employee, because you're frustrated with the employee, the employee will probably not benefit, nor will the work environment. But, to prevent such a remark means you first must accept that you're feeling frustrated and, secondly, control that emotion.Being socially aware means that you understand the power structure of the organization and it means you have empathy. As an extreme case of lack of empathy, suppose an employee's wife just dumped him and you enter his office and say, "Hey, Jack. Won't ask about the wife. Ha, ha. Just kidding. But, I need that report today, so focus. Don't worry about your personal, little life." Obviously, that wouldn't go over too well! A great film of unmotivating leadership is "Office Space." The CEO is too funny. He walks around talking in monotone and he doesn't hear what the employees are saying. Again, an extreme case.A leader must understand the emotional state of his/her employees and take it into consideration. That doesn't, of course, mean you must agree or tolerate unacceptable behavior.After discussing these core competencies, the authors discuss different leadership styles, including:* Visionary* Coaching* Pacesetting* Democratic* CommandingThe authors argue that visionary, coaching, and democratic leadership styles are beneficial to an organization. But, many leaders rely upon the more tenuous pacesetting and commanding methods of leadership, which can backfire or be overdone. For example, a pacesetting, commanding leader often makes people feel irrelevant and stressed out. That makes them less effective and motivated.And, stress isn't good personally. Quoting the authors: "When stress is high and sustained, the brain reacts with sustained cortisol secretion, which actually hampers learning by killing off brain cells in the hippocampus that are essential for new learning." (Well that [stinks]!)However, there is hope for stressed-out leaders or followers. Quoting the authors again: "Human brains c

Hits The Nail On The Head

Published by Thriftbooks.com User , 20 years ago
I think Daniel Goleman's "Primal Leadership" hits the nail on the head when it talks about Emotional Intelligence and making those you are leading feel good. It sounds like a modern way of saying what philosophers throughout the ages have said, as even I as a professor learned from Norman Thomas Remick in "West Point: Character Leadership...", about "good-leaders" giving followers the "will" to follow. Goleman goes on in his book to talk about the practical, how-to, ways of imparting the emotional "will" to follow, as did Remick talk about the practical philosophy behind this important subject. I recommend first reading Goleman's "Primal Leadership", then going on to read the Remick book to build your knowledge.

Excellent, Though Missing One Important Thing

Published by Thriftbooks.com User , 20 years ago
"Primal Leadership" by Daniel Goleman is intellectually well done, from its presentation to its supporting examples. Though I agree with everything in the book, one important thing is missing that anyone really serious about all of this will absolutely need. That is, a basic philosophical understanding of the morals, ethics, and character required for GOOD leadership. I recommend the book "West Point: Character, Leadership,..." by Norman Thomas Remick for that.
Trustpilot
Copyright © 2022 Thriftbooks.com Terms of Use | Privacy Policy | Do Not Sell My Personal Information | Cookie Preferences | Accessibility Statement
ThriftBooks® and the ThriftBooks® logo are registered trademarks of Thrift Books Global, LLC