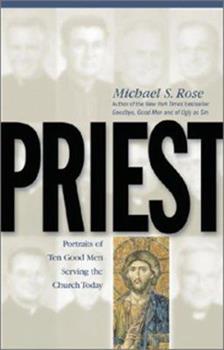 Contrary to media reports, priestly virtue continues to flourish in rectories across America. Although its ranks have thinned, there still remains a thriving priesthood of faithful men who are worthy of our support and who deserve our gratitude.

Hope After the Scandals

Published by Thriftbooks.com User , 15 years ago
This well-researched and thoughtful book is a real booster for people who were discouraged during scandals and the Long Lent of 2002. Michael Rose presents the stories of ten men living their vocations -- replete with that great holiness of the everyday, and the trials that shadow such devotion. I'm familiar with one of the profiled priests, and while he is a wonderful priest, he's also a reminder that everyday sanctity is possible to everyone who is true to his or her calling, whether that vocation is a religious one or not. Recommended book for Catholics -- or anyone else -- who needs a reminder that there are priests who live their vocations with humility and faithfulness.

Published by Thriftbooks.com User , 17 years ago
Rose writes an inspiring book, so much better than his "Goodbye, Good Men" about ten good priests today. The stories range from an army chaplain, a Russian missionary, and more. These priests are all good men, who are faithful and caring. These stories make one want to be a priest. A must read for all Catholics.

Published by Thriftbooks.com User , 17 years ago
Fr. Timothy Vaverek, one of the priests mentioned in this book is the pastor at my church. He really is as great as they say he is, but he is a very humble guy. Not many people at our parish know how amazing he really is. A lot of the things mentioned about him are not common knowledge around St. Joseph's, like I said he is very humble. I learned a lot about him by reading this book.

Michael Rose is one of the finest Catholic writers today

Published by Thriftbooks.com User , 18 years ago
I will keep this short. I think Michael Rose has put together one fine book. With the poputlarity of the "Conversion story" books (ie: "Surprised By Truth 1-3", "There We Stood, Here We Stand" etc.), this one rates right up there, and those individuals who liked those, they will like this one too.This follow-up by Mr. Rose to his blockbuster "Goodbye, Good Men" is just what the doctor ordered for Catholics to actually read the accounts of 10 rock-solid, orthodox Catholic priests who are serving Christ and His Church with love and conviction. It is a fine salve for the scourge of the Great Scandal of 2002.Well done. (For more of Michael Rose, check out his articles in the Catholic monthly New Oxford Review)

A timely reminder that the majority of priests are good men!

Published by Thriftbooks.com User , 18 years ago
Never before in the history of the Catholic Church has the role of the priest come under greater scrutiny and critique. Even faithful Catholics have fallen under the spells of the dissenters peddling bogus `solutions' like married clergy, an end to priestly celibacy, and women priests. Rather than resorting to `chapter and verse', Rose communicates the virtuous institution of the priesthood by telling the stories of ten faithful priests who are living examples of holiness, sacrifice, and love of God. In the process, Rose presents an enormously inspiring book that is easy to read and clearly communicates the fact that the Catholic Church is well outfitted with men of courage and conviction. In contrast to the cackling of the media and dissenters, Rose believes the problem is not with the institution of the priesthood. Rose writes, "the problem is more often than not a failure of young (priests) to hear and faithfully answer their calling; a failure of seminaries and bishops to form and educate their future priests properly; a failure of the ordained to focus on the duties of their state in life; and a failure of the laity to offer the proper spiritual and moral support for their pastoral leaders." In `Priest' you will meet Father Albert Lauer, who admits that he "did not receive God's fullest blessing because I stifled the Holy Spirit in my life." Lauer overcomes this with a devotion to Mary, and goes on to observe miraculous cures, conversions and holiness borne of his humble submission to God as a faithful priest. Father C. John McCloskey III began his priestly career in the pagan wilderness of Princeton University, and is now based in Washington DC. McCloskey is an intellectual giant who puts Christ's message into such a compelling form that he has converted hundreds to the faith, including the notorious abortionist Bernard Nathanson. Father Myron Effing has literally rebuilt the Catholic faith in Russia. Father Patrick Rohen served as a chaplain in Desert Storm. Father James Gould built a simple formula for achieving extraordinary vocations in Arlington, Virginia.One of the most incredible profiles is that of Father William Hinds and his ministry in drug and violence infested Cali, Columbia before taking over as pastor in a small Kentucky parish now well-known for its orthodoxy. Ministering to real people with painfully real problems, and doing so with grace and faith, is portrayed in the story of Father Timothy Vaverek. The story of Father James Mary Sullivan reveals the depth and innovation of the Dominican preaching order. Father Sullivan started Generation Christ to confront the secular Generation X mentality and nourish the spirituality of young Catholics. Father Paul Berschied founded a side walk counseling group called Helpers of God's Precious Infants. His story stresses the importance of obedience to God and the teachings of the Catholic Church. "A priest must remain united with the Church regarding her morals and her doctrines," he e
Copyright © 2022 Thriftbooks.com Terms of Use | Privacy Policy | Do Not Sell My Personal Information | Accessibility Statement
ThriftBooks® and the ThriftBooks® logo are registered trademarks of Thrift Books Global, LLC