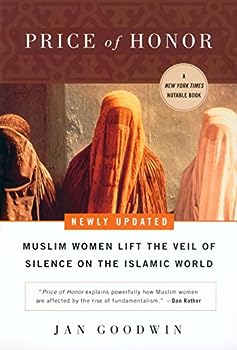 Price of Honor: Muslim Women Lift the Veil of Silence on the Islamic World

A NEW YORK TIMES NOTABLE BOOK "Explains powerfully how Muslim women are affected by the rise of fundamentalism."-- Dan Rather In recent years, the expanding movement of militant Islam has changed the... This description may be from another edition of this product.

A Rare Look into Closed Societies

Published by Thriftbooks.com User , 15 years ago
The timing of this re-issue of Jan Goodwin's seminal study of the lot of women under Islam could not be more timely. Just recently (02 March 2007) a Sunni fundamentalist group abducted 18 Iraqis in retaliation for the reported rape of a Sunni woman by Shi`a police. Nouri al-Maliki has "investigated" and has denied the allegations. He also has released a U.S. medical report supposedly concluding the assault never occurred. A nurse has testified to the contrary, however, stating that she had seen signs of an assualt upon examination of the alleged victim. Jan Goodwin documents that the practice of raping women in police custody is hardly new. In fact, it is but one of the indignities suffered by women living in Middle Eastern societies, and it is more common than one might think. To be clear, the problem does not appear to be Islam but rather the cultural and societal structures in the Middle East. Jan Goodwin clearly lays out the details, the result of multiple interviews in several countries. Her investigative journalism is invaluable in illuminating the plight of women in the region, a condition carefully and almost totally hidden from the rest of the world. For all who care about what is going on in the Middle East, and for all who care about the lot of women in Middle Eastern Muslim societies, this book is a must read.

Published by Thriftbooks.com User , 16 years ago
Having lived in the Middle East for over 20 years I was amazed at the author's accurate perception of the situation for women in this area. Not something that can be done without really understanding the people and culture. A great, intellectual, insighful read. Thank you Ms. Goodwin.

Published by Thriftbooks.com User , 18 years ago
I actually read this book before 9/11 and then re-read it after. It provides a perspective that no other medium has given because it details country by country the effects of Islamic life on women, some mainstream, some extreme but in all walks of life. It should be a must read for all Americans so they can wake up to worlds outside of ours....in this case knowledge is not only power, it's required for living!! Thank you Jan Goodwin.

Published by Thriftbooks.com User , 21 years ago
The Price of Honor is a journey through ten years of research on the life of Muslim women in ten different Middle Eastern countries.Jan Goodwin puts forth a very well written and well researched book, that has helped me gain some understanding of the culture of Muslim women under extremist Islamic rule.One can't help but feel the pain and misery that these women live and experience in today's day and age. This book may not speak for every Muslim woman, however, the fact still stands that most Americans treat their dogs better than women are treated under extreme Islamic rule.Great and thought provoking book!

A seamless and thought provoking study of Islamic life

Published by Thriftbooks.com User , 23 years ago
Jan Goodwin did something very difficult with this book. She is extremely fair and does an admirable job of not coloring the taste of this book with her own opinions. She cannot be accused of being judgmental. Goodwin did not write this book after only reading books or watching documentaries on the Middle East. She visited each country and talked personally with people there, whether they be private citizens, justices, queens, or those hunted by religous zealots. What disturbs me is other reviewers maligning America and American movies, yet not hesitating to be hypocritical when they themselves live in America. I guess it is alright to make harsh comments about the U.S. even though they derive benefits by living there. But at least America treasures real free speech and allows such comments to be made without the threat of a fatwa or at least a lengthy imprisonment. And that is what makes America a democracy: Goodwin can write this book, people can trash not just the book, but also America, and America will protect the rights of all concerned.
Trustpilot
Copyright © 2022 Thriftbooks.com Terms of Use | Privacy Policy | Do Not Sell My Personal Information | Cookie Preferences | Accessibility Statement
ThriftBooks® and the ThriftBooks® logo are registered trademarks of Thrift Books Global, LLC