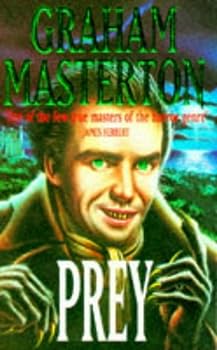 This description may be from another edition of this product. David Williams takes a job restoring a dilapidated Victorian orphanage on the Isle of Wight and discovers a secret that threatens the whole of human survival.

Wear a diaper, this is one scarry ride!

Published by Thriftbooks.com User , 15 years ago
This was my first Masterton book; I remember getting a copy of it in my language ( I'm Polish) from another fellow Polish student in 9th grade. That's all it took for me to be hooked on Graham forever, just this one book. That was ten years ago, now my bookshelf is crammed with Masterton, I pretty much bought everything he wrote, and let me tell you, there wasn't one book I haven't like, from what I read all ready. I treat his book like precious jewels, because he doesn't write that much, and hopefully he has new things coming out so I can immerse myself in him again. Prey was a fascinating read. This was beyond a haunted house story. I still remember vividly reading this into the wee hours of the night, sweaty, with matted hair over my head, not daring to turn the lights off and go to sleep. This story will suck you in, its scary, deep, well written, and its insanely entertaining! Briefly why I loved this book: We have two main characters, David and Danny who move in to the creepy Fortyfoot House on an Isle, far away from people and help, with scary noises in the attic, graveyard full of kids of suddenly all died and ghost nurse sightings, photos that change all the time, and a mystery that will knock your socks off in the end. This is a Horror with a heavy dose of adrenaline pumping terror, be ready to stay up with this baby a few nights in a row. Excellent, he's my favorite writer, and I don ever see that changing.

Other Worldly and Superb

Published by Thriftbooks.com User , 16 years ago
Masterton's Work has never been for all people. He has a style that brings the other world into reaching distance of this world. He creates works that lovers of the surreal side of horror enjoy. In many respects that is what his horror novels have in common, since none of them are consistently. As usual, Masterton creates a vivid first person narrative, and shows the person a picture of a dark and foreboding place in the other side of the world of "reality". I have never been disappointed by a Masterton Horror novel, and whilst I also wonder why he has not received more wider acclaim than he has, it is very evident that he has influenced the film world of horror either implicitly, or explicitly. I sometimes suspect maybe that he has done a script under a Nom De Plume, especially since Masterton's Books have appeared under the names of "other authors". PREY is a rather vivid example of Masterton's many books that I have seen all too many times. He can paint a brilliant picture of a lush, beautiful island, as well as the house in the book, and then push us " through the looking glass" to the other side, and in many ways, have the other side come slithering into our world. Very few writers create the kind of atmosphere that Masterton can, and yet, when he does , the "elite" horror fans continue to pan his work in the worst possible way. Overall, with Masterton's works, I would much prefer to buy hardback copies of Masterton's material, and on occasion I have, but they are mostly in the rather short lived "trade paperbacks" which have enough acid to cause them to give the book the PH level of a Kitty Litter tray.

The Return of Brown Jenkin

Published by Thriftbooks.com User , 20 years ago
David Williams is not having a good year. His wife leaves him and his son, Daniel, for another man, taking most of his money in the process. In his emotional distraction he loses his business. It is only by happenstance that he finds a position restoring Fortyfoot House, a century old deserted orphanage. No sooner does he settle in but he starts hearing spooky scratching and rustling in the attic. And he sees ghostly presences in the garden and bedroom.The only good news in David's life is the appearance of Elizabeth, an attractive college student, who moves in while on a summer job. She helps with the cooking and provides needed companionship. As David investigates the strange goings on about Fortyfoot House he discovers that the strange noises and lights are blamed by the villagers on a strange rat-like creature called Brown Jenkin. He is associated with the original owners of the house. In 1886 a terrible disease struck the orphanage and all the children died. In some fashion Brown Jenkin had something to do with the deaths. Soon the haunting turns into killing, as first a rat killer, and then a neighbor, are horribly slaughtered. David discovers that the house isn't quite where it appears to be. The horror builds until the lives of both Daniel and Liz are threatened and David is drawn into an insane ritual that promises the end of the world. David must face inhuman evil if he wishes to end the nightmare.Graham Masterton, less known that writers like King, Straub and Koontz, is still one of our best contemporary horror writers. "Prey," written in 1992, is something of a tour-de-force. Masterton makes use of both legends and occult mythology to craft a tale that draws the reader in and keeps him or her reading to the very end. Masterton has the ability to build the horror of a scene so that is has real impact. His narrative flows naturally and his use of internal dialog contributes to the dark atmosphere. "Prey" is a classic of top-notch spookiness.

Masterton Does It Again!

Published by Thriftbooks.com User , 21 years ago
David Williams with his young son Danny move into Fortyfoot House, a run down 19th century orphanage in Bonchurch to restore it. He hears scuffling and scratching in the walls and attic that could be a rat and in reality is more like a rat monstrosity. Locally the town has a history of children who disappear, never to be seen again. They are taken where the clock can't find them, taken by this rat/boy creature, Brown Jenkin. He starts to see spirits of people long dead, yet are not dead. He learns the history of the house, which is still happening yesterday, now and tomorrow. The house not only has a sinister past, but an equally sinister present and future. This time travel tale is unsettling, and engrossing. It's an uneasy read. I cannot stress to you enough just how good Masterton is, and if you can only pick up one or two books at a time, let this be on your list.

IT IS A BOOK FOR PEOPLE WHO THINK THEY CANNOT BE SCARED.

Published by Thriftbooks.com User , 22 years ago
A HORROR BOOK CANNOT GET BETTER THAN THIS;G.M HAS A WAY WITH WORDS TO SCARE THE BEJEE'S OUT OF YOU. HIS STYLE , PROSE AND CHARACTERS ARE ALWAYS REFRESHING , ENTERTAINING AND NEVER LACKS TO GRASP YOUR ATTENTION AND INTREST. ANY LADIES THINKING G.M IS A GREAT AUTHOR WRITE TO ME VIA E-MAIL.
Copyright © 2020 Thriftbooks.com Terms of Use | Privacy Policy | Do Not Sell My Personal Information | Accessibility Statement
ThriftBooks® and the ThriftBooks® logo are registered trademarks of Thrift Books Global, LLC