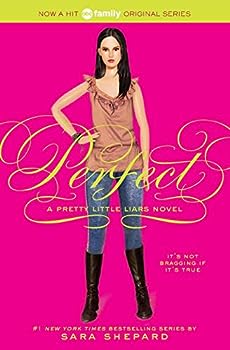 Published by Thriftbooks.com User , 14 years ago
The third book in this awesome series by Sara Shepard is the best yet. As soon as we think everything is getting better, it all comes crashing down in a wave of confusion and betrayal. And A is behind it all. She knows everyone's secrets, and she'll use them to get what she wants. Spencer, Emily, Aria, and Hanna have nothing to do but watch their lives fall apart around them. But now they know who Ali's killer is. Or do they?

The 'Perfect' blend of mystery and scandal

Published by Thriftbooks.com User , 14 years ago
There was a time, back in the seventh grade, when Alison "Ali" DiLaurentis, Hanna Marin, Spencer Hastings, Aria Montgomery, and Emily Fields ruled Rosewood Day school. Together, these five girls determined what, and who, was hot, and what, and who, were so yesterday. They were the girls everyone wanted to be - especially Ali - and the ones every guy wanted to date. Even Hanna, Spencer, Aria, and Emily felt jealousy towards the perfect Ali. Still, the five girls spent every waking moment together, trading secrets, gossiping about their classmates, and hanging at the mall where they shopped 'til they dropped, their parents credit cards in tow. But then, everything changed. At the end of seventh grade, Ali suddenly up and disappeared without a trace, and each of the girls slowly went their own ways. That is, until "A" came into the picture, threatening to reveal each of their deepest, darkest secrets; and an unlikely discovery was made, that of Ali's body, buried under the cement in her old backyard. Suddenly, it became evident, that secrets don't always stay buried. After Ali disappeared, Hanna Marin dropped Spencer, Aria, and Emily, and picked up a new friend in the dorky Mona Vanderwaal. Together, they vowed to drop the extra weight, and become the most beautiful girls in school. Now, at the age of sixteen, they have both accomplished just that. But they want more. With Mona's Sweet Seventeen quickly approaching, there's no doubt in their minds that this won't be the bash of the century. But thanks to "A," there's trouble a-brewing between the two besties. Trouble that could set them at odds with each other forever. Spencer Hastings knew that it was wrong to steal her sister, Melissa's, essay for economics class. But it was so perfect, and there's no harm in a little fib now and then. Unfortunately, the essay has been entered into the Golden Orchid competition, throwing Spencer into the midst of semi-fame. Spencer just wants to ignore the congratulations surrounding her, but "A" is making that difficult with the constant threats of revealing her wrong-doing. Emily Fields knows that being gay would make her family hate her for life. She also knows that, if she doesn't report "A" to the police, she, or one of her old friends, could end up dead. She just never realized that coming forward with information would make her the target of "outing" her to the whole town. Aria Montgomery thought that her troubles were over when her family moved to Iceland for three years. But, upon return, her father, Byron, continued the affair he had left behind with his student, Meredith; and, due to the fact that Aria knew all about it, her mother wants nothing to do with her. Luckily, she has Ezra to run to. Unfortunately, with "A" around, he may not be able to claim the title as her "knight in shining armor" for much longer. As if dealing with "A" weren't enough, of course, there's some peeping tom-like nutcase running around the pretentious Philadelphia town of Ros

Published by Thriftbooks.com User , 14 years ago
it's difficult to write this review without making any spoilers. i will just say, please read books 1 and 2 first, in order, because if you don't, you will miss out on what's going on and all the interpersonal relationships/drama between the characters. And let me just say, there is LOTS OF JUICY DRAMA in this book!!! All 4 of the girls have really good scenes, I like how Sara Sheppard doesn't play favorites and gives proper attention to all her characters so that it's mot like you're skimming past the filler chapters of the 3 other characters to get to the chapter with the character that actually matters, in Pretty Little Liars, there are no filler chapters and all the characters matter! *** TEENY TINY SEMI-SPOILER *** In this book we MAYBE find out who Ali's killer possibly might be, but we aren't sure because as it turns out.......... LOL I'm not gonna tell you! go read the book!!!

Published by Thriftbooks.com User , 14 years ago
This book fell nicely into the series. The girls just keep stacking up the secrets and A just keeps knocking them down. Read the whole seires its a good read.

Published by Thriftbooks.com User , 14 years ago
The third Pretty Little Liars is shocking. Practically every part will stun you. A is even more sneaky and evil in this book- and has several mistakes, and flops, up her sleeve. Hanna, Aria, Spencer, and Emily really begin to see who A really is. The mystery surrounding Ali's actions before her death are slowly being revealed as is her killer. This is typical, wonderful PLL, but even better. The girls are even more real in this book. It's hard to put into words how much I really loved this book without telling what happened!!!! It still seems a little early to yell about everything that happened, and everything that A did to all of them!!!! We've been warned for two books what might happen if the girls didn't do what A said. In Perfect, we find out exactly what she has in store for all them. Can Emily and Maya's secret be kept safely in the closet? Can Spencer recall the night Ali disappeared in full detail? What about Aria and Ezra? The mystery of A is not solved, but something else very important is. Some people have said the books have no depth to them, but I don't understand how anyone can say that anymore after Perfect. Perfect is incredibly suspenseful, and if you're prone to paranoia, be warned. Your curtains and blinds are going to bo closed for a while.
Copyright © 2020 Thriftbooks.com Terms of Use | Privacy Policy | Do Not Sell My Personal Information | Accessibility Statement
ThriftBooks® and the ThriftBooks® logo are registered trademarks of Thrift Books Global, LLC