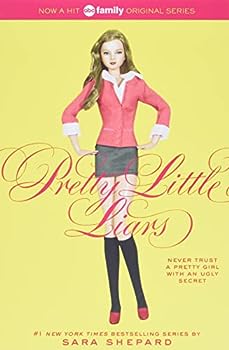 Published by Barb , 1 month ago
Book was in perfect condition!

Not The Right Book

Published by Courtney , 2 years ago
I ordered this book because i needed the 1st book in this series - turns out it is the second novel in the series, "Flawless" but with the "Pretty Little Liars" book 1 cover so that's cool...

Published by Callie B , 3 years ago
I watched the tv series of these books and now I’m reading them. They’re for a younger age group (young adult) but I still find them interesting!

Published by Thriftbooks.com User , 14 years ago
Pretty Little Liars HarperCollins Publisher, 2006, 286 pp., $8.99 Sara Shepard ISBN 978-0-06-0887320-2 Ever receive a message from someone, have no idea who sent it, then find out they had the wrong number? Hannah Marin, Spencer Hastings, Aria Montgomery, and Emily Fields wish that was the case, but unfortunately, it's not. For them they are receiving messages from someone named "A," but it's not the wrong number. Know how they can tell? "A" is reminding them of all the secrets they try so hard to hide. Most of these secrets have been ones their former best friends, Ali DiLaurentis, knew. But Ali is dead, right? Hannah, Spencer, Aria, Emily, and Ali were best friends; they have been since the summer before seventh grade when all of their parents volunteered them to work Saturday afternoons at Rosewood Day School's charity drive (except Spencer who volunteered herself.) The girls quickly bonded and soon became best friends. At the end of seventh grade everything was going great for all of them; they were just about to have their end-of-the-school sleepover. But when Spencer and Ali get into a fight, suddenly things take a turn for the worse. Ali leaves and doesn't return. By the next evening the police are called, and Ali is reported missing. The girls all appear worried, but secretly they are all relived. Ali knew all of their secrets. The things you never want to get out. The life changing secrets. And if Ali is dead, then she can't tell anyone, right? Wrong! Three years later, the girls are getting text messages from "A" -and "A" knows everything, and is taking ever chance to make these girls paranoid and scared. Every creak, every sound, makes these girls jump, wondering if "A's" around; because "A" would have to be to know not only all their seventh grade secrets but their new secrets too. Who is "A"? Where's Ali? Is she dead or just missing? Is "A" Ali? Is "A" Ali's murderer? Is "A" going to tell everyone their secrets? These are the questions running though each of the girl's minds. Read the exciting series: Pretty Little Liars, Flawless, Perfect, and Unbelievable (coming out May 27, 2008) to figure out all these questions. After Unbelievable, Shepard plans on writing four novels. Pretty Little Liars is one of the best books I've read; it's breathtaking -- the things these girls will do or how far "A" is willing to go. The book will leave you sitting on the edge of your seat and is unbelievably hard to put down. Pretty Little Liars was inspired by Shepard's upbringing in Philadelphia's main line. -Lindsay Wowkowych, 13 Rush-Henrietta, NY Roth Middle School

Published by Thriftbooks.com User , 15 years ago
I did enjoy this book- very much. It's more grown-up than anything. The story arc is extending through the series. I can't wait to see what happens to the girls. Sara Sheperd has created an entire world of Rosewood, PA. The characters flow very well. Each girl has a secret she's trying desperately to hide, and somebody named A seems to know about all about each of them. There's a high level of disfunction in each girl's family. Emily's real problem is parents who don't accept her very well and are trying to force her into mold of who they want her to be. If they did, I think her sexual idenity issues would be a lot easier to handle. Then, there's Aria- she's got the weight of the world on her shoulders- her true story arc is that she's covering up for an ugly family secret that could tear her family apart. Hanna is probably the most self-destructive of all the girls in the book- she's a klepto and she's eating disordered- and despite getting caught, her mother doesn't deal with it like a normal mother should, and tries to get her off the hook instead of making her deal with it. Plus, Hanna's single father has replaced her, sending her sense of self-esteem spiralling down, affecting all the relationships in her life. Spencer's hot-and-heavy affair with her sister's boyfriend turns ugly when it gets exposed to her family. They come down on her, instead of Wren for taking advantage of her (he must be, like 23!!!), and side with her sister. That storyline broke my heart. Spencer wasn't really a bad girl- just trying too hard to be perfect and her parents didn't appreciate that. The biggest secret they're all keeping is The Jenna Thing. What is The Jenna Thing? Well, you'll just have to read Flawless to fidn out!!

you won't want to put this one down!!!

Published by Thriftbooks.com User , 15 years ago
Okay, I found out about this book from one of my freshmen. She brought it in one day and asked me if I could please read it, because she absolutely LOVED the book and needed someone to talk to about it....and said that her friends weren't really "into reading." I took the book home, thinking that I'd get around to it later.....maybe next week. Maybe not. I was wrong. I started reading when I got home and couldn't put the book down. You won't want to put it down either. It really IS that good. Other reviews have basically told the story here: five friends are bound by a secret, referred to as "the Jenna thing," until one of the girls, Alison, goes missing at the end of their seventh grade year. Skip ahead to eleventh grade, when the remaining four girls begin receiving alarming text messages. It's a mystery that grabs you and won't let go. I've seen several copies of this book (and #2 Flawless) floating around our school lately, thanks to word of mouth advertising. I'm 30something and LOVED the book...my students are 14-18 years old and also love it. Friendship, mystery, boys, all of the big topics pop up in this book. Grab a copy and get hooked!

an amazing book for teens

Published by Thriftbooks.com User , 15 years ago
In Pretty Little Liars, the first book in the series, we begin three years ago on the evening of Alison DeLaurentis' disappearance from a sleepover with her four best friends. We are then launched into the not-so-pretty present in which Ali is still missing, her four best friends barely even acknowledge each other, and their lives are falling apart. Spencer struggles to stand out in her family, while Aria is trying to keep her family together and maintain an unlikely romance. Emily is trying to figure out how she feels about everyone, more specifically the new girl at school, and Hanna is facing difficulties with her boyfriend, the law, and remaining as goreous as she's become. But all four girls are facing one major problem: someone who goes by the initial A is threatening to tell their secrets and ruin them for good. My favorite part occured whenever the girls recieved threats from A and had flashbacks. Everytime, you get a little more insight as to why the girls have become who they are and what they're trying to hide from everybody. You also want more clues as to who this mysterious A is, and why they are so intent on destroying everyone's image of Spencer, Aria, Emily, and Hanna. The whole time I was reading Pretty Little Liars, I couldn't put it down. Each girl has a totally different personality, ranging from preppy Spencer to athletic Emily.All four girls have a different take on their relationship with Ali and what happened to her. The diversity of the girls makes the book all the more interesting, and everyone can relate to at least one girl, if not all of them. Pretty Little Liars was fantastic, and I recommend it to any teenage girl

Published by Thriftbooks.com User , 16 years ago
Alison, Emma, Spencer, Aria, and Hanna were once the best of friends back in the summer between seventh and eighth grade. They held private sleepovers, passed notes in homeroom, and shared their darkest secrets. Then a tragic incident shook the safe, suburban town of Rosewood: Alison vanished without a trace. Now years later, Alison still hasn't been found and the other girls are now in the eleventh grade, but are no longer friends. Emma is the sporty teen, obedient, and every parents' dream daughter. Aria is back from Iceland, more mysterious and prettier than ever. Chubby Hanna has lost the weight and has transformed herself into a sexy "It Girl," while Spencer is a smart and preppy overachiever. Perfect lives, huh? Almost. When strange, threatening messages began appearing from a mysterious "A", the girls must face their past and the dark secrets they thought they had buried forever. PRETTY LITTLE LIARS is an eerie novel that gave me the chills with every chapter. Well-written and full of suspense, I'm sure it will attract many readers and also make a popular television show. With a cliffhanger ending, I definitely cannot wait for the sequel (Pretty Little Liars #2: Flawless (Pretty Little Liars))! Reviewed by: Safia Abdul
Trustpilot
Copyright © 2022 Thriftbooks.com Terms of Use | Privacy Policy | Do Not Sell My Personal Information | Cookie Preferences | Accessibility Statement
ThriftBooks® and the ThriftBooks® logo are registered trademarks of Thrift Books Global, LLC