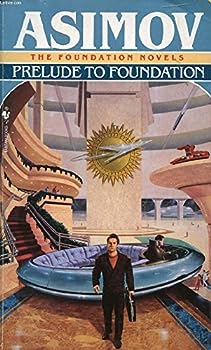 (Part of the Foundation Universe (#11) Series and Foundation (#1) Series)

This description may be from another edition of this product. This daring story of humanity's future introduces one of the great masterworks of science fiction: the Foundation novels of Isaac Asimov. Unsurpassed for their unique blend of nonstop action, bold...

Published by Thriftbooks.com User , 19 years ago
Prelude to Foundation is chronologically the first novel in Asimov's Foundation series. Hari Seldon has just introduced his theory of psychohistory to the public on Trantor and is now sought after for his potential to one day mathematically predict the future. In this book we learn much about the Imperial home planet of Trantor and the time period of the beginning of the Empire's decline. I haven't yet read the rest of the Foundation series but I'm looking forward to it, the more so after this enjoyable start.Since Prelude was written many years after the original Foundation trilogy, Asimov chose to tie in a few plot elements from the four-book Robot series and the old Empire trilogy. In fact, a major character from the Robot series also shows up here in a marvelous twist at the end of the book! Having recently read both the Robot and Empire series, I feel that Asimov did a wonderful job considering that something like 20,000 years have passed since the time setting of the Robot series. I highly recommend reading the Robot novels before you start Prelude.Prelude describes "The Flight" period of Seldon's life during which he was hiding from the Emperor Cleon I to prevent psychohistory from falling into the wrong hands (or so he thinks). This book is quite difficult to put down and the 400+ pages flew by for me in less than two weeks, which is unusual given how much time I usually devote to sci-fi. The ending has a couple great surprises in store for you, just make sure you don't peek!

Published by Thriftbooks.com User , 21 years ago
This is the first Foundation-novel I read. After finishing it, I immediately went to the bookstore to buy 10 other Asimovs, which should say enough.. . . The galaxy sketched by Asimov is so colorfull and realistic, one is driven to read the entire book at once. Each department of Trantor has its own characteristics, just like each culture on our tiny 'Aurora'. The problems created by these differences are parallel to 'ours' as well. As I recognised the Big Galactic Problems Asimov adresses in this book in our modern society, I was curious to see the development of the special solution Hari Seldon tried to find for them. You can recognise the scientist in Asimov, when Hari Seldon is asking himself questions about the development of his psychohistory. I was very curious about the answers lined out in the following novels. Furthermore, I was fascinated with the idea of our Earth transformed into a mere legend, and the unexplainable 'Easterns' and 'Westerns' spread into the vast galaxy. Last but not least, the plot was very surprising. Asimov tricked me into some wrong ideas the entire novel. I am reading 'Foundation and Empire' now, and I'm still totally obsessed with it, so I recommend this series to everyone who likes SF-novels as well as social sciences.

Published by Thriftbooks.com User , 21 years ago
Although it may be helpful to read the Foundation Trilogy and perhaps Foundation's Edge and Foundation and Earth before this prelude-and Forward the Foundation-this is an excellent read in whatever order you read it. The series is fantastic, and this prelude-which chornicles how Hari Seldon was introduced to psychohistory and the principal, early developments he made during the period of The Flight. It also introduces many of the important characters that later play a greater part in Forward the Foundation. The novel is very suspenseful indeed, and is notably fast-paced, which is a pleasant surprise from Asimov. There is a lot to look forward to, including several glimpses at the Galactic Empire while it still had the appearence of grandness, robots and the search for information about Earth, and two interesting surprises in the end, which involve a reunion with an old friend, if you have read another series by Asimov. This book is definitely as good as, if not better than, the three novels of the Foundation Triolgy. Read it!

Published by Thriftbooks.com User , 21 years ago
After I finished reading Foundation and Earth and realized the future of humanity and the galaxy, I was VERY intersted to read about Hari Seldon and how psychohistory played a roll in Daneel's dated plans for humanity.Asimov, once again, did not fail in painting a very different picture of the human, Hari Seldon. I was very used to hearing him refered to has a wise, wonderful, intelligent, caring old man. But the reality is, he was horribly normal in his personality, something I found fascinating.I also find interesting how the people of the Foundation only really acknowledge Seldon for psychohistory, whereas, the reality was that there were hundreds of people who worked on it, and on top of that, most of the progressive breakthoughs in making psychohistory a reality were not done by Seldon himself, but by someone who history choose to forget.It is also interesting to see the fall of the Empire before Seldon and how quickly things fell apart.To fully understand Foundation, you must really understand the character of Hari Seldon, and thus, you must read this book. Enjoy!

The beginning book of the famous Foundation series.

Published by Thriftbooks.com User , 22 years ago
In 1988, Asimov published a prequel to his famous Foundation series. He also uses this book to continue to tie in other novels that he had already written, most notably all of the robot stories, particularly involving R. Daneel Olivaw and Lije Baley, as well as "Pebble in the Sky" (1950) (in fact, in such a larger scheme, "Prelude to Foundation" follows "Pebble in the Sky" and precedes "Forward the Foundation" (1993)). In this novel, he finally uses Hari Seldon as a main character. A young assistant professor of mathematics, Hari Seldon, travels to the planet Trantor (the governing planet of the galactic empire) to present a paper at a convention on a new field he has begun referred to as psychohistory. In his paper, Seldon suggests that it might be theoretically possible to develop mathematical equations and techniques of analyses to predict, with strong statistical analysis, future events of human history on a broad scale (in which the discipline only is applicable to extremely large numbers of people). Asimov provides some hints that this field might use chaos theory as well, although he never uses that term. Seldon also believes that, while theoretically possible, it isn't practical. There are those, however, who believe that the galactic empire is collapsing and hope to use a developed psychohistory theory to help direct human society. Seldon finds himself running from the Emperor's agents and hiding in various different enclaves throughout the planet Trantor, and thus learning more and more about Trantor (those reviewers who criticize this trek are obviously missing its importance in the greater scheme of the series). He is attempting to find a smaller model of galactic populations that would allow him the ability to develop his theory. There are legends that tens of thousands of years ago, man had lived on only one planet: Earth. He is hoping to find some historical evidence for Earth and, in so doing, he discovers some surprising facts and events. I am probably unusual in that I enjoyed this book the most in the series. Perhaps its because I also live in an academic environment and see many similarities to Hari's problems. Asimov was obviously drawing on his own experiences.
Copyright © 2020 Thriftbooks.com Terms of Use | Privacy Policy | Do Not Sell My Personal Information | Accessibility Statement
ThriftBooks® and the ThriftBooks® logo are registered trademarks of Thrift Books Global, LLC