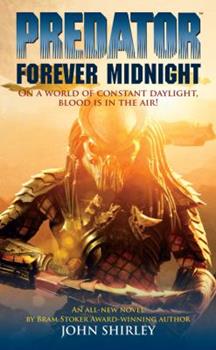 (Part of the Predator Series)

The year is 2117 A.D. Humanity has seized the stars, using reverse-engineered alien technology to explore the far reaches of space. For a hundred years, the Predators, sadistic extraterrestrial hunters, have been a dim memory. Cast in daylight for years at a time, the almost eternally lit jungle planet known as Midnight is the home to more than a thousand colonists, explorers building a haven on a new world. But the settlers aren't alone. The Predators...

Published by Bookworm , 3 months ago
Fantastic read! Amazing writing! Fascinating, Disturbing, Funny. Writer creates planet full of wonder, creatures and plants that will blow your mind. Story keeps you guessing and surprising . Feel like you are right there on the planet so full of incredible alien life exploring it.

Published by Thriftbooks.com User , 14 years ago
a have only read half the book. but i can say i Love IT. written by a classic Bram Stroker Horror Writer. the truth is this is a true monster book.

Great book in a silly series

Published by Thriftbooks.com User , 14 years ago
I think this book and the Darkhorse comics are the only things in the entire Predator franchise worth spending time on. The comic dorks that complain about the names of the race need to discover women. They're far more interesting than making a fool of yourself by whining and crying that an author didn't check the fanboy manual so he could avoid implanting sand in the collective vagina of a dozen virgins that live in their mom's basements.

Published by Thriftbooks.com User , 15 years ago
This book puts a whole new spin on the predators gender, but it is very imaginative book with a good enough story. It is only seven dollars, and it will provide a lot of entertainment over a course of at least two days.

Published by Thriftbooks.com User , 15 years ago
This book delivered so well, it gave me goosebumps at the end. I don't wish to spoil this reading experience for anyone, so I'll just say that this is what true action-adventure science fiction is meant to be! Right from chapter one I was enthralled with the descriptive power wielded by the author. John Shirley's prose is such that it will transport you instantly to the Predator's "game preserve" world of Midnight, with its lush and vibrant ecology. This tie-in novel is the real thing, peeps. For those purists who were taken somewhat aback by what they consider to be inconsistencies within the Predator's universe, all I have to say is, I feel sorry your suspension of disbelief isn't in fine working order, because y'all missed out on one of the most gripping & satisfying sci-fi narratives I've had the pleasure of reading in a long while. It brought me right back to the days when I was a young lad caught up breathlessly reading the likes of Edgar Rice Burroughs' John Carter, Warlord of Mars books. And that is just about the highest compliment I could pay. Get yourself a copy of this highly entertaining novel, leave your baggage at the door (but bring along your brains - this is smart stuff, here), and enjoy the ride. There is excellent characterization and alien species interactions that should bring smiles to the faces of the most jaded. I was going to give this one 4 and a half stars because I thought it couldn't be compared against other more "serious" classics, but I reconsidered and gave it 5 stars simply because in the context which it is written, it fully delivers the goods. Rock on John Shirley !

Published by Thriftbooks.com User , 15 years ago
I am not an avid book reader, nor do I read on a regular basis. I find a lot of books lack the components that make a film so great...intriguing stories and subplots, investments into the characters of that story and great action. Most books have lags in the story which are more "filler" parts to keep the story at a reasonable length. From John Shirley (Co-writer of "The Crow") comes a new Predator novel which is in my opinion the ultimate Predator novel! The best ever written! Through John Shirley's imagination, we learn the background of the Predators and their customs, we are introduced into an alien world unlike any, and we also are given an outstanding dose of non-stop action that presents itself very cinematically. I found myself creating shots and angles and music in my head as I was reading! The characters are intriguing and the three separate stories that we embark on all tie in from the perspective of the Predators, to the perspective of a Colony, to the perspective of a commander of a marine protection unit. This book offers all the punch! For once a Predator novel that gets right down and to the point and SERIOUS, unlike past entries in the series' which seemed to give the stories a more "comic book" type feel. Unlike those types of novels, Predator: Forever Midnight is an insanely gruesome and fantastic sci-fi action/adventure thrill ride that will have you through 20 pages in less than a minute! The writer clearly understands the Predator and the series and knows the fanbase as the story is very mature and involved but as easy for anyone of any age group to read and understand. Hopefully John Shirley will continue to produce more Predator novels! By far the best of them all!! I HIGHLY recommend it!!
Copyright © 2020 Thriftbooks.com Terms of Use | Privacy Policy | Do Not Sell My Personal Information | Accessibility Statement
ThriftBooks® and the ThriftBooks® logo are registered trademarks of Thrift Books Global, LLC