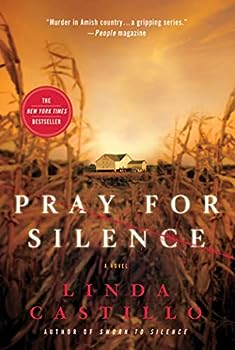 (Book #2 in the Kate Burkholder Series)

This description may be from another edition of this product. One family. One horrific murder. An entire town under suspicion... The Planks moved from Lancaster County Pennsylvania to the small Amish community of Painters Mill, hoping to resume the comforts of...

Published by Rosemary , 2 years ago
Very good book. From page one you get caught up in the story. Ms. Castillo never lets the reader down. This is my fifth book by her, and I pass them on only so someone else can share in them ! They are worth re-reading .

Published by Thriftbooks.com User , 3 years ago
I thought book 1 was amazing. Pray for silence got me hooked halfway into chapter 1. I couldn't put it down. So many twists. You get so entwined with the book, your adrenaline starts to rush when Kate's does. Definite must read!

Published by Thriftbooks.com User , 11 years ago
I knew when I read Sworn to Silence by Linda Castillo that her mystery series was going to be one that I looked forward to reading, waiting anxiously for the next installment. This summer Pray for Silence, the second book in Castillo's series, was published, and after devouring it in just a day, I can attest to this book's appeal. I loved this mystery, despite the fact that the details were grisly. Chief Kate Burkholder must investigate the massacre and torture of an entire Amish family - all seven members. Because Kate grew up Amish she is unable to accept the initial scenario: that the father killed his wife and children and then killed himself. Eventually, evidence leads Kate to investigate further, and in typical mystery fashion, there is more to the story than originally meets the eye. The story centers around Mary, the fifteen year old daughter who is beginning to be influenced by the outside world, experiencing her first love, and wanting to leave the Amish community. Pray for Silence takes place not quite a year after the first mystery Kate was involved in. She is still seeing Tomasetti, a state agent, who is grieving the murder of his wife and two young daughters two and a half years ago. Their relationship is characterized by a lot of baggage they each bring with them. And while it seems the odds are stacked against them having a lasting relationship, I keep rooting for this pair. While this is only the second in this series, I enjoyed the familiarity already established with Kate and the supporting characters in this book, learning even more about the members of the Millers Kill police department and in the community. I will be watching for Castillo's next Kate Burkholder mystery, ancious to see how this series develops.

Don't read this at bedtime!

Published by Thriftbooks.com User , 11 years ago
Wow. Wow. Wow! A real 'edge of your seat' 2nd novel from Ms. Costillo! I can't wait for #3 to make it's appearance! Keep it up....you have fans for sure! For some....could be a "bit" gory with all the details BUT this is important to get the horror, the real "feel" of what the victims went through. And what the investigators witnessed! Without the gore....it wouldn't be what holds you to the story. A g*r*e*a*t* read. Thank you Linda!

Pray For Silence By Linda Castillo

Published by Thriftbooks.com User , 11 years ago
Police Chief Kate Burkholder is tested to her limits when a horrific crime takes place in the small town of Painters Mill, Ohio. An entire Amish family is brutally murdered leaving little evidence and no plausible explanation or motive for the crime. To solve the gruesome act, Kate determines to uses every resource available to her, including those obtainable by on-again off-again paramour, State Agent John Tomasetti, who unbeknownst to her has been put on a mandatory leave of absence. Resurrecting painful parallels to her past, Kate can't help but become personally invested in the case, and as she races against time to capture the killer, a horrendous and unspeakably twisted plot emerges that will change the town of Painters Mill and those who live in it forever. Disturbing and intense, Pray For Silence is a thrilling fast-paced crime novel that will keep you on the edge of your seat from start to finish. Pray For Silence is Castillo's second novel in this series featuring Chief of Police Kate Burkholder. I highly recommend these potent novels for crime thriller lovers who can handle the graphic visuals and unsettling psychological impact the material evokes.

Published by Thriftbooks.com User , 11 years ago
Reminiscent of the much-loved Holly Barker series by Stuart Woods, Linda Castillo takes a slightly different approach to the small town life of a female sheriff in "Pray for Silence". With a keen eye for detail, Castillo thrusts readers into this exciting, fast-paced thriller from the first page beginning with an incomprehensible crime. Seven dead. An entire Amish family massacred. With dwindling hope for a speedy resolution, Sheriff Kate Burkholder and her team must work within the confines of the communal differences in their town as they search for a monster. Once Amish, Kate fully understands the difficulties of coming of age within the unbending Amish community and when she comes across the hidden diary of one of the teenage victims, the painful thread between them strengthens her conviction. She will stop at nothing to bring the killer to justice. A gripping plot with genuine, multi-layered characters and twisted crime scenes are the ideal combination for this remarkable read. Reviewed by Shannon Raab with Suspense Magazine [...]

I'm Praying for the Next Installment!

Published by Thriftbooks.com User , 11 years ago
Pray For Silence by Linda Castillo This is the second installment of Linda Castillo's Amish detective/police procedural series; and while it may be enjoyable and even advisable for you to read her first novel "Sworn to Silence" to get a better idea of the background of our main characters, the town and the religion, it is not absolutely necessary. Though I have a feeling that once you've read "Pray For Silence" you'll be hunting down the last book to see what you have missed! This book is set in the fictional Ohio town of Painters Mill, a small town with much of the townspeople being of the Amish faith. One night in mid autumn, Officer Chuck "Skid" Skidmore is taking a break from patrol when he hears the eerie howl of what could be a cow mooing, or a dog that has been hit by a car. Unfortunately it was nothing so simple. It was the screaming of a man who had just found the bloody bodies of several members of a family. We come to find out that there are 7 dead family members including an infant and two tortured teenage girls, and that this crime looks like a murder suicide. Right from the very first chapter, with no breathing room whatsoever, Linda grabs on to your throat and doesn`t let go. Actually you won`t want her to let go since this book is so spell binding, provocative and complex. There are some very clever red herrings and a tiny bit of clever misdirection with some of the suspects. Frankly, I thought I had it figured out, but was pleasantly surprised to be surprised at the ending. To complicate things further there are relationship problems between Kate and John Tomasetti a BCI agent who has helps Kate in the past and will do so again in this book. And further problems arise when the other Amish are a little reluctant to get involved with the "Englishers". Linda has a deft way of blending the Amish religion and lifestyle into these novels that deal with things the Amish rarely have to contend with. A superb read and I will be waiting anxiously for the next book in this series.
Copyright © 2020 Thriftbooks.com Terms of Use | Privacy Policy | Do Not Sell My Personal Information | Accessibility Statement
ThriftBooks® and the ThriftBooks® logo are registered trademarks of Thrift Books Global, LLC