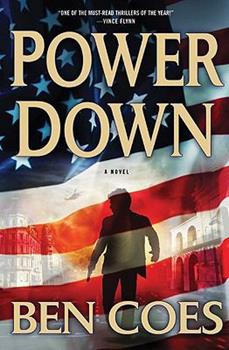 Power Down (A Dewey Andreas Novel)

(Book #1 in the Dewey Andreas Series)

"Introducing a major new thriller writer--in the vein of Vince Flynn and Brad Thor--and an electrifying character, Dewey Andreas."A major North American hydroelectric dam is blown up and the largest off-shore oil field in this hemisphere is destroyed in a brutal, coordinated terrorist attack. But there was one factor that the terrorists didn't take into account when they struck the Capitana platform off the coast of Colombia--slaughtering much of...

Published by Thriftbooks.com User , 11 years ago
A good thriller is full of action, hits you where your fears are, and stretches the bounds of your ability to suspend disbelief without breaking down. "Power Down" does all that and I blame this book for not getting anything done all day because I had to keep reading "just one more" chapter until I was at the end. First, the fears. This is a thriller about terror attacks in or affecting the U.S., a scary prospect for most people since 9/11. And the way the various terror attacks in the book are set up strikes at the core of a lot of fear. I consider myself a normally level-headed intelligent person and not a reactionary. But while I was caught up in the story, I could understand the fears that make some people want to boot everyone from a Middle Eastern country out of the U.S. no matter how long they've been here. Like I said, the author really nailed the "fear" part of the thriller. The main character is Dewey Andreas. He is the crew chief of a deep sea off-shore oil rig and is a former Ranger and Delta. (The story of how he went from Delta to working an oil rig is later in the book.) His Ranger and Delta training provide the possible believability for all the dangerous and action-filled situations as he tries to avenge the deaths of most of his crew. There are a couple other major characters on the "good guy" side: Teddy Marks (CEO of a major US energy company and former Navy SEAL), Terry Savoy (security chief for that company and former Army Ranger), and Jessica Tanzer (FBI head of counterterrorism -- yeah for at least one strong female character in the book). The main villain is particularly scary because someone like him would be among the last people suspected of being a terrorist. Another character on the "bad guy" side is someone you could believe might sell out the country for money but hope no one in the real life position ever does. The rest of the bad guys are frightening for reasons you'll find out as you read the book -- I don't want to spoil it. The book starts a little slowly to set the scene for what it going to happen. But a few chapters in, things start to blow (literally) and the action picks up. I liked the main character and found much of the action arguably believable -- or at least within my ability to suspend disbelief. (There were only two parts that didn't quite pass my believability test. One is not essential to the plot -- a small bit about a PR firm puff piece TV ad that I didn't believe they would do for free not to mention the breach of confidentiality in making it. The other isn't critical to the whole book, but there is a scene that takes place in a pumping station under the oil rig that read more like it was on dry land than at 600 feet underwater. But those are small criticisms of a book I really enjoyed. The ending sets the book up for a sequel and I look forward to reading the author's next Dewey Andreas thriller.

Published by Thriftbooks.com User , 11 years ago
The story is very good. The action scenes & suspense are on par with the best of them. The characterizations are very good. The settings are way above par and his descriptions of weaponry & technology are some of the best I've read. What the story lacks in my reading of it are enigmatic shades of gray, the nuances and subtleties of intrique that are endemic in the higher echelons of power. The story appears to be purposely straight forward in the neocon policy way of: with us or against us. (Raison d'etre?) I enjoyed the story for all the good reasons I prefaced above, but perhaps it's that I cannot stomach neocons, in any way/ except between literary crosshairs. For those of you who like great action thrillers that are authentic & suspenseful, this one is for you. But for those that like to go deep & long, take a pass.
Trustpilot
Copyright © 2022 Thriftbooks.com Terms of Use | Privacy Policy | Do Not Sell My Personal Information | Accessibility Statement
ThriftBooks® and the ThriftBooks® logo are registered trademarks of Thrift Books Global, LLC