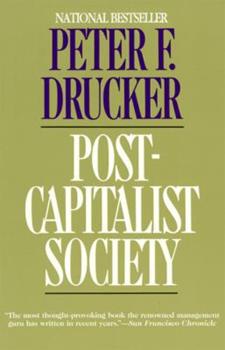 Business guru Peter Drucker provides an incisive analysis of the major world transformation taking place, from the Age of Capitalism to the Knowledge Society, and examines the radical affects it will have on society, politics, and business now and in the coming years. This searching and incisive analysis of the major world transformation now taking place shows how it will affect society, economics, business, and politics and explains how we are movingfrom...

Published by Thriftbooks.com User , 15 years ago
On April 15, 2006 the Collegiate Forum at Georgetown University held a talk on the future of labor policy in the United States and how to redistribute opportunity. Peter F. Drucker's book was cited by the discussion leader numerous times and I subsequently read it. Jonathan Fantini Porter, President of the Collegiate Forum at Georgetown University, lead the discussion and argued that the Bill Clinton Initiative and similar opportunity distribution policies, similar to the ones argued by the author, are the means to achieving a strong labor force in the United States. Peter F. Drucker is a superb source for economic policies.

Packed with insight-Unfortunately not packed with references

Published by Thriftbooks.com User , 17 years ago
Drucker is masterful in his integration of business, history and social sciences. This book covers technology, the rise of management and social trends. A great read - my only hesitation is where is the bibliography?The thesis of the book is that Marx was wrong. The major owner of capital and thus companies are now pension and mutual funds. Thus workers - primarily knowledge workers now are the main owners of companies. There are a couple of flaws in his argument though.The biggest winners in the current US stock market system aren't the pension funds - its managers and people who start companies or take them public. There is the rise of hidden perks to senior managment - stock options that are essentially free for the managers.Drucker argues that this is all small peanuts compared with Morgan or Rockefeller.Other points he makes:1) Agriculture declined to 2-3% of the workforce. Manufacturing will see a similar declining to 10-15% of the workforce2) Knowlege workers are more like members of an orchestra. The conductor could never replace the viola players.3) He forecasts the decline in the Nation state. Governments are driven by pork barrel politics.

an understanding of modern society

Published by Thriftbooks.com User , 18 years ago
drucker understands the politico-economic realities that drive us all nuts, but he measures it up with magnanimity. the knowledge society--for a knowledge worker his description can actually be somewhat humbling. no more comparing yourself to the laborers as if you've risen above. you depend on others for your living and various forces work against you. i love the way drucker shrugs off government stupidity. he sees through all the hype and hubris, but neither complains nor lectures. ok, sometimes he's a bit dry or bombastic. the originator of the business book style, so cut him some slack.

Discover why the knowledge worker produces growth and Wealth

Published by Thriftbooks.com User , 19 years ago
In Peter Druckers book, "Post Capitalistic Society", he identifies two types of workers: the service oriented worker and the knowledge worker. The knowledge worker produces magnitudes of scale more value to any organization. A knowledge worker represents the "Brains" of an organization. They know how to setup company infrastructure, keep it going, and improve upon its structure. Capital is not as important as knowledge. Capital by itself does not create wealth, innovation, or increases to productivity. Knowledge produces ideas, innovations, efficiency, and productivity.A knowledge worker can create a idea without capital, knowledge is brain power. Once the idea is realized, funders provide capital floods transforming the idea into process or product. Knowlege provides an incredible economic company potential. Remove the knowledge worker and growth stops, systems and processes stagnate. Reduce the number of service workers and operations become more efficient. Historically, as service workers number decrease their tasks and output have increased proportionate to their numbers. Basically, the service worker were expected to "Do More with less".Knowledge represents the whole expertise in domains of finance, information, policy, management, etc.. The knowledge worker generates the "Ideas". Ideas are transformed into processes and systems. Its principles of creativity and credibility which provides trust in the idea. Drucker concludes that knowledge itself is profitable. In the post capitalistic society knowledge produces wealth. Knowledge increase productivity. The sum of knowledge in a domain increases productivity and growth exponentially. Its this radically breakaway phenomenia which knowledge produces providing wealth and growth to an organization.