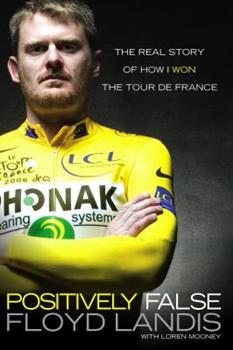 Positively False: The Real Story of How I Won the Tour de France

by Loren Mooney and Floyd Landis

THE SERIES OF EVENTS surrounding Floyd Landis's 2006 Tour de France was as improbable as anything in the history of sports: He showed up nine seconds late for the race's opening prologue, donned the leader's yellow jersey twelve days later, and lost his lead only to regain it in remarkable fashion just before the Tour's final stage into Paris. Winning the Tour should have been the culmination of a life's dream, but a mere three days later, Landis...

A great read, and convincing

Published by Thriftbooks.com User , 13 years ago
I remember watching on TV the day Floyd Landis bonked famously on a Tour de France climb. I thought, "He's smart to give in to it. He'll have a great day tomorrow." We've all been there. A bad day very often precedes a great day, and vice versa. Thanks to his power meter data, it's clear that what appeared to be an inhuman turnaround the next day was actually a combination of smart team tactics, hard training (he was well within his normal hard load), physiologic recovery, and cagey use of water (dumped over his head to create a cool microclimate for himself). A sloppy French lab then created, purposely or inadvertently, a false positive, and an unfair process made it impossible (unclear if this is true yet) to rectify. It's sad how science is being used to advance causes these days, but it's nothing new. Even religion has dressed itself up as science in an attempt to advance its world view. Landis' book is refreshing. He's painfully blunt at times, and a tone of honesty permeates the storytelling, which is brisk by the way. This book reads clearly, you can hear Floyd's voice, and it is hard to put down. I enjoyed it thoroughly. After reading this and previously having read Arnie Baker's analyses and the ruling from the first arbitration panel (which captures enough lab flaws to leave you scratching your head at the fact that it still resulting in a guilty verdict), I believe that Floyd is innocent, and that he is being railroaded by a system out of control. A great cycling book.

Published by Thriftbooks.com User , 14 years ago
I'm usually not one to buy a sports bio, but Positively False is truly an informative and entertaining read. Floyd make his case, and has changed my mind. The TDF incident aside, it was nice to an insiders view at the life of a professional cyclist.

Published by Thriftbooks.com User , 14 years ago
This was a great book and an easy read. The points made are tremendous and one can only hope Floyd can help the sport of cycling. I watched every minute of the tour last year and this year and I'm so over doping. They need to fix the problems and catch the guilty, NOT the innocent. What should have been the best moment of his life was quickly turned to the worst becuase of a process that does not work. Even if found not guilty, the damage has been done to Floyd. I definately recommend this book and the Fairness for Floyd foundation.

Even if you know the story it's a good read

Published by Thriftbooks.com User , 14 years ago
I didn't want to believe it when I heard it and we all had reason to doubt the results to begin with because of past "doping" alegations (Butch Reynolds, Lance Armstrong). BUT, beyond all the testing, science and legal info is a good story that's well-written. Mooney knew well enough to stay out of the way and let Floyd talk. Floyd's story is important beyond a good sports yarn. Cheating hurts everyone, but fighting cheaters by cheating only creates tragedy. I hope Floyd is able to ride his bike until everyone who has conspired to get him off it is confined to walkers and wheelchairs!

Published by Thriftbooks.com User , 14 years ago
Before reading this book, I had really only heard the repeated statements in the mainstream press that Floyd Landis' drug test results from Stage 17 of last year's Tour de France revealed a testosterone to epitestosterone ratio (T/E) of 11:1, far above the allowable 4:1 ratio. But there was something about Floyd that made me feel he was not the type of athlete who would using doping to win. So when this book came out, I immediately purchased it in order to hear Floyd's side of the story. What you get in this book is a very open, honest, and engaging telling of Landis' cycling history, for example: his first bicycling experiences as a boy; his first races in the U.S. and abroad; the accident that injured his hip; his experiences riding alongside Lance Armstrong and other greats; his major cycling victories leading up to his win in last year's Tour de France. Throughout the narrative, Landis and Loren Mooney weave in text about Floyd's personal life, including his Mennonite background (for example, how he snuck out late at night to bike since his father had intentionally filled his day with chores), how he met his wife, and even his taste for heavy metal music like AC/DC and Metallica to psyche himself up (he also often winds down with some Johnny Cash). I really felt that I knew Floyd well after reading this book. The overall impression I got from his life story confirmed my gut feelings from before--this is not the type of person who would feel the need to cheat to win. With Floyd, what you see is what you get. He has nothing to hide. As he tells the story of his doping case, it becomes increasingly clear that the French Lab responsible for his Stage 17 blood test was run much like the Keystone Cops--mixing up sample numbers, not following there own rules for what constitutes a positive sample, and inconsistent when compared to other international labs (for example, the same samples run in an Australian lab and also at UCLA would have been judged as negative). In a nutshell, this book is a great read--I stayed up late a couple nights because I could not put it down--and after reading it I find it impossible to believe that Floyd Landis cheated. If anything, the French Lab that ran his urine tests at last year's Tour should lose it's certification and be banned from future Tour's. Read this book if you want to know the truth about Floyd Landis' 2006 Tour de France victory. Highly recommended!
Copyright © 2022 Thriftbooks.com Terms of Use | Privacy Policy | Do Not Sell My Personal Information | Accessibility Statement
ThriftBooks® and the ThriftBooks® logo are registered trademarks of Thrift Books Global, LLC