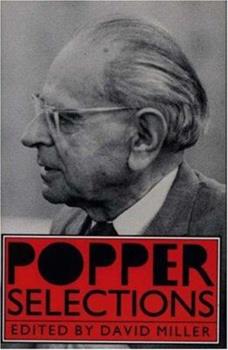 One of the most controversial of twentieth-century philosophers, especially for his devastating criticisms of Plato and Marx and for his uncompromising rejection of inductive reasoning, Sir Karl Popper relentlessly challenged both the authority and the appeal to authority of the most fashionable philosophies of our time. His own philosophy of critical rationalism is distinctive in its emphasis on the way in which we learn through the making and correcting...

Published by Thriftbooks.com User , 15 years ago
Warning: I am highly biased, as Karl Popper is one of my most influential "mentors." As time passes, his wisdom increases, and his value as an original thinker becomes more, not less, vivid -- even if many of his "controversial" ideas in the Thirties are now considered normative. Popper's collected essays, derived from class lectures, offers a broad introduction to the work of this seminal philosophy. These essays cover scientism, the scientific method, the scientific attitude, nominalism, historicism, democracy, falsification principle, evolutionary thought and applications, rationality, epistemology, and more. While heralded as the scientists' philosopher of science, Popper's thought is not so provincial. His brevity and clarity of analysis are brought to bear on many subjects, practical and theoretical. His perspicacity and directness leave no room for ambiguity. The one philosophical topic not addressed in this representative volume is ethics. Popper's central theme, of course, is science and how the scientific attitude and method fundamentally change our modern perceptions. While no longer controversial, indeed his thought has become commonsense, he, alone of the Vienna Circle, survived intact decades later. Because of the clarity, incisiveness, and rectitude of his claims, I purposefully return to him every five or so years to get "grounded" again. One doesn't experience "eurkea" with Popper, one simply becomes reacquainted with basic knowledge and a few first principles. Perhaps a few "tweaks" occur, but Popper is more of an anchor than a revolutionary. Even his "defense" of science comes with numerous caveats. Given the topsy-turvy intellegensia stirring up the pot with new "-isms," it's useful to have a "home" to come back to. Because his commonsense prevails, his controversial stances several decades ago, while not quite platitudes now, are "defaults" that have withstood the strongest assaults. I cannot think of another major thinker who has withstood time and challenges better. A couple of examples of Popper's gems: Democracy is not the best form of government; rather, it is the best form for excising bad government (this novel insight, a Popper first, is repeated by many subsequent political theorists, e.g., Ian Shapiro, Michael Walzer, John Rawls, etc.). An "open society" is more important, but this preeminent value requires the "background" of democracy. Central planning by governments should be confined to the margins, tinkering with changes that can be reversed before bad policy and unintended consequences become ensconced. If useful, then begin the reach. His skepticism does not permit purchase of any ideology. All historicisms are fortune-telling religious dogma, erroneously believing the past predicts the future, or that "inevitability" resides with the forces of History. Humans exist in an "open" environment, while science's predictability requires a "closed" environment; ergo, all "human sciences" are at best informed o

The Tradition of Critical Discussion + more..

Published by Thriftbooks.com User , 16 years ago
Brilliant, clearly written, and wonderfully brief essays that span the life works of Karl Popper, organized into four parts: Theory of Knowledge, Philosophy of Science, Metaphysics, and Social Philosophy. Perhaps best known for his 'Open Society and Its Enemies' (written during WWII while in New Zealand), Popper is clearly an advocate of open and free debate in all academic disciplines. Against solving irrelevant 'puzzles of language' - a habit of philosophers and Ludwig Wittgenstein in particular (Read book on this: 'Wittgenstein's Poker') - Popper is most concerned with solving real world 'problems' that impact human life. 'Our ignorance is sobering and boundless' he suggests but, together, through open-ness we can move toward finding ever-adjusting solutions for a better world. Like other survivors of WWII (e.g. Isaiah Berlin), Popper is especially concerned with those who advocate 100% solutions to society's woes. One of our clearest advocates of the lessons of the Ancient Greeks, Popper tells us: The 'tradition of critical discussion' was the secret of the ancients. This tradition leads us to the realization that our attempts to find 'truth' are never final; and that criticism and critical discussion are our only means of getting nearer to the truth. For those interested in: 1) Clear-headed discussions on science and philosophy, and 2) Hearing from a strong advocate of freedom and the 'western tradition' read this book. And bring a pencil.

Published by Thriftbooks.com User , 17 years ago
Popper's favorite philosophers are the pre-Socratics. He celebrates them for their willingness to entertain/invite/encourage alternative points of view. The pre-Socratics sought to explain the universe ( a goal modern philososphy/science has lost sight of) but no one theory was viewed as absolute, rather each theory was viewed as a proposition that could then be honed/improved/altered by further argument/inquiry. This spirit of inquiry begins to vanish around the time of Plato and Aristotle for their teachings begin to be passed down not as theories that can be improved upon (modified or dismissed) but as knowledge. For Popper reverence for "great men" and "great ideas" only stands in the way of pluralism and progress. Poppers method is to identify the mistakes made by the "great men" and therefore clear the way for further inquiry. Of all the western philosphers Plato receives the most attention. Popper finds much to admire in Plato but also much that needs amending. In an essay on "subjective" and "objective" knowledge Popper evolves his idea of a third "world" of knowledge. This autonomous third world of knowledge is reminiscent of Plato's theory of ideal forms with one essential difference. For Popper all knowledge is man made and so his third world of knowledge contains not ideals(in Popper's world ideals do not exist) but "problem situations" -- the state of a discussion or the state of a critical argument at the present time and these "states" make up the "objective contents of thought". In the world according to Popper thought ( in the philosophic and scientific realms) evolves because a variety of thinkers make a variety of creative propositions that are then examined and found to be true or false. Popper calls this method "critical rationalism". In each of these essays Popper addresses a key philosophic issue and discusses it with his signature grace, eloquence and humor. His contribution to social theory seems especially significant and on this topic he is especially eloquent. Being no great believer in the great man theory of history and knowing full well that all of mans ideas as well as social theories are riddled with mistakes Popper thinks the best way to advance socially is in a piecemeal fashion. This limits the harm any one man or theory or institution can do. For Popper society like philosophy and knowledge is the result of an ever renewed inquiry. This is clearsighted and jargon free writing and these are model essays!

A great introduction to the writings of Karl Popper

Published by Thriftbooks.com User , 20 years ago
This is one of my few cherished books - it gives an overview of the thinking of one of the great philosophers of modern times, Karl Popper. Miller's organization and introduction of the material contributes significantly. I first became interested in Popper for his view on science. In a nutshell, that falsificationism is the best (only?) approach to practicing science. Popper's view taken literally might not make a full arsenal for a working scientist, but the spirit of his idea - that mistaken but provocative theory contributes importantly to the progress of science - is liberating, even exhilirating. Sounds a little strange? Well, try it and see for yourself. Popper is probably the only philosopher of science who has had an impact on how scientists actually think about their work. Others, who may try to strike a more balanced tone, end up writing mush. From Miller's fine collection we learn that Popper has done much more, including making important contributions to social and political theory. This book will also introduce the reader to one of Popper's personal wellsprings, the pre-Socratic philosophers. In all, this book is an intellectual treasure.

Best Summary of Popper's Ideas Out There

Published by Thriftbooks.com User , 22 years ago
This is one of my favorites in my bookcase. Popper has a gripping writing style and these essays provide short glimpses into his most important ideas. Probably not for the general reader, but for anyone having an intellectual interest in science and society, this book covers Popper's ideas on the faults of inductive reasoning, his definition of science vs. pseudoscience, his views on intolerant thinking and behavior, and even his idea of 'piecemeal social engineering,' an idea ahead of its time. Throughout this book, Popper emerges as a warm, brilliant thinker, one of the best of the 20th Century. The editors have done a wonderful job compiling these selections, and the book is of fine quality construction and will last for many years on the buyer's bookshelf.
Copyright © 2020 Thriftbooks.com Terms of Use | Privacy Policy | Do Not Sell My Personal Information | Accessibility Statement
ThriftBooks® and the ThriftBooks® logo are registered trademarks of Thrift Books Global, LLC