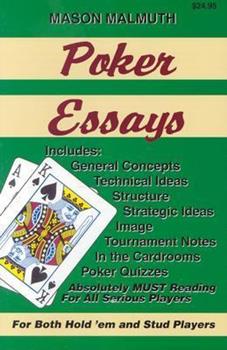 by Mason Mulmuth and Mason Malmuth

There's more to poker than the obvious matters of odds and bluffing, as poker master Mason Malmuth--himself a professional mathematician--discovered long ago. Now Malmuth shares his insights and... This description may be from another edition of this product.

Still very much worth reading

Published by Thriftbooks.com User , 15 years ago
This is the first collection of Malmuth's essays, most of which were originally written for Card Player Magazine beginning in the eighties, and rewritten or at least touched up for this book which originally came out in 1996. For the professional poker player they are something close to a must read because of the range of Malmuth's interests and because of his thoroughly professional approach. Malmuth does not pretend to be a world class player and most of his experience comes from middle level cash games prior to the rise of the tournament phenomenon. But make no mistake about it, Malmuth knows poker. Not only is he the author of perhaps a dozen books on the subject, but he is well known and respected among professionals. Typically he played $20-$40 Hold'em and Seven Card Stud games in Las Vegas for many years and perhaps still does. I must have played with him some time before that in the Gardena clubs, but I don't recall meeting him. I have talked to regulars who have played with him, and they allow that he is a good, if unspectacular player who will definitely be a drain on your win rate. The essays here concern some topics that are no longer of anything but historical interest, such as lowball and draw poker, spread limits, the old jackpot games in the Los Angeles area, and in general the atmosphere and conditions that prevailed in California and Las Vegas ten to twenty years ago. However, most of the book is still surprisingly relevant and even topical. Malmuth spends some serious ink on delineating the differences between seven card stud and hold'em, which skills are better applied to which game, and which game is juicier and why. He also enters the debate about which game--limit hold'em or no limit hold'em-requires more skill to play well. He supports the minority opinion that it is limit hold'em and he makes some very good arguments for that somewhat surprising opinion. Personally I think it's clear the limit hold'em requires more technical skill and knowledge, but no limit requires more hand- and player-reading skills, and more "gut." What sets Malmuth apart from almost all other poker writers is his willingness to write about the nuts and bolts of the poker world. He opines on cardroom management, on which games should be spread and why, on tipping the dealer, on cardroom behavior, and he loves to dispel and refute poker myths and misinformation. He likes to quote (anonymously of course) from would-be poker authorities and tell you why he thinks they're wrong. But, like David Sklansky, Malmuth especially likes to write about poker strategy. Some of the best essays in the book include: "Common Seven Card Stud Errors." He gives 23, and I have to say I agree with all of them, although a few are fairly trivial like "Checking blind on the end when you have an obvious flush draw"--few good players would do that except as a play. "Differences between Stud and Hold'em." He gives eleven differences including #6, "It is oft

Great book about poker and LIFE!

Published by Thriftbooks.com User , 17 years ago
Poker Essays is a great collection of articles on life and poker. If you're looking to play for any serious amount of money, part-time income, or full-time playing like myself, this is great reading.

A classic in the poker literature

Published by Thriftbooks.com User , 18 years ago
Also see my longer review of volume III in this series.This book is a collection of essays from Malmuth's columns in poker magazines, including the excellent Card Player.As the author or co-author of many of the definitive books on poker games and ideas, with advanced degrees in math and extensive study in psychology along with multiple decades of experience as a poker pro, Malmuth is eminently qualified, and almost all of his books deserve your attention if you are at all serious about improving your poker game.I have read (and reread) just about all of his writing, and this book is no exception. Divided into several sections, this book covers important and relevant ideas in poker, in short (2-4 pages each) essays, that don't really fit well into a pigeonholed topic. The book doesn't repeat ideas from other sources, but rather expands on them, or discusses a new twist on a particular idea. The nature of short, separate essays lends itself well to reading in small chunks or all at once - you can benefit from this book with just five minutes. And, the reading is entertaining and interesting - no small feat for a book with filled with complex ideas and accurate technical ideas.This is one of a handful of poker books that I, and many other professionals, refer to and reread again and again. This book probably should be used to supplement the other great poker literature and not stand by itself.Also see Volumes II and III in the series, each includes his best writings over about a five year period. Highly recommended.

Published by Thriftbooks.com User , 21 years ago
Mason Malmuth in Poker Essays I and Poker Essays II provides the most direct and relevant general information on playing poker. Having played casino poker for a decade and having read and reread most of the poker literature I feel that Malmuth provides the most credible material. The information in both of these books is general, covering all aspects of poker. If you are interested in the world of poker then these books should be part of your global reference. (These books are a reedited collection of magazine columns.)

Published by Thriftbooks.com User , 22 years ago
It was a great book and contained much informational essays.
Trustpilot
Copyright © 2022 Thriftbooks.com Terms of Use | Privacy Policy | Do Not Sell My Personal Information | Accessibility Statement
ThriftBooks® and the ThriftBooks® logo are registered trademarks of Thrift Books Global, LLC