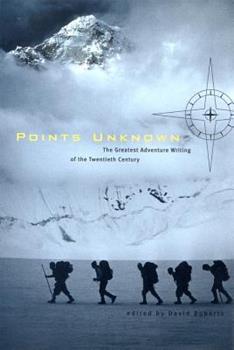 Points Unknown: The Greatest Adventure Writing of the Twentieth Century

From Robert Falcon Scott's final journal entry to Jon Krakauer's reckless solo climb of the Devil's Thumb, David Roberts and the editors of Outside have gathered the most enduring adventure literature of the century into one heart-stopping volume. A frigid winter ascent of Mount McKinley; the vastness of Arabia's Empty Quarter; the impossibly thin air at Everest's summit; the deadly black pressure of an underwater cave; a desperate escape through...

Fastest 600 pages I ever read

Published by Thriftbooks.com User , 11 years ago
If you like adventure nonfiction, go no further. This is a compendium of excerpts from lots of other great books, sort of like Reader's Digest. Each chapter is easy to absorb, and they are all absorbing. No matter what you're into, there is probably a cool story about it. And you will read other cool stories about things you never imagined. This book is a great starting point to finding other great works of adventure nonfiction.

whole library in one volume

Published by Thriftbooks.com User , 15 years ago
this is a wonderful book, well-edited and encompassing the best of 19th and 20th century writing. Enjoy!

Published by Thriftbooks.com User , 19 years ago
This book is an interesting concept; a collection of excerpts from explorer's accounts of their journeys. The categories of adventure that fit within these 607 pages are almost as numerous as the 43 different excerpts. Mountain climbing seems to be the most prevelent form of exploring but there is also (Ant)Arctic treks, desert journeys, jungle adventures, white water canoeing, solo sea voyages, wilderness explorations, hunting, aviation, cave exploration, surviving a plain crash in the mountains, etc.. The editors confined their anthology to 20th Century accounts and quality of writing was an obvious consideration in their choices. They also did a good job of excerpting some very exciting moments in the chronicles of man versus nature. This is a good introduction of some great accounts of true adventure. Many a reader will want to go out and read some of the books these excerpts come from. I felt this book was more a 4.5 than a 4 but I didn't want to give it too high of a rating. I felt the shortcoming was that there was a fair amount of technical jargon to weed through(especially in the area of mountain-climbimg). The editors did do a decent job of footnoting the more technical items but I would have preferred less mountain-climbing and more "in search of lost civilizations". However, that is MY preference and I could easily be in the minority. I was a little surprized at the quality of the hardbound edition. The paper used was the same as that used in magazines which gave it a somewhat "cheap" appearance. There is nothing "cheap", however, in its' content. Whether you read it cover to cover or savor each adventure in its' own time, you will find a lot of excitement and enjoyment in this book.

Published by Thriftbooks.com User , 20 years ago
If adventurers, and what motivates them, fascinate you, then this book must be added to your reading list. In it, some of the 20th. century's finest explorers and wanderers take you with them on their journeys.As might be expected, there is drama. The opening piece is taken from the diary of Robert Falcon Scott, written as he literally froze to death on his final trek back from the South Pole. However, there is also tongue in cheek humor from the likes of Laurens Van Der Post and Eric Hansen, and superb, on-the-edge-of-your-chair excitement in pieces by Edward Abbey, Jon Krakauer and Joe Kane.Here too, tucked into the corners of the collection are pieces one might not expect to find in an anthology of adventure writing. There is Freya Stark's touching piece on Ishi, the last of a tribe of Northern California Indians, Clyde Kluckhohn's climb to Wild Horese Mesa, and Edward Hoagland's piece on a day spent trapsing over the Alberta Rockies that ends with the sighting of a lion. Editor Dave Roberts and his team have done a marvelous job of pulling together some exceptionally fine writing that reveals the many sides of adventure. I had only three small complaints (not complaints really, just disgruntled comments). First, none of Roberts' writing was included, which was disappointing considering that he is one of our finest adventure writers working today. Second, there was an over emphasis on mountain pieces, which meant that some other equally fine writing had to be excluded. And third, there was a marked lack of works by women adventurers. Roberts claims that he and his team hunted for women authors who met their criteria, but they were not to be found in the 20th. century. Since I can think of 4 off the top of my head, I can only conclude that they didn't look very hard. As I say, small bones of contention in an otherwise outstanding book.

Published by Thriftbooks.com User , 21 years ago
Points Unknown gathers moving, vivid excerpts from over forty of the greatest first-person adventure stories in English, covering all terrains and encounters and including works by Colin Fletcher, Edward Hoagland, Laurens van der Post and other notables. Any with an armchair passion for adventure travel will find this an exceptional presentation of a century of exploration drama.
Trustpilot
Copyright © 2022 Thriftbooks.com Terms of Use | Privacy Policy | Do Not Sell My Personal Information | Accessibility Statement
ThriftBooks® and the ThriftBooks® logo are registered trademarks of Thrift Books Global, LLC