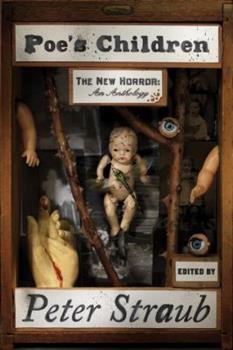 We receive 23 copies every 6 months.

From the incomparable master of horror and suspense comes an electrifying collection of contemporary literary horror, with stories from twenty-five writers representing today's most talented voices in the genre. Horror writing is usually associated with formulaic gore, but New Wave horror writers have more in common with the wildly inventive, evocative spookiness of Edgar Allan Poe than with the sometimes-predictable hallmarks of their peers. Showcasing...

A taste of the new horror

Published by Thriftbooks.com User , 13 years ago
It was a pleasure to find this book (I'm a fan of both Stephen King and Peter Straub). It is a good compilation, the stories are good and a good mix of different approaches to the horror genre. Hopefully some of the writers in this book will become just as good as Mr. Straub ;)

Basically, "The Twilight Zone" for the academic crowd

Published by Thriftbooks.com User , 13 years ago
Interesting collection of "literary" horror stories of various flavors and stripes. Of course, the "literary" qualification means that more than once you'll be saying to yourself, "Hmmmmmm, I wonder what the writer was going for there." But that's okay-- the stories aren't boring, and striking imagery and characterizations abound. Definitely not a bad book to read in a discussion group, though, as readers would likely benefit from bouncing ideas and observations off one another about the colorful, often intense strangeness on display. An illuminating introduction by editor Peter Straub discusses the importance of these often complex stories on the publishing map, lauding their authors for writing scary, disturbing fiction that nevertheless resists being classified simply as "horror fiction". I actually listened to the audiobook edition of "Poe's Children", which features unabridged selections (about a dozen) from the printed version. It's an excellent production, beautifully read by a variety of narrators. However, I wish there was a little break between stories, perhaps a ten or twenty second musical interlude, so the impact of one story could sink in before we go right into the next one. But that's a quibble. Audio or print version, this is easily recommended for short story enthusiasts with a sense of adventure. I may actually pick up the print edition at some point (maybe download it on my Kindle), so I can experience the stories that weren't included in the audio version.

Published by Thriftbooks.com User , 14 years ago
What do you think of when someone mentions the Horror genre - vampires and zombies? Homicidal monsters shredding people's throats? Well, there is so much more to Horror than that. This interesting book brings together Horror short stories written by twenty-four different authors, each written in their own individual style. Now, there are way too many stories in this book to give a synopsis all of them, and they are all so different. I really like The Bees, which I found to be the most horrifying of them all - so ripe with horror and regret. And The Two Sams was absolutely heart breaking. Yeah, this is an excellent anthology. And, do you know what's the best thing about reading anthologies like this one? It allows you to discover wonderful authors that you have never read before. I really enjoyed this book, and don't hesitate to recommend it.

Published by Thriftbooks.com User , 14 years ago
Poe's Children: The New Horror, an Anthology edited by Peter Straub is a terrific collection of short stories by a varied collection of authors. Straub includes one of his own stories, Little Red's Tango, a story that is sure to grab the reader's attention. I have to admit that I had a little difficulty getting into the rhythm of the story, but once I did I found Little Red's Tango to be truly worthwhile. Also included is a great story by Stephen King, The Ballad of the Flexible Bullet, another story dealing with an author who is convinced that his typewriter is possessed. I think this is King at is "short story" best. I was also pleased to see that Neil Gaiman was included with his October in the Chair. Here's a list of all the stories included in Poe's Children: The Bees Dan Chaon Cleopatra Brimstone Elizabeth Hand The Man on the Ceiling Steve Rasnic Tem and Melanie Tem The Great God Pan M. John Harrison The Voice of the Beach Ramsey Campbell Body Brian Evenson Louise's Ghost Kelly Link The Sadness of Detail Jonathan Caroll Leda M. Rickert In Praise of Folly Thomas Tessier Plot Twist David J. Schow The Two Sams Glen Hirshberg Notes on the Writing of Horror: A Story Thomas Ligotti Unearthed Benjamin Percy Gardner of Heart Bradford Morrow Little Red's Tango Peter Straub The Ballad of the Flixible Bullet Stephen King 20th Century Ghost Joe Hill The Green Glass Sea Ellen Klages The Kiss Tia V. Travis Black Dust Graham Joyce October in the Chair Neil Gaiman Missolonghi 1824 John Crowley Insect Dreams Rosilind Palermo Stevenson Also included at the end is a brief biography of each of the authors. I suspect that like many readers, I have just a wee bit of difficulty reading when the story/author changes. Authors write with their own cadence. It always takes me a page or two to get in step, but other than that, I look forward to new anthologies, especially in the horror genre. The best story in the collection, in my opinion only has to be October in the Chair by Gaiman, followed closely by Cleopatra's Brimstone. Picking these over the others is really pretty arbitrary since all of the stories are grabbers. All things considered, Poe's Children is a unique collection by a diverse group of authors. I highly recommend.

Published by Thriftbooks.com User , 14 years ago
Peter Straub selects 24 short stories that represent "the most interesting development in our literature during the last two decades." The crossover between works usually classified as fantasy, sci-fi, and horror genres and those considered to be literary, he asserts, "erases boundaries and blurs distinctions." Two of the better tales are Stephen King's "The Ballad of the Flexible Bullet" (1984)--a story about the genesis of insanity, featuring a writer who suffers from the paranoid delusion that an imp inhabits his typewriter--and Elizabeth Hand's "Cleopatra Brimstone" (2001), a story about an entomologist who is sexually assaulted and wreaks her revenge on men by "collecting" them in bizarre fashion. King and Hand, plus 22 other New Wave horror writers, exhibit telltale affinities with the spooky imagination of Edgar A. Poe. If you are a fan of horror stories written by inventive wordsmiths, this quality work is just your cup of tea! About the author: Peter Straub is the author of 17 novels, including Ghost Story and Koko, as well as two collaborations with Stephen King. Winner of eight Bram Stoker Awards, two International Horror Guild Awards, two world Fantasy Awards, and both a Lifetime Achievement Award and election as a Grand Master from the Horror Writers Association. He lives in New York City.
Trustpilot
Copyright © 2022 Thriftbooks.com Terms of Use | Privacy Policy | Do Not Sell My Personal Information | Cookie Preferences | Accessibility Statement
ThriftBooks® and the ThriftBooks® logo are registered trademarks of Thrift Books Global, LLC