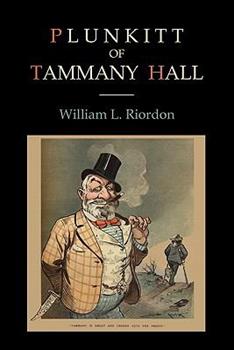 Plunkitt of Tammany Hall A Series of Very Plain Talks on Very Practical Politics William L. Riordan "Nobody thinks of drawin' the distinction between honest graft and dishonest graft." This classic... This description may be from another edition of this product.

Corruption as a Public Good

Published by Thriftbooks.com User , 18 years ago
In history's rear view mirror, George Washington Plunkitt appears to be just another guy in a long line of corrupt politicians. There's no denying that he was corrupt, but as William Riordon recounts, Plunkitt honestly believed that he was not doing the public any harm. In fact, he believed that there was such a thing as honest graft, a sort of victimless crime. Certainly this was a self-serving philosophy, but there is a sincerity in his discourses that defies any trace of hypocrisy. His belief that Tammany Hall was a benevolent organization that served the poor and needy put a bemused smile on my face. After all, Plunkitt doesn't see or doesn't admit to seeing that the robbing of public funds through honest or dishonest graft is what contributed to the social problems, like unemployment, poverty and crime, which for the most part put the needy and poor in their predicament in the first place. But he absolves himself from his actions by his now-famous defense, "I seen my opportunities and I took 'em." And this is what makes Plunkitt such a congenial and magnetic man, what makes him so damned likeable. You KNOW he's a thief, you KNOW he contributed to the misery of thousands. Yet his playful, plain-speaking style, his candidness about his activities, his wit, and, at times, his goofiness, make him different from other Tammany leaders like Boss Tweed, say, or Charlie Murphy. He's more in line with Big Tim Sullivan or James J. Walker.George Washington Plunkitt was a charmer, no doubt about it. William Riordon was obviously under his spell. And the Johnson/Boswell comparison is very valid. It is difficult to maintain the utter contempt one should have for this thief. And yet... I would have loved to have had drunk with him at Hoffmann's bar and let him speak on for hours. Like Riordon, I think I would have been hypnotized too.NB--Peter Quinn's brilliant Introduction serves the book well.Rocco Dormarunno, author of The Five Points

Published by Thriftbooks.com User , 21 years ago
George Washington Plunkitt is simply charming. Corrupt, of course, but charming nonetheless--and refreshingly honest about his corruption, which is part of his charm. I got more than a few quiet chuckles from his "very plain talks on practical politics" and almost felt I was reading a series of Mark Twain monologues. A reader has to be careful around Mr. Plunkitt. He exhibits attractive, quintessentially American qualities such as a smart, down-to-earth common sense, a kind of "tell it like it is" honesty and a readiness to hustle to achieve his goals. He also, however, has such negative traits as, among others, anti-intellectualism and a propensity to employ the better parts of his character in the service of very pragmatic--in the derogatory sense--goals. Yet I *like* the man, and I think most readers do. The way he talks about himself endears me to his vices and very nearly makes me forget that graft is graft, whether "honest" or not. This ability of his (or of his interviewer/editor/co-author), apart from his astute observations or the fuller appreciation he might give some readers of the politics of Tammany Hall and the patronage system, is probably the key to his book's enduring popularity. He's simply interesting, and that is enough reason to read his book.

One of the most important political books

Published by Thriftbooks.com User , 21 years ago
Rarely is a political book as entertaining as it is informative. This is one of those rarities. Riordon provides a classic examination of the reality of big-city politics as it was practiced a century ago. Any principled person considering a career in politics should read this book to understand what makes many self-interested, career politicians tick.

An excellent book for the study of political machines.

Published by Thriftbooks.com User , 22 years ago
I used this book for research on turn-of-the-century politics, particularly political machines. I found it to be very useful in describing the ways party bosses manipulated and filandered in order to gain power. Plunkitt's candid style made for a very entertaining and informative read.

Published by Thriftbooks.com User , 22 years ago
Plunkitt was a king in a world that needed benevolent despots. In a place like turn of the century of New York before Keynesian economics and the Welfare State, Tammany was the only relief the poor knew. Plunkitt reveals with refreshing honesty the seemingly rough and coarse manner with which one needed to play the game of politics in his town. However, one must look at it in context. This was a different time from our own, and the reader must imagine whether a person of Plunkitt's demeanor can last in the information age political world. Then again, the book also illustrates how many of the problems Tammany had still exist today.
Copyright © 2022 Thriftbooks.com Terms of Use | Privacy Policy | Do Not Sell My Personal Information | Accessibility Statement
ThriftBooks® and the ThriftBooks® logo are registered trademarks of Thrift Books Global, LLC