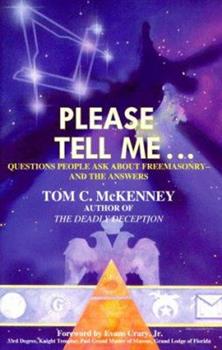 Please Tell Me...: Questions People Ask About Freemasonry-And the Answers

Tom McKenny has compiled the questions most often asked by the public concerning the cult-like nature and anti-Christian activities of the Masonic movements.

Published by Thriftbooks.com User , 18 years ago
It didn't take much for me to realize the dangers of masonic symbolism. One hour in a book store with an occult book showed me all I needed to know to stay away from freemasonry. I was enticed by how much good they do for children, too bad the healthcare system can't do it. However, they don't do much for salvation, actually they do a great deal for damnation. Sorcery at it's most subtle. And to think it all started with research into the masonic symbolism within the Great Seal of The United States. Magick is magick and it's opposite Christ. Pray, in Jesus' name, that more people's eyes will be opened through the Holy Spirit, and that He will fill our country's leadership.

Great overview for exposing the "secrets" of Freemasonry

Published by Thriftbooks.com User , 21 years ago
If you are curious about the "secrets" of the Masonic Lodge (and it's branches such as the Eastern Star, Scottish Rite, Grotto, Shriners, etc) and if you only have time to read one book, this should be the one. In a short, easy-to-understand, yet thoroughly documented manner, McKenney explains the truth about Freemasonry, some of which may shock you. I have read many books on Freemasonry and this one provides the best general overview. I highly recommend this book for the friends and loved-ones of Masons that may have wondered why an organization that claims to do so much good is so secretive. It may also be good for some Masons that have entered the Lodge without thoroughly understanding its true nature. I especially, recommend this book to anyone who may be or may know a Mason that claims to be a Christian. This book will show you some serious conflicts between Freemasonry and the teachings of the New Testament.It is obvious which reviews on this website were written by Masons. (Notice that they consistently claim that, despite thorough documentation, statements about the Lodge are false, yet they never produce any documentation of their own to support such claims.) I suggest ignoring such biased reviews and letting the documented facts, such as those in "Please Tell Me" speak for themselves.

Published by Thriftbooks.com User , 21 years ago
Excellent book! Reaveals how the origins of masonry are distinctly anti-Christian, despite a tremendous Christian membership. Details how Mason Rituals directly defy biblical commands. Also detailed are Masonic assassinations, punishing those who reveal Masonic "secrets". Seem unbeleivably archaic? It would surprise you that the last confirmed assasignation occurred only 12 years ago! Despite detractors' comments, it is extremly well researched. This author does his homework on other topics as well. For more verification sources on this subject, do a web search on "Chuck Missler". He is the consumate researcher on this and other vital issues. Be wary of those who whould disuade you from this type of info. They often have a hidden agenda. God Bless!
Copyright © 2022 Thriftbooks.com Terms of Use | Privacy Policy | Do Not Sell My Personal Information | Accessibility Statement
ThriftBooks® and the ThriftBooks® logo are registered trademarks of Thrift Books Global, LLC