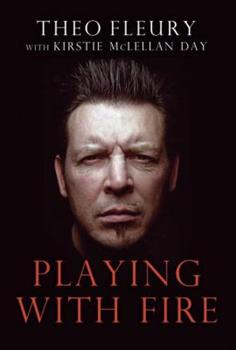 Playing With Fire: The Highest Highs And Lowest Lows Of Theo Fleu

This description may be from another edition of this product. In Playing with Fire , now in trade paperback, Theo Fleury takes us behind the bench during his glorious days as an NHL player, and talks about growing up devastatingly poor and in chaos at home. Dark...

Published by Thriftbooks.com User , 11 years ago
If you're a hockey fan, you'll love it. It's very honest, open and and a bit shocking on what goes on in players lives. It's a must read, I couldn't put it down and read it in 2 days!

Published by Thriftbooks.com User , 11 years ago
A very entertaining and motivating read. I great behind the scenes look at the REAL NHL.

Published by Thriftbooks.com User , 11 years ago
Purchased this book for my boyfriend for Christmas. He couldn't put it down until he was finished it. According to him it was well written and has been lending it to his friends.

Published by Thriftbooks.com User , 11 years ago
While I have NEVER been a real fan of Theo Fleury nor a fan of the Flames, I got the book because I always had respect for the little man that chose to play hockey like he was 6 foot 2. (plus the Flames were my dad's team since they were in Atlanta). It has given me alot of insight into why he played the game the way he did. I may not have liked Fleury, but I still respected him.

Put your hand into the flame -- you'll be glad you did

Published by Thriftbooks.com User , 11 years ago
This is one of the best memoirs I've ever read. Actually, it's one of the best books I've ever read. I've read a lot of memoirs and biographies, and this one is brutally honest -- heartbreakingly so. Theo Fleury's book contains many stories. It's the story of a Canadian who grew up poor on the prairies and clung to his dream like a lifeline. It's a story of a broken, lonely childhood plagued by demons and abuse. It's a story about the drive to be the best at a particular sport. It's a story of addiction to booze, drugs, and sex. It's a story of both dizzying success and financial failure. But most of all, it's a story about what it means to be human and what it's like to live in constant pain...and to find relief in things that only make matters worse. Anyone who loves hockey (especially the Calgary Flames) will love this book. Ditto anyone who's been abused or anyone who struggles (or struggled) with substance abuse and suicidal impulses. Theo has written a book for both sports fans and those who don't care about sports. His story is painful, but it deserves to be heard. And hopefully it will help anyone who struggles with the same issues that affected him. Thank you, Theo, for writing this book.
Copyright © 2020 Thriftbooks.com Terms of Use | Privacy Policy | Do Not Sell My Personal Information | Accessibility Statement
ThriftBooks® and the ThriftBooks® logo are registered trademarks of Thrift Books Global, LLC